How To: Print Two Colors With One Nozzle

Learn how to 3D print one part with two different colors with a single-extrusion 3D printer!

Dual extrusion is a lot more commonplace than it used to be, but the different methods possible are as varied as ever. Some use articulating within the print head to change from nozzle to the other, some have multiple toolheads they switch back and forth from, some use one nozzle and purge out the old material, and some have two nozzles mounted to the same printhead. Each of these has their own set of advantages and disadvantages, but the biggest thing is that if your 3D printer doesn’t already utilize one of these, there’s some external cost involved in upgrading your printer to do more than one color or material in a print, unless you fake it.

Separate Parts is exactly what it sounds like, design the base piece you want and have the secondary color be a set of pieces that slot into the first 3D print. This is specific to models where you can get straight insertions and don’t have odd angles to work around. Take for example, this Optimus Prime figure. This was originally modeled by ChaosCoreTech, but I have seriously modified the STLs for it. It was designed to work around a filament splicing system to use multiple colors in the same part, instead what I did was make each other color a separate piece that would easily slot over each other. 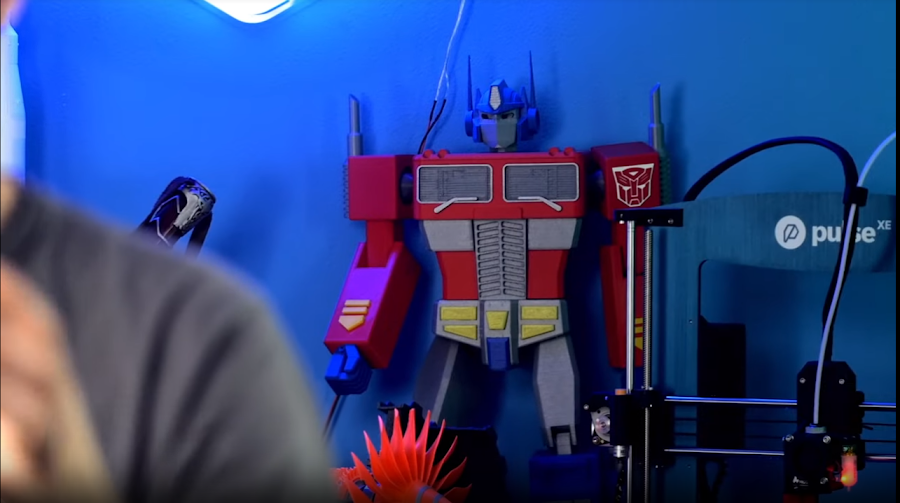 ChaosCoreTech's Optimus Prime has been modified to work with single extrusion printers without a filament splicer.

To demonstrate, let me show you how I designed the shift knob for my car: First I have the base piece here which I reverse engineered from the shift knob designed by Dingoboy71 on Thingiverse. The top and bottom sections are essentially the same, with some modification made for my car, which has an M8 threading for the shift knob instead of the M12 that the original was made for. 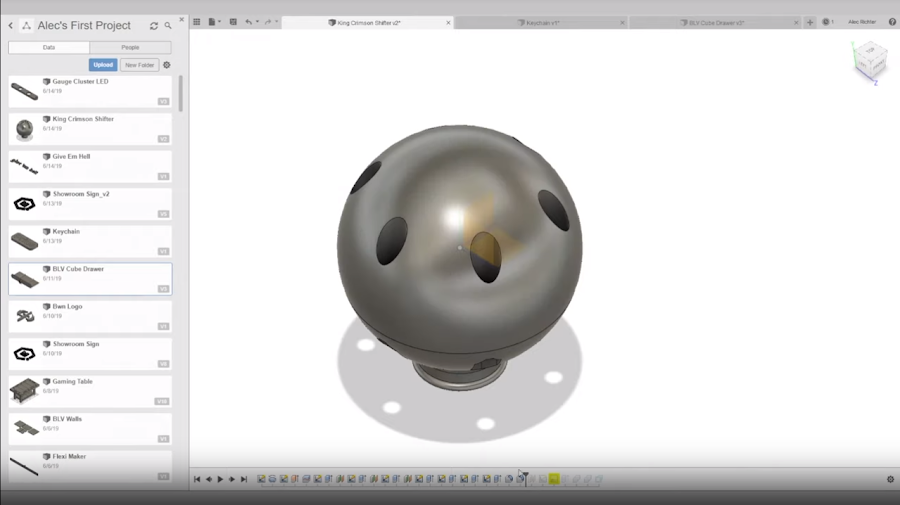 Once I had the base remodeled, I started by creating a reference plane above the surface, and sketching out the shape I wanted using the various sketch tools, then I extruded it into the body of the knob the depth I wanted and kept it as a “New body” instead of joining or cutting it out like you might initially think. The inlay before it has been cut out to match the contour of the knob.

Then I could use the modify>combine tool to find the intersection between the design and knob, keep that, and take this new body and subtract it from the knob. 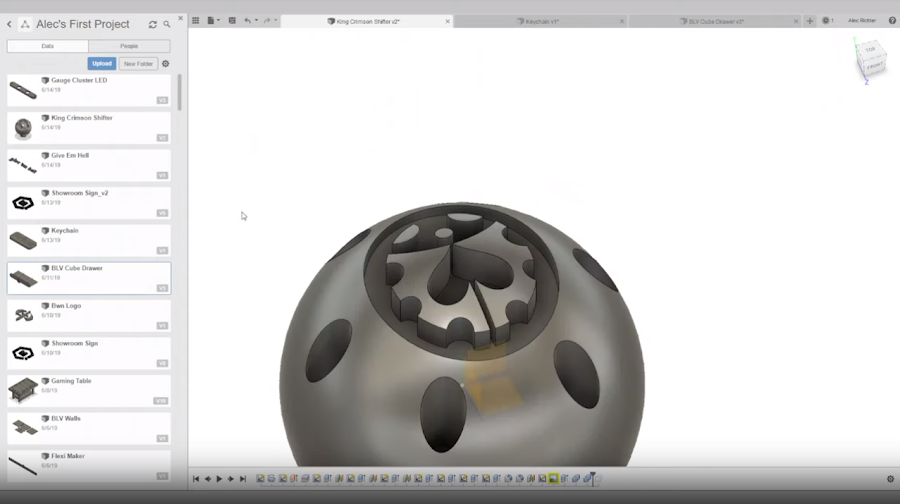 The inlay has been cut out from the knob, but will fit it exactly, without any wiggle room.

This will give a perfect puzzle piece for the knob, but 3D printers just aren’t that precise, for zero clearance tolerancing, so instead what we can do is hide all the parts except the inlay, and use the push-pull tool to offset all the side faces inward. This value is going to be fairly specific for your 3D printer’s capabilities; for mine, 0.2 provides for a tough but solid fit. 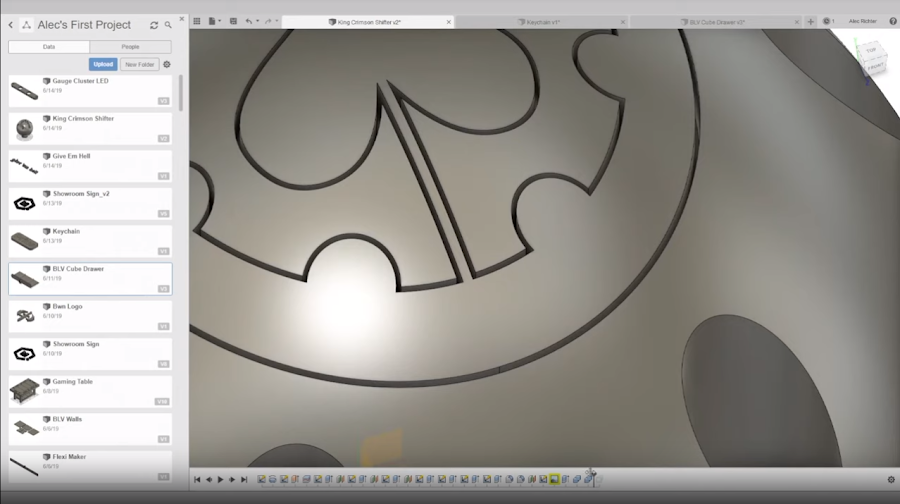 Layer swapping is one of the most commonly used methods, especially in the MatterHackers office. The design considerations are a lot simpler, but so are the final results. Design your model, pause your print (either manually through your LCD, inserting the pause Mcode into the Gcode you are printing (usually just M600, depending on your firmware), or pausing in your slicer you’re running from), change filament, and continue. We heavily use this method for the MatterHackers Hextile wall since it’s so easy to take a favorite logo or text and make it stand out against the background, and as long as you have different geometry per layer, then the color will come across. 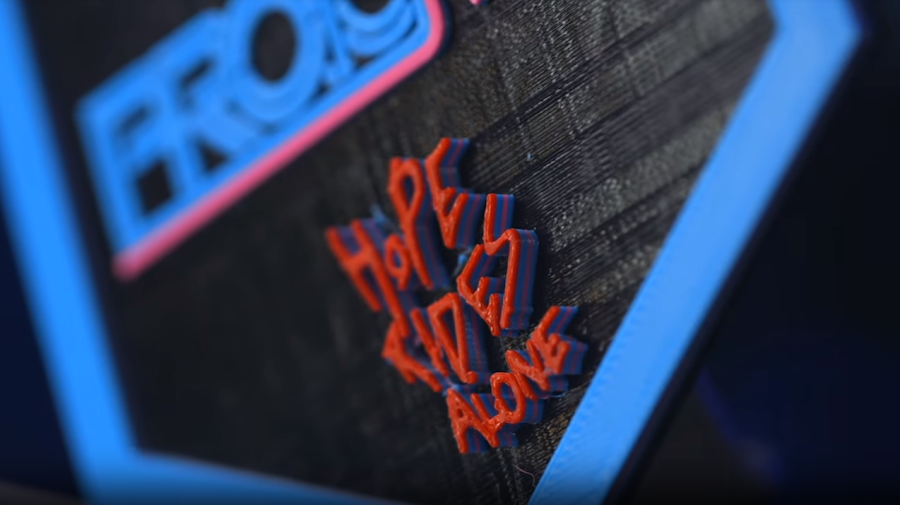 This hextile was paused four different times to get all the colors to come through in the right thickness.

First layer inlay is something that I first heard of from Devin from MakeAnything a little over six months ago. He developed a process of creating 3D models that have a lot of colorful detail on only the first layer, and then swaps filament for the rest. The set up is very similar to the separate piece strategy, except you can’t do complex tops; the inlay will be completely flat. 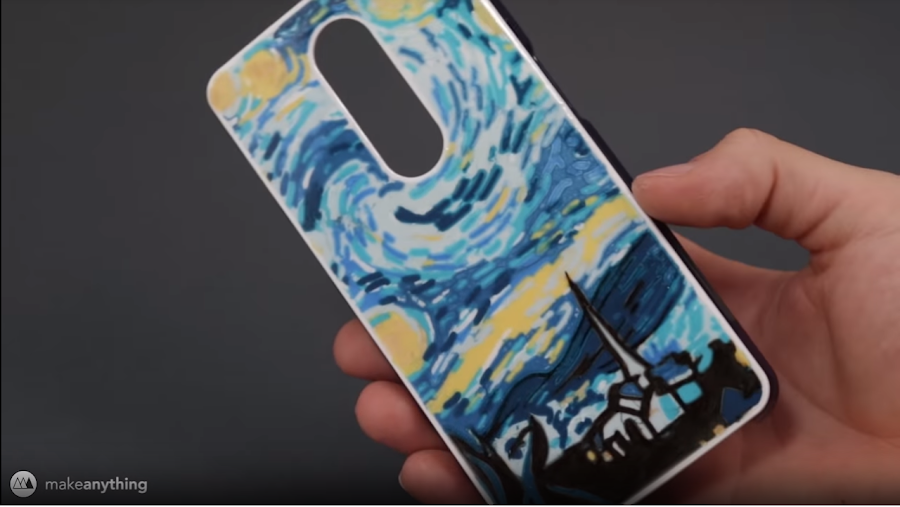 At home I am building a 3D printer that has a little drawer in the front, and I wanted a custom knob for it. To do so, I designed the basic knob shape in Fusion360, and created a pattern on the front I wanted to have in a different color, and did the same intersection and subtraction technique as before, except this time didn’t do any offsetting to the secondary colored parts, and made sure they were only 0.4mm tall. 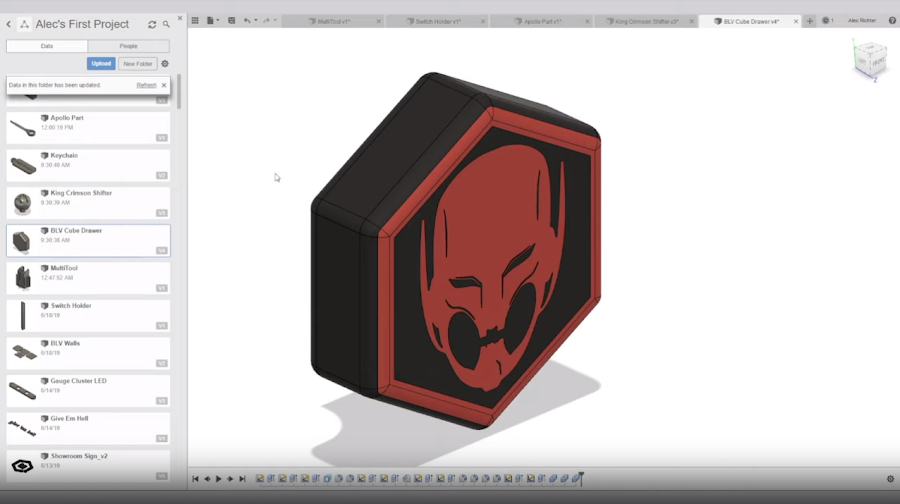 The knob in Fusion360 has no clearance, unlike the shift knob.

Once you’re in the slicer, you’re going to import all the parts together, and they should come in aligned to each other. Set the part in the center of the build plate and make sure that you don’t have a brim and your skirt is far enough away to not interfere with the primary colored part. Remove the primary colored part, slice, and start your print (or export to the SD). 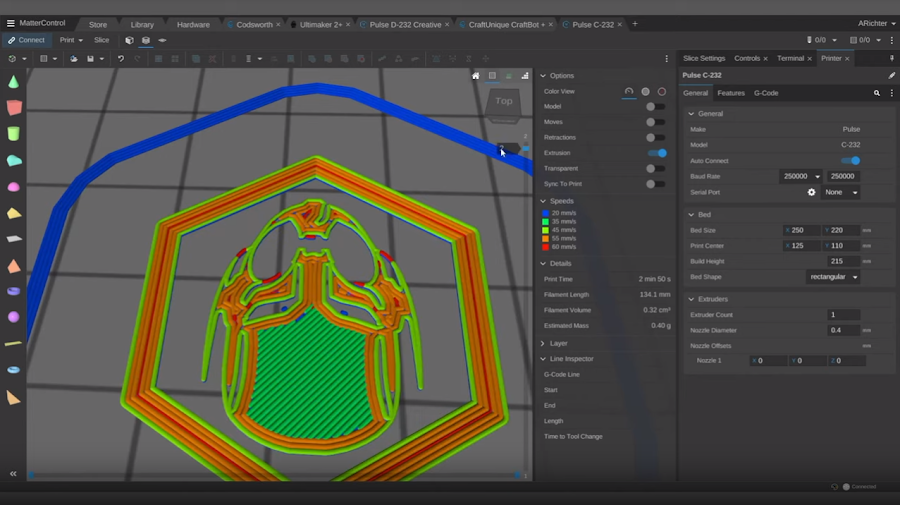 The secondary color sliced on its own, ready for printing. 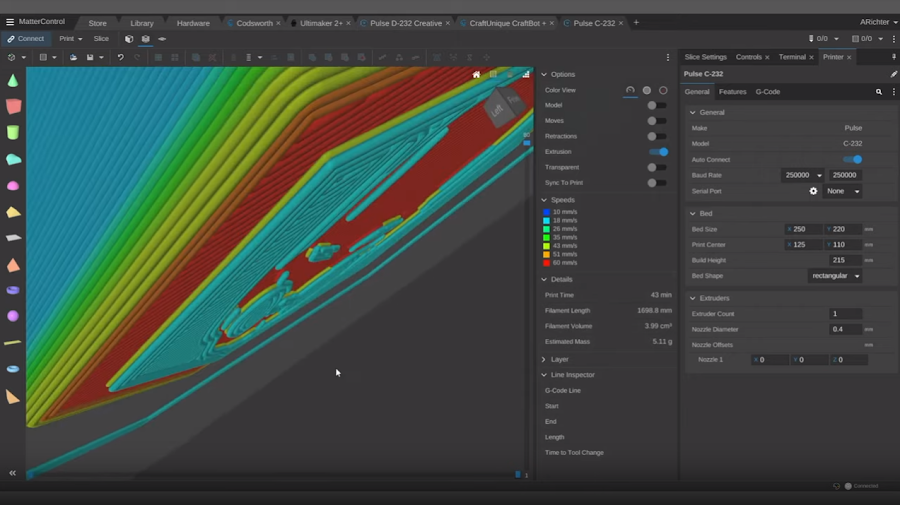 The primary color sliced on its own, without supports so it can melt with the previously printed inlay.

The print should go right over the top of the inlay and melt together cleanly, giving you a super cool two-tone print. Keep in mind that if your printing uses a probing method that requires touching the bed, you may have to either disable it, or instead start these prints in a position that will be clear of the probing routine. 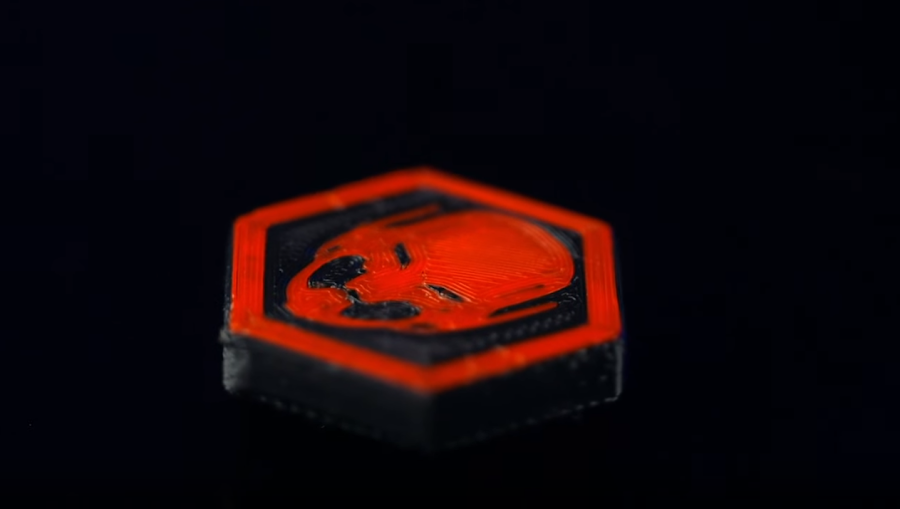 Top inlay is something I hadn’t considered until a coworker, Mike, showed me it, to which I’ve expanded and created a set of guidelines. Using both first layer inlay and top inlay, you can have a double-sided and flush design - like a double sided keychain. Create a first layer inlay like normal, then on the top surface, instead of extruding into the keychain and calling it finished, add a chamfer or draft angle to the extrusion. This will allow you to print multiple layers of the top inlay, so you can’t see through it (which is possible with one-layer only inlays). The taper is chosen specifically to leave enough room for the taper of the nozzle, making sure it doesn’t crash into previously printed layers. For this method, your procedure will be: first layer inlay, end print, main body, end print, top inlay, end print. Three prints in total to get this effect. 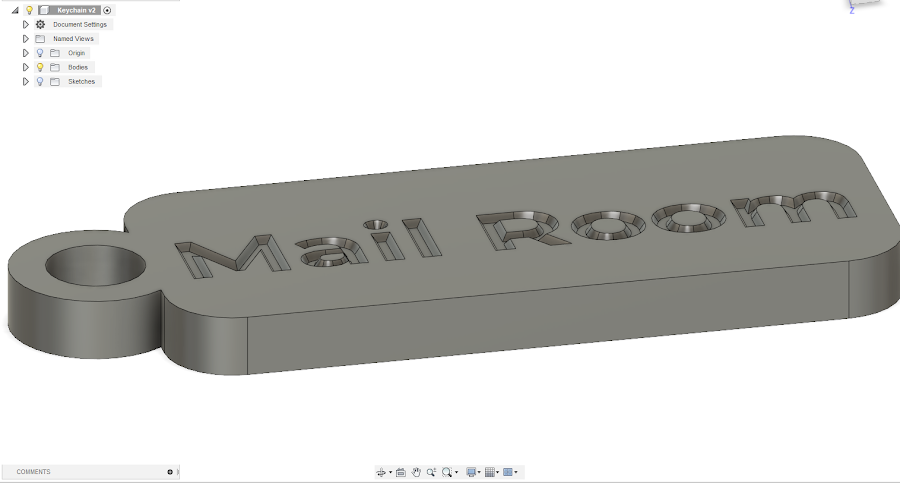 The slight taper to the walls of the letters allow for the nozzle to print in these cavities without fully smearing into the sides.

Each one of these has their place and utility, so don’t be afraid to try one out, find out it doesn’t work for your design, and think about how to incorporate a different method. There may be a point where you need to check out a new dual extrusion printer or a filament splicing method for the more ornate designs, and for that, you can check out MatterHackers.com. I’m Alec from MatterHackers, thanks for reading.