February 2020 Hacker of the Month, Garrett Durland, went from mechanical engineer to Creative Technologist through the use of 3D printing.
Chris Morgan
(EDIT)
Add a Comment | View Comments

Our February Hacker of the Month, Garrett Durland, originally hails from Denver, Colorado and currently resides in Oak Ridge, Tennessee. Garrett’s background is in Mechanical Engineering for a number of companies. “I spent 2006 to 2015 working as a Steam and Gas Turbine Engineer in the power generation industry. I worked for GE, Toshiba, and Xcel Energy. As an on-site traveling engineer, my duties included planning and supervising and routine and emergency maintenance of large rotating machinery. Then I moved to Oak Ridge to accept a job at Oak Ridge National Lab (ORNL) at the Spallation Neutron Source (SNS). I worked in the Central Cooling Systems group from 2015 to 2018. There I was a control room operator and the subject matter expert for some of the subsystems of the accelerator.”

He was first motivated to get into 3D printing by a friend after he learned that Garrett had been looking into numerous articles on Hackaday and Reddit about the subject. He then went out and purchased his first 3D printer, a Monoprice Maker Select, and was quickly bitten by the 3D printing bug back in November of 2015. 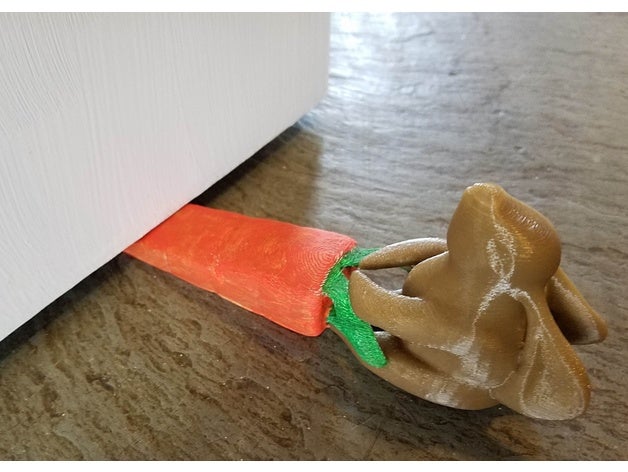 One of the many fun prints available in Garrett's Etsy shop.

Garrett started modeling his own creations in TinkerCad, which he still uses to make several designs for his Etsy shop. He is currently improving his skills in Fusion 360 and OpenSCAD, and he uses Meshmixer to help him sculpt, hollow his prints, and reduce the triangle counts on his models. He uses Cura and Simplify3D to slice his prints.

Soon after purchasing his first 3D printer, he was given a non-working Prusa Mendel IT2 clone, which he repaired himself, and then went on to build three more 3D printers! He primarily uses these printers to produce items for his Etsy shop, Sassy Centaur. His shop mainly includes gender-neutral bathroom signs that are infused with mythological and imaginary creatures. Garrett explains that “Gender-neutral bathroom signs make everybody less nervous about using a public bathroom. Hopefully, the humor in the signs will also send the message that it does not really matter which bathroom people choose to use.” 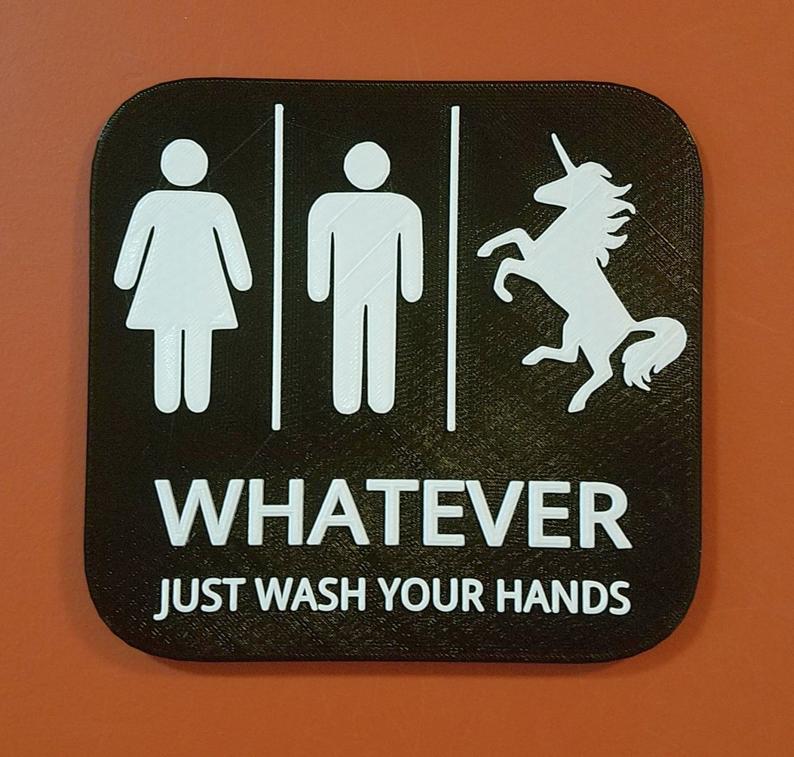 Garrett’s signs became extremely popular, and after 18 months of consistent growth, he was able to move on from his full-time mechanical engineering job into producing items for his Etsy shop as a profession. After this move, Garrett was able to create even more sign designs, as well as offer more options for customization that would not have been possible while working.

But Garrett hasn’t stopped there with his interest in making and creating. With his new label as a Creative Technologist, he has completed work for a biomedical imaging company designing and fabricating a non-magnetic holder for one of their scanning instruments from carbon-fiber PETG. “The part that I designed, printed, and delivered will help the company calibrate and complete reference scans with MRI-type machines.”

An image showing the stress testing of the non-magnetic holder Garrett designed.

Creating 3D printed items then led him to expand his material selection and he soon started to fabricate 3D printed molds for concrete planters. “In 2019 prior to the clay printer purchase, I made 25+ concrete planter pots of different shapes and sizes. With a three-part concrete planter mold, I was limited by the build volume of my printer, so I went big and made a 3D printed, 13-part mold, with the thirteenth part being a flexible ice cream tub that I rescued from the trash.” 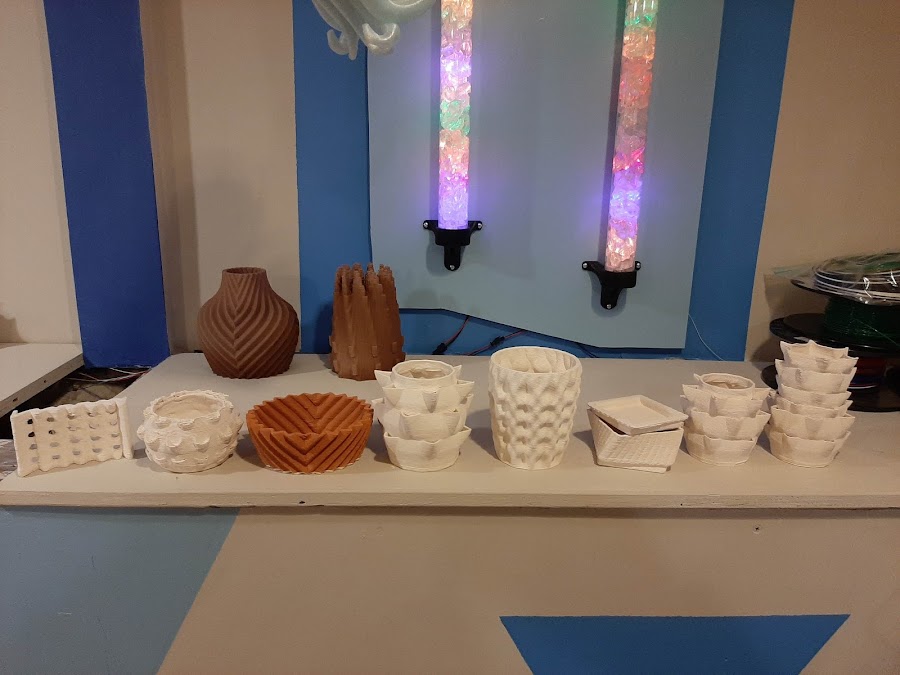 A collection of Cerambot pot prototypes Garrett may sell in his shop.

“I was able to make eight large concrete planters, but each one took a lot of prep work, and some of the mold sections that were printed with PLA are starting to crack. If I did it again, I'd print the mold in PETG, and change the design to beef up the areas that I found to be cracking most often. To sell large concrete products like planters, it will be more cost-effective for me to print them on a concrete printer, rather than using 3D printed molds.”

Soon after he backed a Kickstarter campaign for a ceramic 3D printer, the Cerambot. The Cerambot allows users to create objects from a viscous clay mixture that comes out of the extruder in much the same way melted plastics are extruded from a 3D printer. “So far, I've used low fire clay for printing ceramic models, but I would like to experiment with porcelain.” 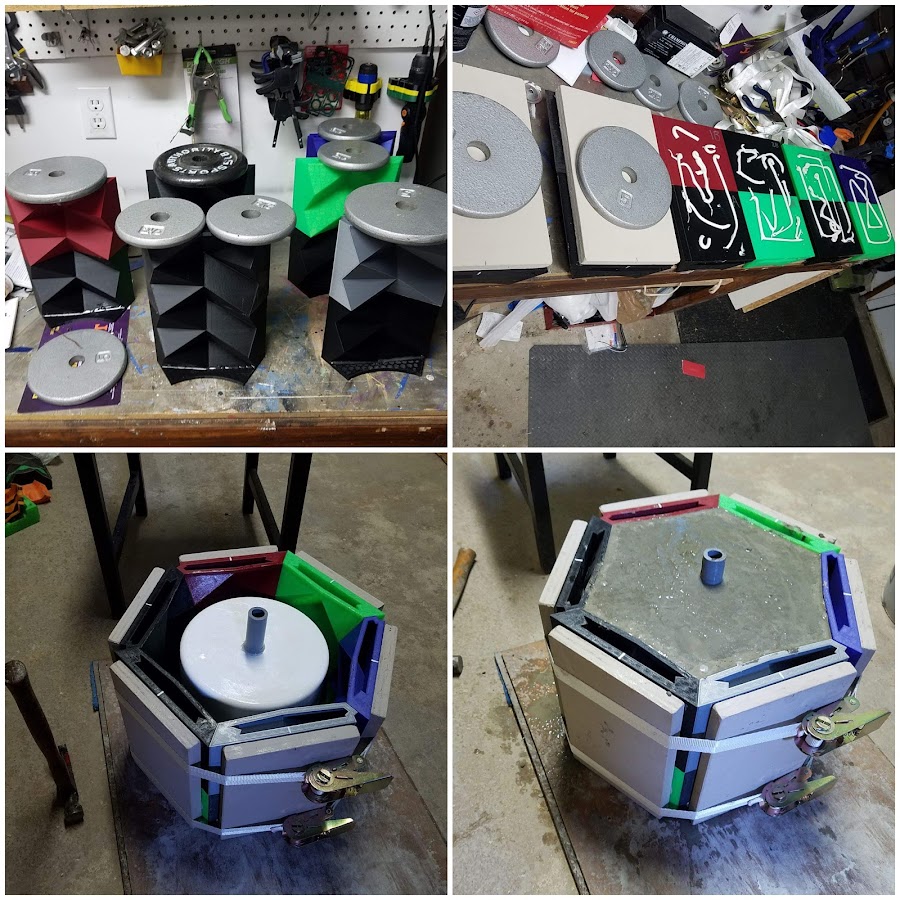 An overview of the molds and the pouring process for the concrete planters Garrett designed.

The major difference in 3D printing with clay is the post-processing; these objects need to be fired in a kiln to become sturdy pottery or ceramic pieces. With the loan of a kiln from a friend, Garrett has been experimenting with various clay mixtures for his Cerambot and will be adding these creations to his Etsy shop soon.

His interest in the Cerambot and his concrete pots eventually led him to an even bigger project; 3D printed homes. “Watching the clay as it printed on the Cerambot with a 2mm nozzle had me imagining bigger creations and asking, ‘What could I create if I had a concrete printer with a 25mm nozzle?’” 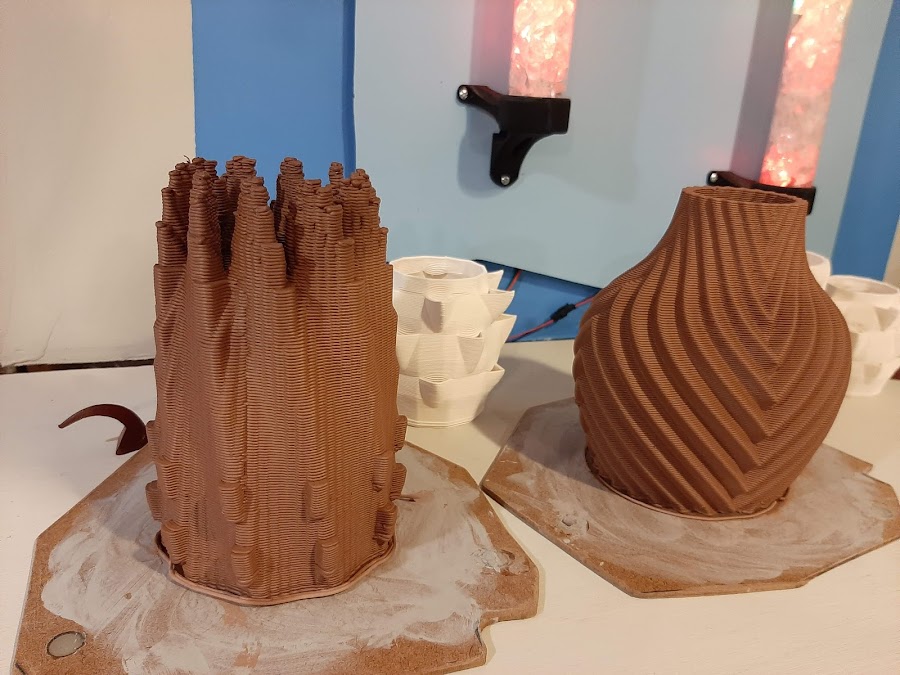 More pots created on the Cerambot

To this end, Garrett has partnered with Jessie Hawkins, owner of Solid Engineering in Knoxville, Tennessee to design and fabricate a full-scale, concrete 3D printer for use in creating homes.

“I'm hoping that large scale concrete printers for architectural applications catch on. I'm looking forward to the 3D printing community sharing best practices and how-to instructions for affordable printer builds of this scale. I'm also hoping new building codes and regulations can be adapted to make the permitting process smoother. Eventually, I would love to be on the team that designs and prints a community of concrete houses.” Understanding the basics with his home ceramic 3D printer has lead to many insights that will be useful in large-scale applications like 3D printed homes.

In addition, Garrett likes to share what he has learned with others. “I am currently developing some classes and workshops to be held in Oak Ridge. In 2018, I taught a circuit prototyping class, the Atari Punk Console class, at Knox Makers in Knoxville. I will be teaching this class again, and also several 3D printing classes where participants can have their model printed right in front of them. I'll offer classes in CAD modeling and slicing 3D printer operation, building a 3D printer, printing with clay, and perhaps some classes that develop soldering skills.”

He also hopes that in the future, 3D printing is more accessible to the general public, not just those going to schools or institutions. “I think every city's library should have some 3D printers so they can offer basic print services to members, hold instructional workshops and give demonstrations.”

We are excited to see even more from Garrett in the future, in all of his many endeavors - especially in the 3D printed homes industry. If you’re interested in purchasing any of Garrett’s gender-neutral bathroom signs, or soon to be available 3D printed ceramics, you can find them in his Etsy shop here:

Are you a 3D printing/CNC/Laser Cutting/digital fabrication maker and want to be our next Hacker of the Month? Email your story to chris.morgan@matterhackers.com and you may be featured in our monthly newsletter.