Darius McCoy finds inspiration in 3D printing with the Digital Harbor Foundation and uses his newfound passion to educate other students.

One of the most successful public makerspace models out there today is Digital Harbor Foundation in Baltimore, Maryland.  Founded in 2012 by Andrew Coy, Director of Operations Shawn Grimes, and Director of Education Stephanie Grimes, Digital Harbor Foundation offers flexibly-priced programming including Maker Camps for young people, STEM classes, and family make nights.  They also offer professional development programs for educators where they can learn how to teach 3D printing and educate on other Maker technologies for their students.

Their mission is to provide education to young people of varying abilities, backgrounds, and experiences, and no one is turned away based on what they can pay.  Former youth member Darius McCoy is a shining example of what’s possible when you present the right opportunity to the right kid. 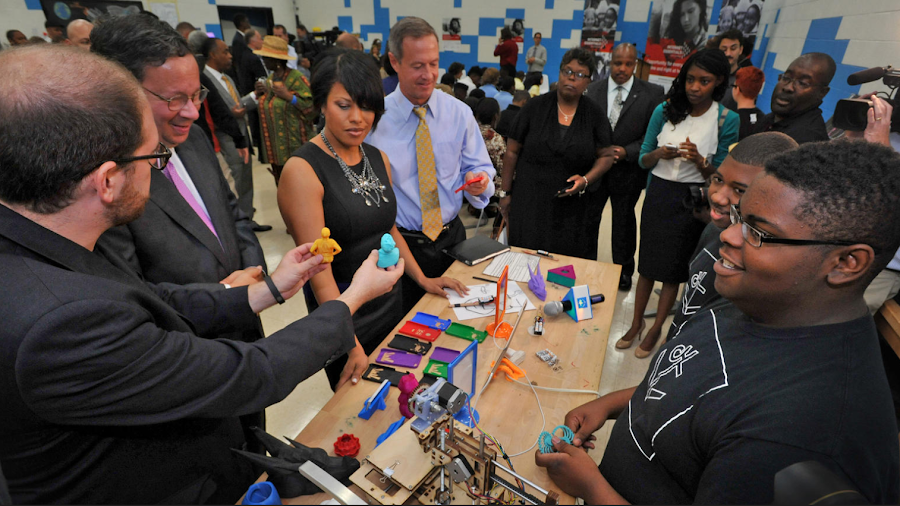 “Before DHF (Digital Harbor Foundation) I didn’t hang out with people outside of my neighborhood, so I was happy to be able to meet different types of people and interact,” says McCoy. “This betters me as a person because didn’t have a mentor or motivation to do anything before DHF.”

Darius first met Shawn in 2013 when a classmate told him about Digital Harbor Foundation.  He started with DHF summer camps at age 16. When he showed a real knack for working with 3D printers, he was asked to build a Printrbot Jr 3D printer kit.  Once he started on the project, he was hooked. Eight weeks later Shawn offered Darius a summer job working with 3D printing for elementary and middle school programs. 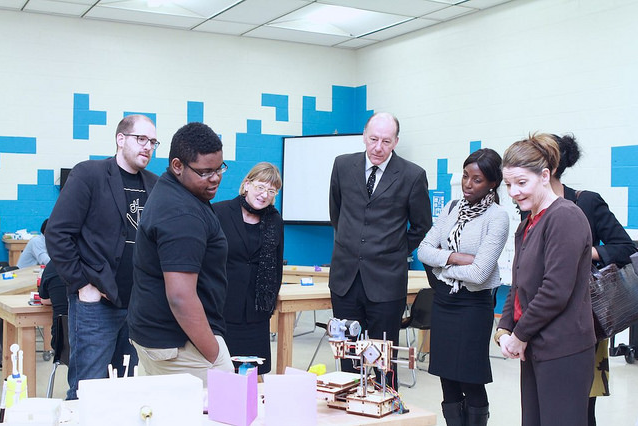 “First time I saw a 3D printer I was interested in how it worked, and it sparked a lightbulb in hearing about how you could use them to start a business,” says McCoy.  “I was printing iPhone cases at the time.”

Darius started attending fundraising events and Mini Maker Faires, including one at the White House in 2014 where he met Barak Obama and spoke to him about 3D printing.  At this time, Darius was starting a business called Frozen Lava, 3D printing iPhone cases. His first business venture was not that successful, but he learned a lot about entrepreneurship and how to use 3D printers more effectively.

After high school graduation, Darius was offered a job starting 3D Assistance - a repair service for the Printerbots used to teach educators about 3D printing at DHF.  Managed by two high school students, 3D Assistance morphed into a service bureau 3D printing orders for the community when Amy Hurst from the University of Maryland Baltimore County applied for a grant to research making and entrepreneurship.  With that grant, DHF opened 3D Printshop and Darius was asked to manage it. 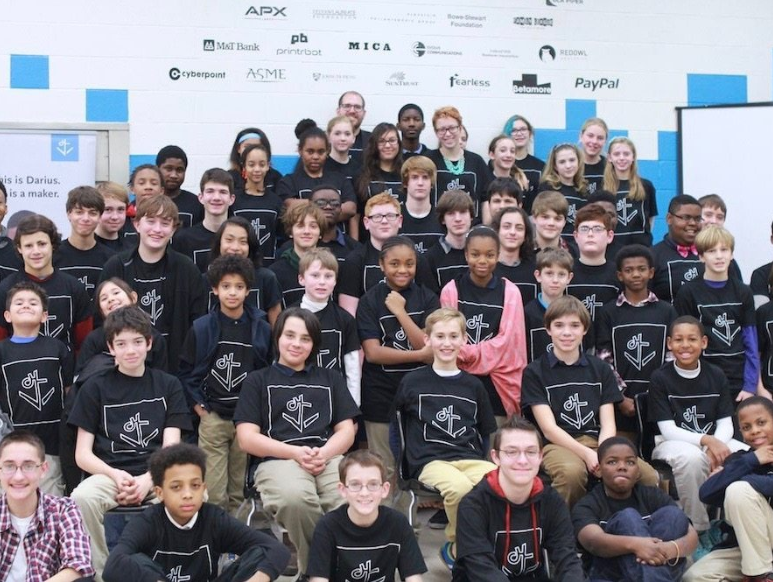 “I was able to learn more at 3D Printshop than I was learning in college,” explains McCoy.  “It’s a natural way of learning for me. I did way better at paying attention to things in real-life situations than in college, and I was able to improve my social skills.”

Their first service bureau project was to print 2000 braille rings for UMBC 50th Anniversary.  They made both child size and adult sizes and included the phrase “True Grit” in braille. The job took six weeks for the three employees to complete on four different desktop printers.

Another order called for 3D Printshop to fabricate statues of Martin Luther for a local Pastor celebrating the 500 year anniversary of his proclamation.  They made six models total - one was two feet tall! 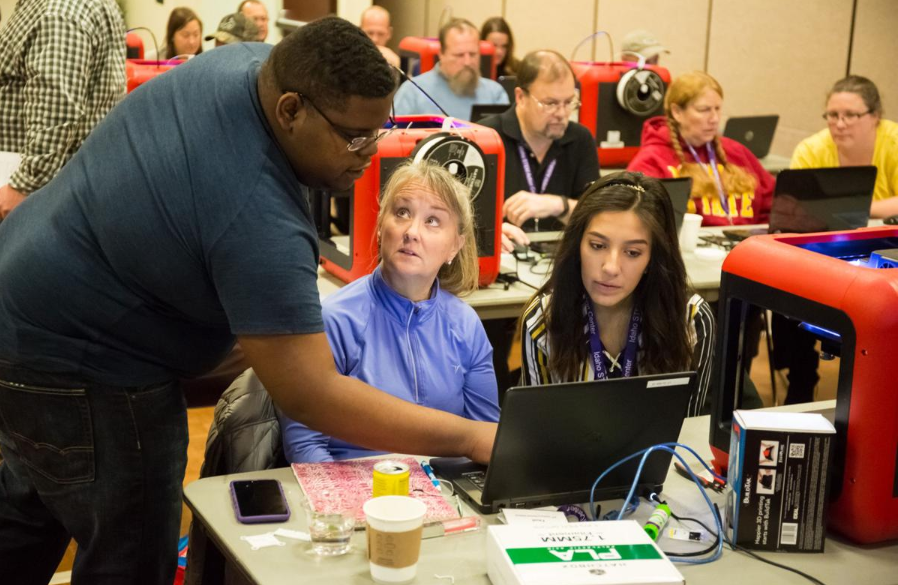 One of Darius’ favorite projects was working with a physical therapist at UMBC to make 3D printed assistive devices for patients.

“We have been printing their models ever since,” says McCoy.  “First we were printing prototypes, and now we are solving real-world problems with patients testing models.”

The first year of operations at 3D Printshop provided lessons on how to do better for the second year employees.  While the majority of customers provided their own STL file, more are now designed by 3D Printshop employees using Fusion 360. 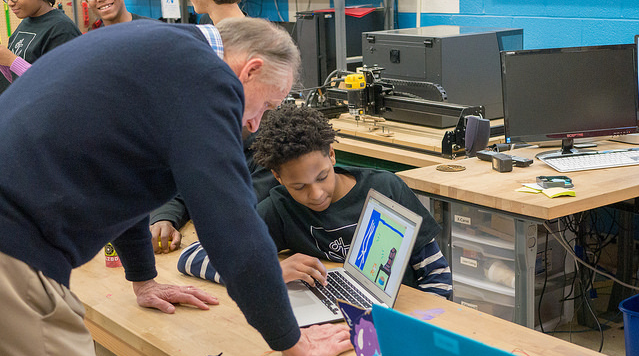 A new generation working with the community to spread the word about STEM.

DHF is starting a new entrepreneurship program in web design which Darius will be leading, leaving 3D Printshop in the capable hands of the young employees he has trained in using 3D printing and design to help clients.

“I hope telling my story to other kids, and seeing what I was able to do being in their shoes, they can see that they can do this or better.” says McCoy.

Check out Digital Harbor Foundation online for more inspiring stories, information on their programming, and to support their efforts in developing young people like Darius into passionate makers who will lead the next generation of innovation.  www.digitalharbor.org