Our Hackers of the Month for July 2020 are a team of industrial designers in Boonton, New Jersey, and an amputee war veteran and motivational speaker from England.
Chris Morgan
(EDIT)

Our Hackers of the Month for July 2020 are a serendipitous team consisting of industrial designers located in Boonton, New Jersey, and a motivational speaker from England who is on a journey to inspire other amputees by helping them unlock the door to their own resilient mindset.

Justin's Adventures Have Led Him to Many Amazing Places

The beginning of the story for our English Hacker, Justin Davis, began during a deployment in Afghanistan in 2011. While he was leading a patrol to intercept a Taliban ambush, he was the victim of an IED, which resulted in the loss of both his legs above the knee. His recovery and rehabilitation lasted nearly seven years, which included several operations to reshape the ends of his femurs to better accommodate fitted prosthetic socks. In the end, he resolved to have 10cm removed from the end of his femurs, finally ending his operations, and allowing him the freedom to heal and move forward.

After Justin’s long journey through physical and emotional hardships, his story is a triumphant one of recovery and innovation. He is now a motivational speaker who shares his message of "Inspiration through Adversity" for other wounded soldiers and other amputees looking to move forward in their own recovery towards a more positive outlook, as well as getting out into the world as adventurers like himself.

Justin’s recent accomplishments were to summit both Kilimanjaro, the tallest peak in Africa at 5895m, with his friend and fellow double-amputee, Hari, as well as Mont Blanc in France - again with his friend, Hari, and another wounded warrior, Stephen Handley. Their summit of Mont Blanc helped raise £5,000 for Great Ormond Street Children’s Hospital in London.

While completing his extreme summits, Justin was also thinking of ways to improve the experience of climbing and hiking for other amputees through more adaptable prosthetics. The configuration of each amputee can be different, which means that sockets, socks, joints, and the prosthesis itself can vary widely from person to person. Each point of contact is a place that needs careful attention so an amputee can be comfortable and efficient in their movements, while still maintaining the integrity of their amputation site. Even a minor variation in the fitting of a prosthetic can cause injuries that lead to chronic skin issues, as well as muscle and bone fatigue which can lead to serious infection.

Knowing there was an overriding need to be able to customize the fit for a prosthetic, not just for himself but for others, Justin began to research ways to implement fabrication methods that would work for everyone. A few Google searches later, Justin discovered Bionic Pets - which also led him to the second half of our Hacker team for July. 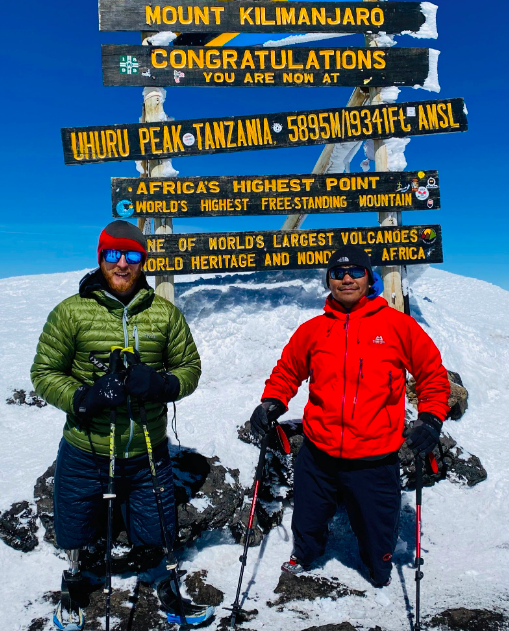 Justin and his friend, Hari, at the summit of Mount Kilimanjaro at 5895m/19341ft

Cutting to America, a small design firm in New Jersey, Dive Design Co., is where we meet our next pair of Hackers, Adam Hecht and Alex Tholl. They are a product design development studio dedicated to strategically building industry-shaping products and brands. From the various products they have designed - including scaling the brand content for a Finnish beverage company, producing the first haptic-wearable for athletes, as well as rethinking and remaking an electronic swiss army knife for campers - they were involved in revamping the process for creating harnesses for pets in need of prosthetics with Bionic Pets.

The original design process for Bionic Pets, who create full-limb prosthetics for dogs and other pets, was extremely labor-intensive. The original process involved creating a single full-limb prosthetic which took a minimum of 15 hours to complete. The process began by sealing the patient mold to prevent leaks, then mixing plaster to create the positive. Sheets of plastic were then heated and wrapped over the plaster positive, then trimmed and shaped further. Finally, foam was added along with hardware and the leg. Seeing that optimization was the key to speeding up the process, Adam and Alex utilized 3D scanning, and 3D printing and they were able to completely reimagine the way these prosthetics could be made. They also developed a custom algorithm to completely streamline the scanning to the printing process.

“The whole process has been contracted in terms of time and resources needed. There isn’t a need to employ a person to go through the effort of creating molds by hand anymore. The time investment has also shrunk considerably - where it used to take about 15 hours from beginning to end in terms of manpower, we have seen times as quick as 2 hours which is a major point of optimization. The scanning, file optimization, and clean-up of the final print, which includes hardware installation, are now the main time-draws.”

“The new process involves sending a casting kit to the client, and they wrap the patient with Ace-like bandages. Once they harden the molds are sent to us for scanning. We import the scanned mold into a custom digital tool that automatically generates the prosthetic, its thicknesses, mounting points, pattern, and more. From there, the 3D file is sent to the print lab where it is printed out of flexible materials like TPU and NinjaFlex.”

Through their work with Bionic Pets, Justin was able to find and connect with Adam and Alex to explain his concerns and ideas for improving human prosthetics, especially as it pertains to customization and quick iteration for testing. 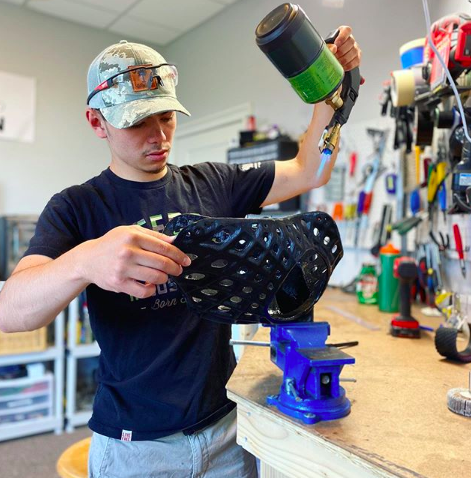 Their main focus has been in customizing a 3D printed ‘foot’ with varying degrees of energy return and flexibility for various activity levels. This also includes planning for future modifications such as different soles for varying terrain, as well as different shapes for activities outside of walking, such as rock climbing and running.

“Once I was able to start 3D printing some of the designs that Adam and Alex developed, and then take it off the print bed and use it almost immediately, I knew this was going to be revolutionary for myself and other amputees.”

Using the speed of 3D printing design, the trio was able to quickly iterate through a dozen designs to come to a model that worked in several different situations.

“It was a bit of a Goldilocks story to start with - one material was too hard, the next was too soft, the next model was too big - things like that. But being able to go over the designs remotely with Adam and Alex, the changes were adapted quickly from my feedback and it was almost unbelievable how quickly we got to a fairly optimum design.”

Several Prototypes of Justin's Foot, and the 'Final' Working Prototype

Even though they have only been working together for a few months, their progress has been fantastic, and they are hoping that the models they are creating will help out many more amputees in the future. To that point, the team says they are looking to create a process more than a product.

“As we saw when we created our digital tool for Bionic Pets, it’s much more relevant and impactful to invent a process for custom-fitting than a singular product. Because we have the foundation of 3D printing and 3D scanning, an end-user can complete this whole process themselves in the future with the proper, user-friendly interface. Once the scans are completed, creating different prosthetics with all these varying capabilities - it really is endless, which makes it much more empowering for any individual who wants to expand their current capabilities.”

With the amount of teamwork and motivation between these three, we really can’t wait to see how their progress leads to more and more capabilities for amputees all over the world.

To learn more about Justin and his summit of Mont Blanc as an Osprey Ambassador, click here: https://www.ospreyeurope.com/eu_en/osprey-blog/community/justin-davis-osprey-ambassador-and-double-amputee-climbs-mt-blanc/

You can also read about his summit of Kilimanjaro here:

To learn more about Justin, and to book him as your next motivational speaker, visit his website here: https://www.justinoliverdavis.com/