Mara visits CalTech and meets The Riveters - an all-female team of engineers competing for top honors in a 3D printed tank battle!

Every year, the Mechanical Engineering students at the California Institute of Technology in Pasadena are challenged to design, build, and operate a fleet of three robotic tanks that can successfully navigate, control, and defend strategic base positions on a grass course. This year marked the 33rd Annual Engineering Design Competition. There were six teams of four, and almost half of the participants were women.

Mara was lucky enough to run into The Riveters - an all-female team of engineers wearing iconic Rosie the Riveter ribbons. The tanks they entered into the competition were two-thirds 3D printed masterpieces. The tanks were all 3D printed in different colors to match an iconic female trio - The Powder Puff Girls! 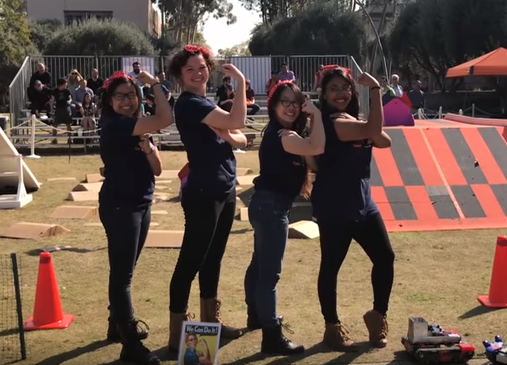 They used 3D printing primarily for parts that were not load-bearing and that would be hard to machine, like the motor mounts.  They also kept backup prints handy for on-site repairs in case of collisions on the course. They took full advantage of 3D printing for prototyping and testing their designs as they moved through multiple iterations as well.

Students fabricated their tanks using the MAKEiT 3D printers in the Caltech machine shop, or the Craftbots in the 3D printing lab, which can also be used for personal projects. 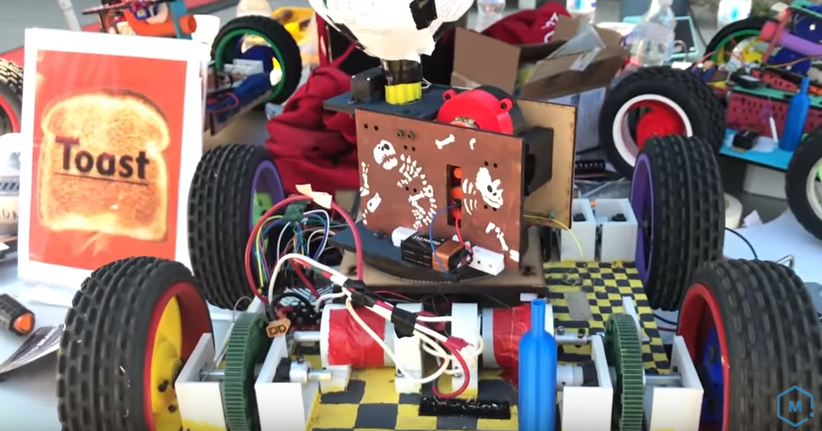 One competition tank in between battles.

Here is how the competition worked: The robots moved out autonomously during the first 40 seconds of the competition. Then the competitors were able to remotely control the robots to maneuver the following objectives; traverse and balance on a 10-foot seesaw, climb an elevated four-foot platform and push to activate a large button to capture a strategic position. While direct ramming attacks were against the rules, you could shoot Nerf balls at other robots, and if you scored direct hits three times, the embattled robot had to go back to the start.

Most teams operated two tanks at a time, so if one took a spill, they could swap it out for another one in their fleet. 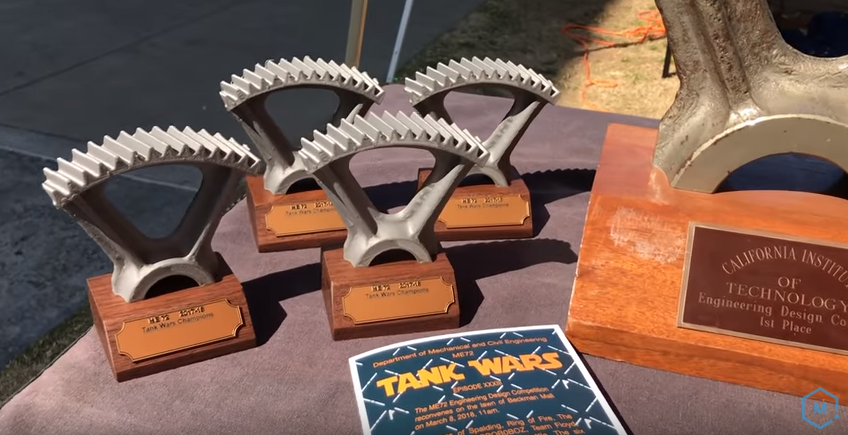 The competition featured robots with tank-treads or wheels for mobility, giant shovels or scoops to launch Nerf balls, and all the robots were built completely from scratch - no manufactured parts were allowed (except for wiring!).

The design of the robots typically takes about six months - and it gives the teams invaluable experience in what they would come up against in the professional engineering world. The iterative process of design, fabricate, test, redesign, fabricate and retest simulates typical industry cycles. So even though the end result is fun and exciting, the experience moving into the 'real-world' is invaluable.

The Riveters were the undefeated champions of this competition, thanks to strategy, engineering, preparation, design, and creativity. They were careful not to over-design, and in fact, scrapped their first design completely.  They designed their tanks to be reliable, and to withstand the obstacles on the course and finished two weeks early, so they had plenty of time to practice – and get a good night’s sleep the night before. 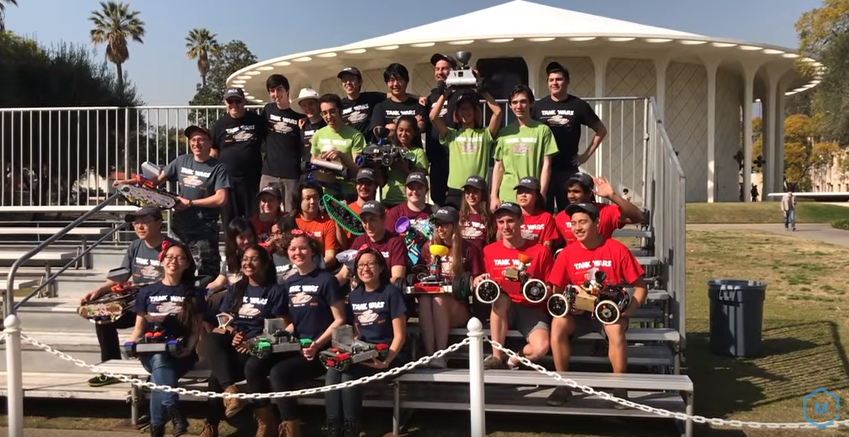 All the amazing competitors for the 2018 Tank Wars Challenge

Congratulations to The Riveters for a stellar performance – on International Women’s Day, no less!  Even the mini trophies were 3D printed on a LulzBot Taz 6. The large trophy is a portion of an actual steel gear which will be passed along to next year’s winners.

For more information about the teams click the link below.

Are you using 3D printing for an awesome school project?  Please leave me a comment – I’d love to hear about it.

I’m Mara and this has been your MatterHackers Minute.  Go be awesome!