Bringing Famous Landmarks to your Desktop with 3D Printing

Danny Sanchez, the founder of MiniWorld, creates 3D models of famous world landmarks for everyone to print and enjoy regardless of where they live!
Chris Morgan
(EDIT)
Add a Comment | View Comments

December Hacker of the Month, Danny Sanchez, wants to take you around the world - with your 3D printer! The creator of MiniWorld, an online catalog of 3D printable landmarks, Danny keeps himself busy keeping up with requests from around the globe.

Danny was born and raised in Mexico City, as well as Celaya and Queretaro in central Mexico. He has also lived in the USA, Thailand and currently resides in Morocco. It’s no wonder that Danny is involved in recreating world landmarks - he’s been to quite a few of them himself. 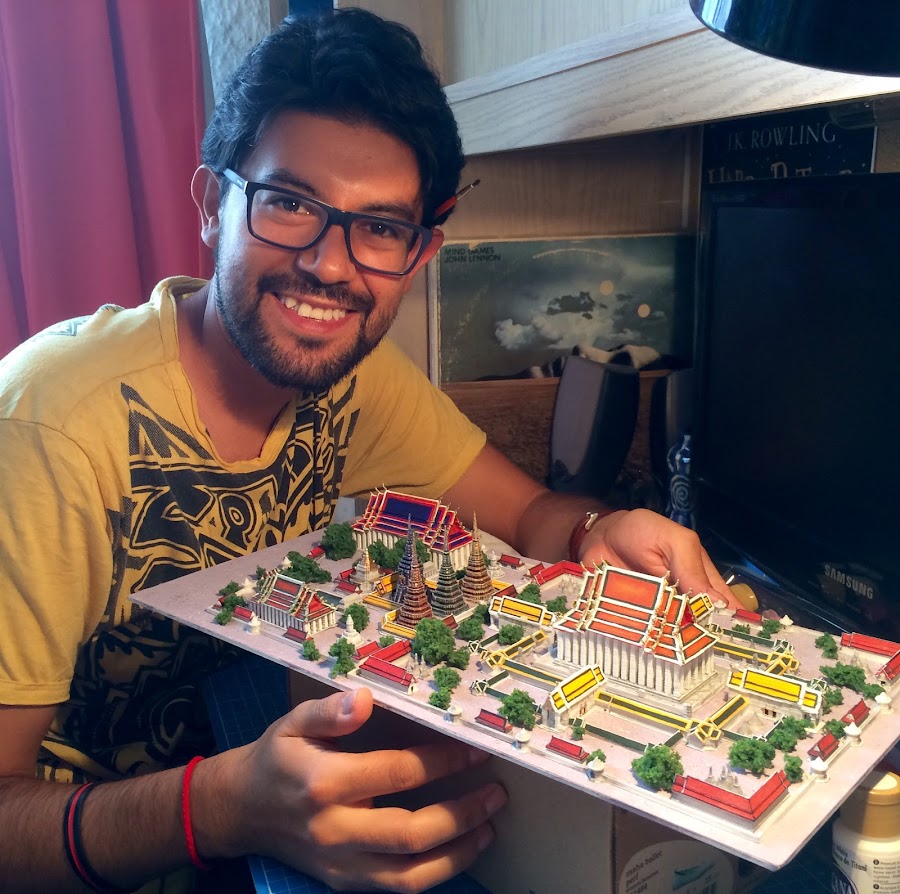 Danny is an industrial designer by training, with product UX/UI (User eXperience/User Interface) design being his main profession. During his time in design school, around 2009, he took several 3D modeling classes when 3D printing was still relatively obscure. The school owned a huge powder-medium 3D printer, which he was only able to use twice. Understandable, because back in 2009 the machine was extremely expensive to own, and especially cost-prohibitive to use for simple school projects.

But around 2012, Danny designed an inhaler for children with asthma and a couple toys for a contest, where the prize was a 3D printer. This being his first attempt at designing explicitly for FDM printing, Danny wasn’t expecting much, but he ended up winning the competition and received a Leapfrog Creatr 1.0, which started him on the 3D printing road he is on today.

Of course, having a 3D printer and making it work properly are two separate beasts, and Danny really got to cut his teeth on the Leapfrog, learning all about leveling, printer maintenance, calibration, clogged nozzles, and everything in between. But he learned a lot and became better at designing and test-printing, becoming more proficient in every aspect of 3D printing. 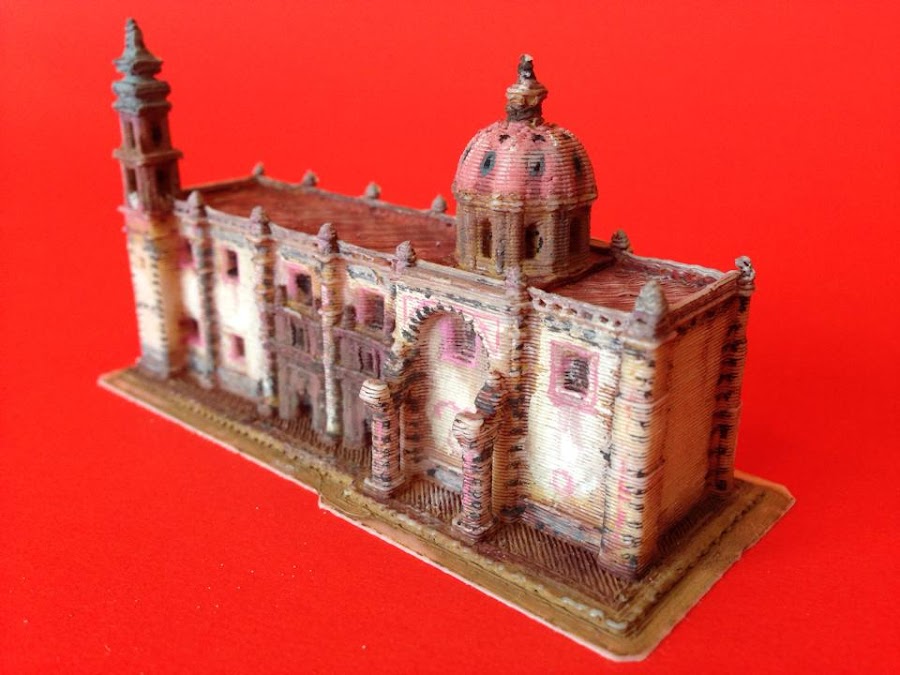 Currently, Danny’s primary 3D printer is an XYZPrinting DaVinci Jr. 1.0, which fits his needs. He primarily uses white PLA because he likes to paint his prints.

After 3D printing, using his industrial designing education and training, Danny uses several different post-processing techniques. For his MiniWorld prints he keeps it simple and just uses acrylics with small brushes - because they are so small, there isn’t much else needed to make them look amazing. However, when he does tackle larger projects like prototypes or props, he will sand, fill, prime, mask, spray paint and use other finishing details like decals to make his pieces look as realistic as possible.

Danny learned parametric and surface modeling in college with software ranging from SolidEdge, Inventor, SolidWorks, and Rhinoceros. Currently, he uses Autodesk Fusion 360 because it suits his needs, runs on a Mac and is great for modeling architecture and keeping his 3D modeling skills honed!

But what are the origins of his newest venture, MiniWorld? Danny explains, “MiniWorld’s origin is awesome. A friend asked me if 3D printing could help blind and visually impaired people know what famous buildings and landmarks are like since they can’t see pictures of them, or fathom the shape and scale by being there or just touching the walls. This triggered the idea in me of merging my passions for travel, 3D modeling, and helping others - and MiniWorld was born!” 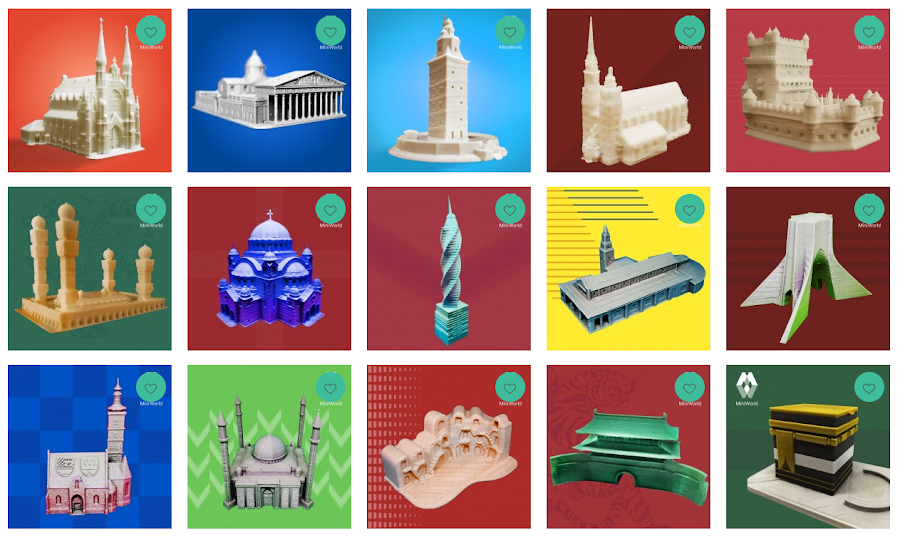 “What originally started as an excuse to keep my parametric modeling skills sharp has grown into an amazing venture. It has led me to connect with lots of 3D printing and modeling enthusiasts, printer and filament companies, and establish a brand and my name as a reputable creator and contributor to the ever-growing online catalog of STL files.”

“This is the most satisfactory effect of my work. Both with MiniWorld and as Danny Sanchez Designs I’ve been able to help people do things they’ve never done before. From the visually impaired feeling what the most famous buildings in their cities are like for the first time, to parents thanking me for the inhalers their kids use and love. And of course, regular 3D printing makers that thank me for bringing to life a landmark of their country or a great souvenir of their travels.”

Danny has also had his 3D models used in video games and virtual reality applications as well, giving his talents more than one professional and personal outlet. His new MiniWorld venture has also allowed him to involve old friends and new collaborators who have designed models or are helping to test-print new designs. Up until this point, without new relationships like this, Danny was trying to plow through a huge list of requests on his own. With new partnerships, he can now see a light, even if it’s a small one, at the end of the tunnel.

Danny also likes the sustainability of the virtual models he creates, “The time I put into modeling a landmark is valuable more than once - the file can be 3D printed as many times as wanted, in a variety of scales and materials, so my work can reach many more people. In addition, they have the liberty of customizing it any way they like.”

Of course, like most Makers, Danny hopes to see 3D printing become more accessible and inexpensive so others can make their own creations - and 3D print more of his creations as well! 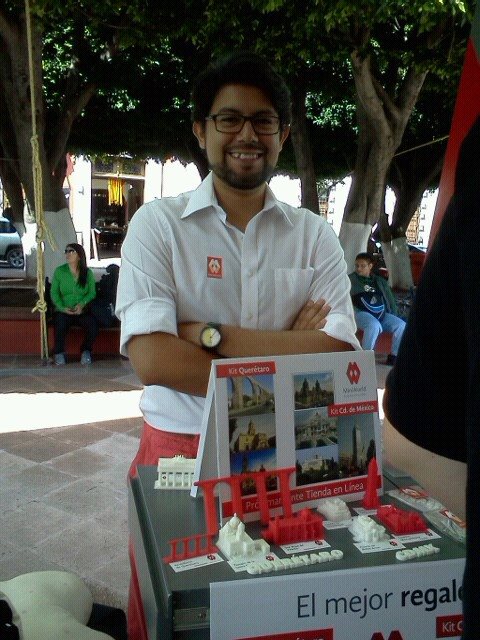 What is next for Danny? “MiniWorld is ever-growing; we have a queue of landmarks to create that grows faster than we can model them. Some exciting landmarks to look forward to: Pre-hispanic archaeological sites, Southeast Asia, Morocco, the largest catalog of buildings of Mexico City, and the full world map of The Legend of Zelda Ocarina of Time.”

We can’t wait to see all the incredible models of world landmarks that Danny and MiniWorld come up with in the future!

If you’re interested in browsing the MiniWorld collection of landmarks, you can find them on MyMiniFactory here: