July 2019 Hacker of the Month Ian Davis overcame a life-threatening illness and injury and designed a lifelike prosthetic to replace part of his hand.
Chris Morgan
(EDIT)
Add a Comment | View Comments

Our July 2019 Hacker of the Month is Ian Davis from Medford, Oregon, where he works as a prototype design engineer and steel fabricator. Since becoming an early adopter of 3D printing back in 2012 with his purchase of a MakerBot Replicator, Ian has refined his design, prototyping, and production skills to help him with his current project; creating a prosthetic for the missing digits on his left hand.

Unfortunately, Ian had to go through a ‘sack of suck’ (his words!) that turned him onto the design path he is currently on. He was diagnosed with multiple myeloma in October 2017 - a blood cancer that attacks plasma cells, and accumulates in bone marrow, crowding out healthy blood cells. In 2018 we underwent a 21-day cycle of radiation treatments to stabilize the vertebrae that were deteriorating from numerous tumors, followed by 3 rounds of heavy chemotherapy, as well as a stem cell transplant. He spent most of the year living in a hospital and was extremely ill. In August, after the critical 100-day post-transplant not dying period, he started consolidation treatment; low dose chemotherapy with a six-hour infusion once a week.

After this, Ian was finally able to get out of the hospital and return to work. Unfortunately, he experienced a work accident in November of 2018. “I didn’t let go fast enough and caught my hand in a machine at my shop breaking the proximal bones of my index and middle fingers. I found a hand specialist to surgically repair my work, but the stem cell transplant had left me with a very compromised immune system. Unfortunately, infection set in and I was not responding to the antibiotics, bone infection turned into blood infection, then septicemia, then gangrene, followed by the statement we need to take your fingers off or you’re going to die.” After several weeks of losing his fingers one by one to infection, the medical team was able to get ahead of the infection and saved his thumb and metacarpals.

But Ian is made of stern stuff - he began designing his prosthetic in January - just weeks after losing his final digits. “I went through many different renditions varying from four phalanges to two phalanges. After a pile of experimentation I settled on a compromise of a two phalange device, it offered considerably more strength than the four phalange version and allowed me to place the motors within the proximal area. It also allowed the whole device to be from wrist forward, nothing mounted on my forearm.” 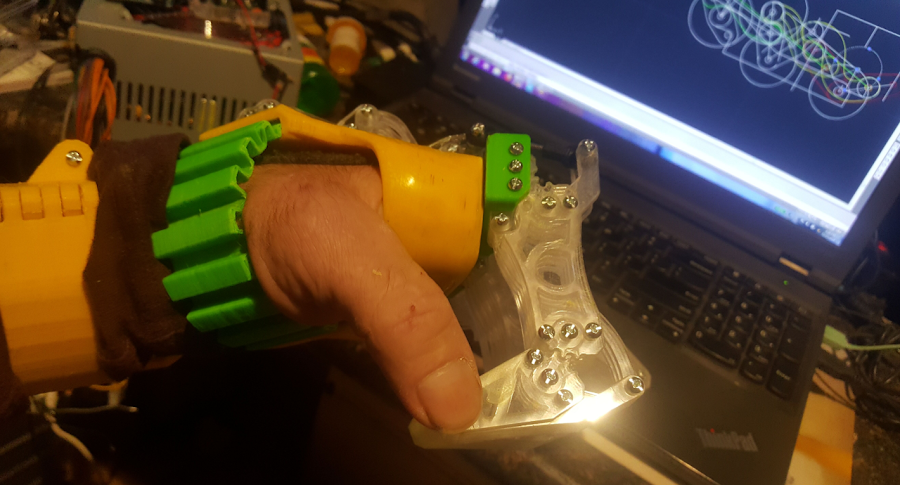 Ian articulates his prosthetic by bending my wrist. “I use a simple lever and teeter totters to distribute and balance the load. I also use elastic bands on the back of the fingers and a torsion spring in the distal to return them to 'home' position. I also have a torsion spring in the lever that holds it at a midpoint that slightly curls the fingers. It's just where I have the endpoints set at that makes it hard to see that it is wrist powered. I push to straighten the fingers all the way and pull to grasp. The use of the 15 chain makes the device a compliant mechanism, being that if it meets with resistance in the open position the chains will slack and allow the fingers to bend out of the way and not break. I have been running with it for about a week and a half now with pretty good success. I get a lot of notice and questions about it when I'm out and about.”

Ian designs all his work in AutoCAD and has been since 1989. He also has decades of experience working in manufacturing and production of working and prototype models in metal and plastic. “Since I have started in plastic 3D manufacturing, I have made various improvements to machines to improve either needed job-specific functionality or to aid in the manufacturing of other parts. I have used 3D printing to make fixturing jigs for my 3-axis CNC milling machine. Sometimes you just need a little more support to hold a complex part and a 3D printed anchor is a quick and economical way to achieve that.”

Ian has used his design skills for numerous applications; “In my business, I have made replacement car parts that are no longer in production and hard to find, working from the remnant part to create a replacement part. From NylonX I have made the adjustable clutch tension gear set for a mid-‘80’s Ford Bronco; a terrible design that wears and strips, and then your car is parked. I’ve also made custom vents and light housing.”

He has also created many little knick-knacks for around the house, varying from mirror brackets and shower curtain rings to miniatures and figurines.

Overall, Ian has designed and created hundreds of items for a huge variety of purposes, and he sees additive manufacturing as a major factor in the development of his prosthetic. “Additive manufacturing has allowed me to design and fabricate parts that otherwise would be

difficult to produce using other conventional manufacturing processes. I have also adapted the same process theory used in 3D printing to other CNC machines. For instance, I have attached a custom straight MIG gun to my CNC plasma to ‘weld 3D print’, either to automate a production welding process or to additive-weld a boss or feature to later be milled into dimensional requirements. I have also used this to add weld detail to an ornamental iron railing, anything from details on flowers to leaves on flowers.”

Ian currently works with his OG MakerBot Replicator, as well as a SeeMeCNC Rostock v2 and a Peopoly Moai 130 for highly detailed work. He also has a large format 3D printer that he designed specifically for his shop.

Many of the designs that Ian creates call for ABS and carbon-fiber infused NylonX filament. He does use post-processing for his functional parts, mainly light sanding and acetone wipes to smooth out layer lines. 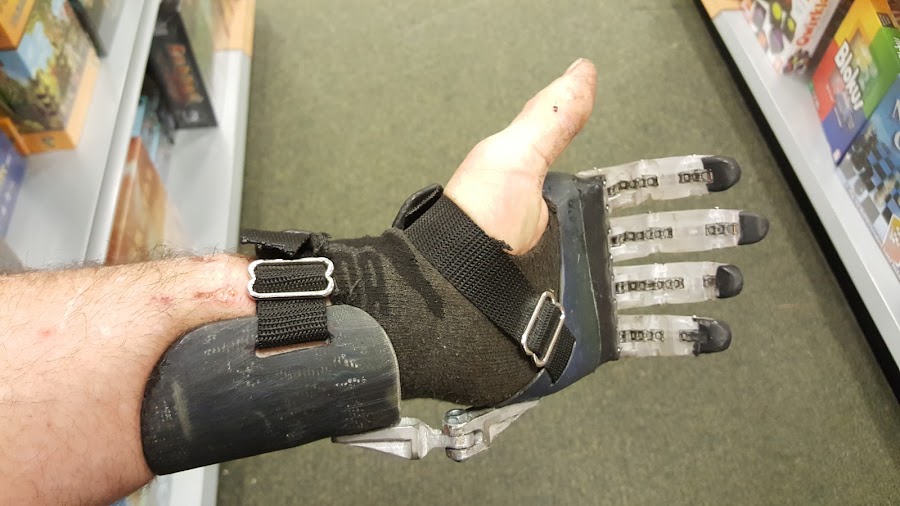 What new developments does Ian hope to see from 3D printing? “In the future, I would love to see resins and filament quality and adhesion improve so that “real” parts can be made using this process rather than de-rated strength parts. The process in which additive manufactured parts are created is inherently the cause of the weakness; layer by layer creation is where failure usually occurs in the plastic reproduction parts. You can mitigate that to some degree by part orientation and how the filament is laid down to build the part, but there is still a built-in weakness in the part.”

But Ian does see that access to 3D printing and design software much more open now than in the past. “With the drop in machine cost from where it was when I started, the accessibility to machines and software is really to the place where anyone can digitally design. I think that the real problem is that the maker culture and ideal is, unfortunately, a very small market sector compared to the straight-up consumer market. Being inside the maker culture you don’t see it as much because you are surrounded by like-minded makers, but when you deal with the general public you realize that most people are happy with what is offered to the market rather than having the spark to create something custom and unique.” 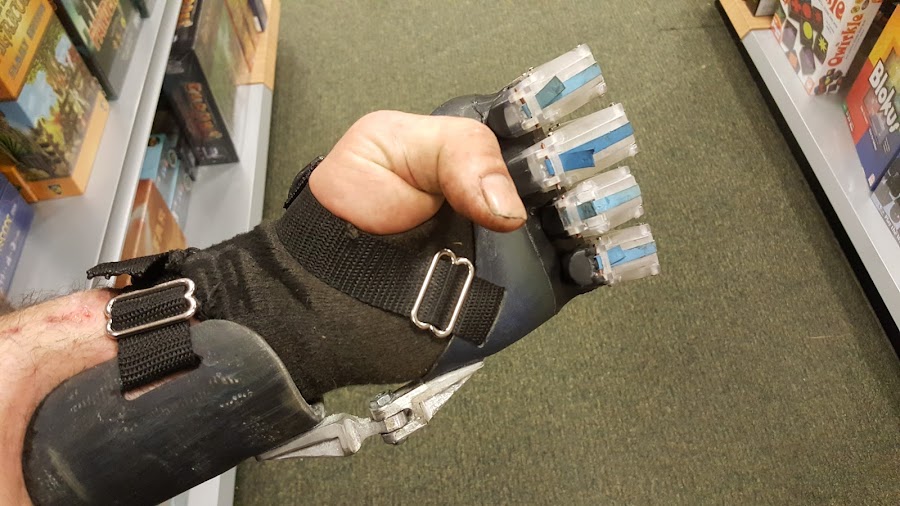 Ian’s future plans are to improve upon his designs for his prosthetic, not just for himself, but for others as well. “My main focus currently is to break into the bio-med engineering market to further prosthetic design and development. Advancement in the design of prosthetic hands hasn’t seen a dramatic improvement in decades. Implementing current developments with microprocessors and sensors could really help restore functionality and sense to a missing limb.”

We look forward to seeing the final product of Ian's efforts, and how he can modify his prosthetic for various other applications.

You can follow Ian's progress on his new builds and design iterations on his YouTube channel here:

Are you a 3D printing Hacker or know someone that is? We would love to share their story with the 3D printing community! Please email chris.morgan@matterhackers.com with information, and you or your friend could be our featured Hacker of the Month.