Artist Duane Koyawena and engineer Joe Mastroianni combined their passion and skills to create a unique droid known as Hopi-R2 for the Museum of Northern Arizona.

In Flagstaff, located at the foot of the San Francisco peaks in northern Arizona, nestled in the ponderosa pines, lives a large, diverse population. The people of the nearby Navajo and Hopi reservations, students and teachers of Northern Arizona University, and the almost year-long influx of tourists as Flagstaff lies at the crossroads of a multitude of cultural and geological sites in northern Arizona including Sedona, the Grand Canyon, the Petrified Forest, and many others. 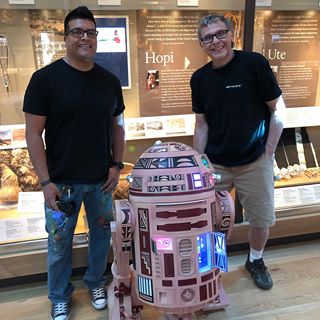 As a dude who was born and raised in Flagstaff, I like to keep an ear to the ground about what’s happening near my hometown. A friend from Flagstaff shared an event that was going to happen at the Museum of Northern Arizona, and I was introduced to Duane Koyawena and Joe Mastroianni from their social media posts about a unique project they were collaborating on; a one-of-a-kind R2 unit named Hopi-R2. A cultural amalgamation of artistry and engineering pulled from the nerdiest corners of every Star Wars fan’s mind. As the Museum of Northern Arizona site states, “Hopi-R2 is a blending of traditional pottery motifs and contemporary technology, a balance of ancient cultures and futuristic ideas, a collaboration between a Hopi artist and an electrical engineer from New Jersey.” The museum exhibit, titled “The Force is With Our People”, runs through March 2020 and highlights the merging of Native American art and the mythos of Star Wars; two stories that share many things, especially the meaning of balance in the world.

Before we get to Hopi-R2, let’s examine the worlds that Duane and Joe came from to join together to create this amazing artifact. 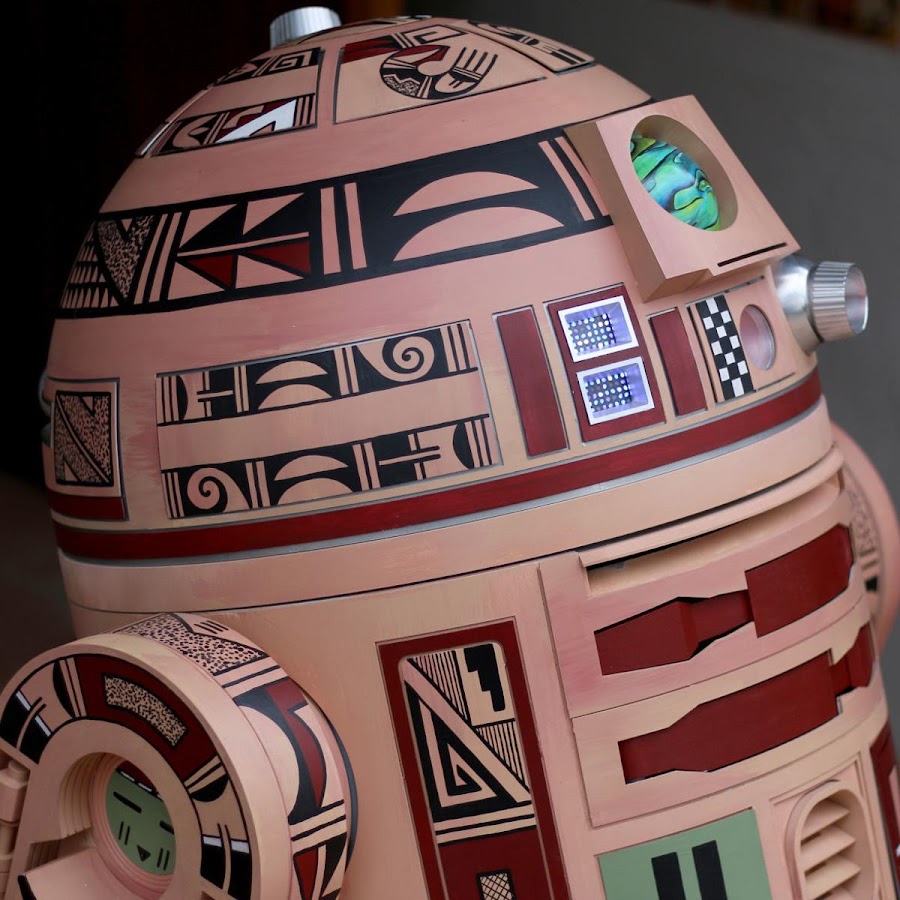 As a youth, Duane grew up with art in his family. His father was an artist who created many pieces that reflected their culture and heritage. Unfortunately, his father lost a long battle with alcoholism and passed in his 60’s. At that time, Duane started to follow in his father’s footsteps somewhat - he had a rough go of his late teens and early twenties, especially with alcohol. He explains that this time in his life was his “Dark Side” - he manipulated, stole and lied to get what he needed to get the next bottle of booze. His troubles eventually landed him in jail, where he was able to sober up and regain his footing, but he emerged from incarceration with little hope for being successful. Luckily, the help that Duane received post-release helped him realize that success was something that was achievable, something that was personal, and something worth pursuing, even if there were failures along the way.

Once he was released, Duane used his natural, self-taught artistic abilities to create art for custom apparel, mainly shoes, to kickstart his reputation. After getting some momentum and notoriety, Duane started giving talks on recovery with art in presentations called ‘Parallels’. He discusses the parallels in moving out of addiction and into sobriety in much the same way he pursues art; you have to start somewhere, and you have to practice both daily. The Parallels presentations are a form of expression through art with groups of people who want to learn about Duane’s path to sobriety. Called a ‘Coping to Resiliency’ talk, Duane shares his life journey of art and recovery with a special painting session. 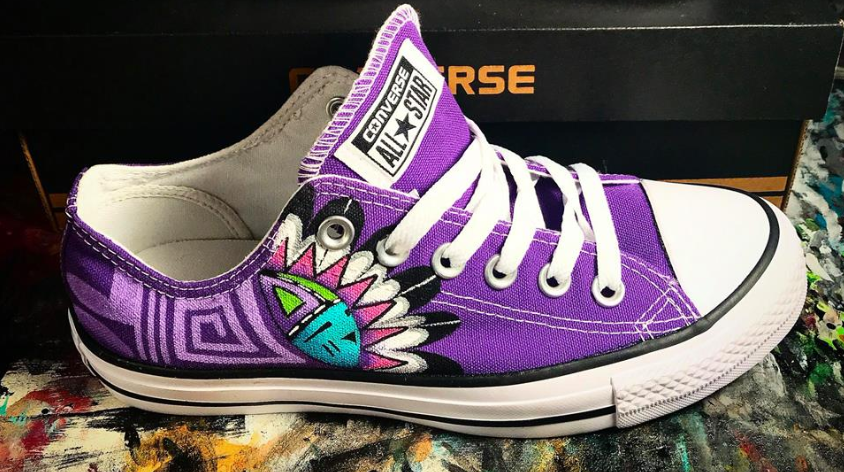 Duane has also created a second, artistic resource for the community; a traveling art exhibit called PIVOT: Skateboard Deck Art with his friend, and local Navajo tattoo artist, Landis Bahe. As the Museum of Northern Arizona website explains, “This exhibition reflects our lives – unique yet universal. PIVOT refers to the quick transitions we make between our traditional and day-to-day lives. We often work in cities while continuing to contribute to our ancestral communities and homelands.” The exhibit has just completed a run at the Museum of Northern Arizona and consisted of nearly 100 skateboard decks painted by artists from different cultures and backgrounds from dozens of walks of life, including Zuni, Hopi, Navajo, Comanche, O’odham, and Latinx artists. While the exhibit itself has ended at the museum, Landis and Duane still hold PIVOT workshops with at-risk kids, who get to take the skateboard decks home at the end of the project.

The program helps kids who are in-between their native culture and the more ‘modern’ society of today, surrounded on all sides by screens and distractions. The program helps them ‘pivot’ back and forth between cultural and family tradition and the demands of a technology-heavy, fast-paced world. These last eleven years for Duane, moving forward in a good way, getting sober and staying that way, he sees as his balanced “Light Side” and knows the perils of how close we all are to moving back across that line to the other side. Giving back to kids, freely expressing himself through his art, and giving a voice to others that are experiencing what he went through is his way to help himself and others restore balance to their lives. 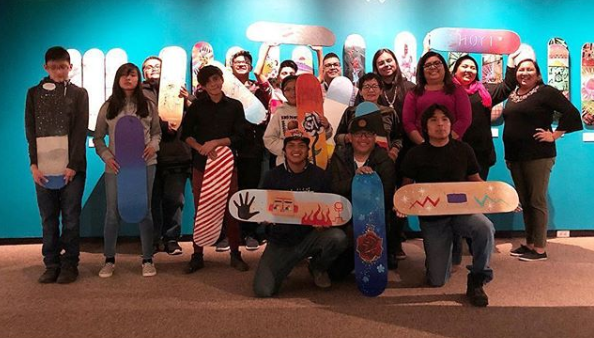 Duane works extensively with others that need a way to reconnect with their native culture and deal with the everyday pressures and stress that the modern world can place upon them - especially kids. Speaking to kids and working with them on art - like painting skateboard decks - gives them a window on a world they may otherwise not have looked through to see what is possible. Duane believes getting that chance, that view into a culture that otherwise may have been lost, and then inspiring them to take that crucial first step, is worth all the effort to prevent what he had to go through. To this end, he is also a dedicated mental health technician at the Behavioral Services of Flagstaff Medical.

On the engineering side, Joe Mastroianni comes from the east coast, New Jersey. He and his wife, Kris Hutchison, director of marketing at the Museum of Northern Arizona, met in the most unlikely of places - Antarctica. Joe and Kris were both working for the National Science Foundation - Joe on a project, and Kris as the lead on the McMurdo Station newspaper. Joe and Kris then moved to the bay area and were long-time volunteers-turned-employees of the Bay Area Maker Faire in San Mateo. The local Astromech club that attended MFBA was their first introduction to droids and droid building - which started with just R2 units but grew to include almost every droid imaginable at one of the largest Maker Faires in the world. Joe and Kris are both passionate Makers from way back in the day - from wearables to “Musical High Voltage Tesla Coils” to robot toys for kids. 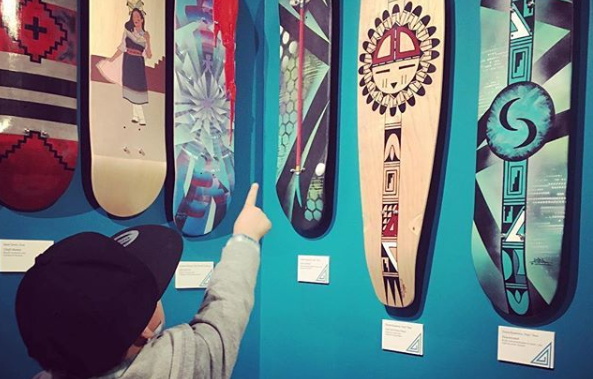 Joe and Kris moved to Flagstaff as a compromise - it’s not snowy tundra all the time, it’s not a hot desert - but the weather is moderate, and the heat (where Joe has always wanted to live) is only a quick hour-drive away.

The impetus for the beginning of the R2 project came from Kris when the museum authorized a Star Wars exhibit and she came home with a request “Can you build me an R2 unit?” Not an odd request in a house of Makers! Drawing on his relationships from Maker Faire, he tried to get units for the show from friends in Calfornia and even Phoenix. But with the weight of the R2 units in question, there wasn’t a feasible way to transport them without serious risk of damage. So, Joe got to work making his own R2 unit - from scratch.

Joe decided that since this build was going to be for the museum, he wanted the R2 to be all metal - aluminum. He wanted to withstand whatever the general public might do to it. Joe explains, “Going all-metal meant that many parts would require precision machining - which I don’t have the capability for. I do have full-sized manual lathes and mills in my garage - but no CNC (though, trust me, after this I’m in the market for a full-blown metal CNC).  And through the club, I was able to find other builders and get recommendations and thus I was able to acquire my aluminum water-jet cut dome.”

After receiving the dome, Joe quickly realized that the R2 unit would need to be painted - and since he wasn’t an artist, nor native to the Colorado Plateau, he would need help.

“So I contacted my buddy, Duane Koyawena, and asked him if he thought he might be interested in painting R2. And if he was to do it - then all bets were off. I would work strictly on mechanics and electronics and he would have free reign to do whatever he wanted for appearance’s sake. After several meetings, before I started any serious construction, but while I was gathering components with the help of my mentors at Astromech, Duane decided the motif would be “Hopi Pottery”. Then, after several visits where we tried to figure out powder coating vs traditional priming, paint materials, etc., we had a plan.”

Construction of Hopi R2 took about seven months to get it to the point where Duane could start working on pieces that weren’t attached to Hopi R2. In the final month, Duane was relegated to the floor next to Hopi R2, as it was too heavy to lift onto a platform.

Joe credits the input from his friends in the Astromech world, who supplied not only advice but droid parts that they machined and regularly provide to other astromech builders. The overarching piece of advice that Joe would pass on to other prospective R2 builders - tolerances vary.

“While there are “master drawings” somewhere, not everyone follows them with the same rigor, and almost nobody agrees on detail. I bought my CNC-billeted legs from one guy, my welded “ankles” from another guy, and the steel feet from a third guy. Getting all this to work together took many hours at the milling machine drilling and t-tapping holes that were specific to my build because of the way I chose to acquire parts; milling out slots, and trying to get pieces to work the way the provider intended.”

The end result of Hopi R2 is a testament to the power of friendship and art, craftsmanship and tenacity. Without countless hours of engineering, planning, and hands-on electrical work by Joe, and Duane’s willingness to attempt to convey the culture of a people on a technologically advanced canvas, the collaboration wouldn’t be the success that it is. The passion that both Duane and Joe put into this amazing project certainly inspired us here at MatterHackers, and it was an incredibly rewarding task to be able to write a story about some fantastic people from the author’s hometown. (Go ‘Jacks!)

If you want to see more of Duane’s art or contact him for a commission, or more information on his Pivot art exhibit or his Parallels Presentation, you can visit his Facebook page here:

For more information on the Museum of Northern Arizona, and the current “The Force is With Our People” exhibit, which runs until March of 2020, visit their website here: