The transition to Industry 4.0 has fostered numerous engineering and fabrication changes for manufacturers in Europe and North America. This has created a pathway for the introduction of desktop 3D printing technology into manufacturing operations. One example is Volkswagen’s Autoeuropa facility in Palmela, Portugal. Since 2014, Autoeuropa has ramped up the use of desktop 3D printers from Ultimaker which has saved Volkswagen over 150,000 euros during implementation.

The Autoeuropa assembly line employs 4000 employees to produce over 1000 vehicles per year. Desktop 3D printers have hit their stride in the production of assembly line tools, jigs, fixtures and gauges. The 3D printing of gauges and fixtures alone translates into a 91% cost reduction and a 95% time savings over legacy injection molding processes. From these metrics, the facility recovered the 3D printing equipment and material capital investment in two months. Volkswagen now expects the savings from the introduction and use of 3D printing to top 250,000 euros per annum. 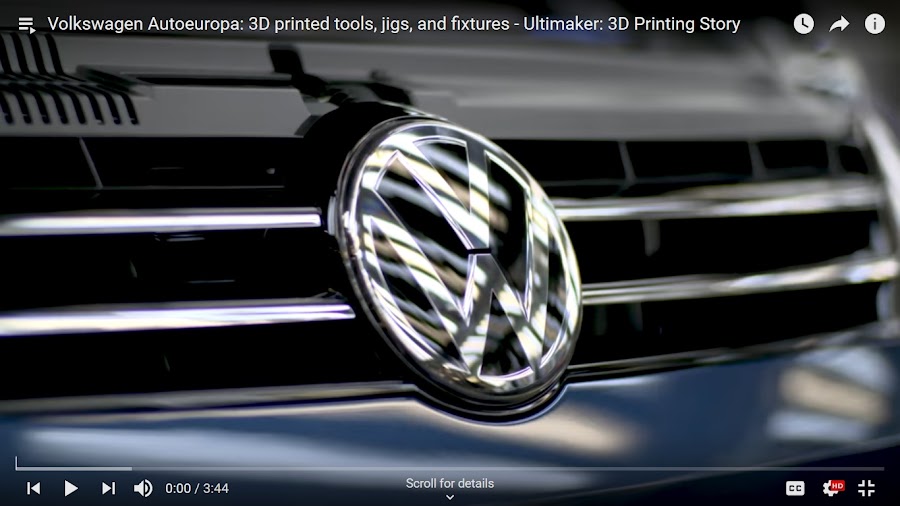 This low cost, quick return on investment solution produced over 1000 different parts used in the assembly of vehicles last year. The response from the assembly line workers has been favorable resulting in increased productivity and worker satisfaction. For process assembly, gauges were traditionally produced by suppliers external to the Autoeuropa operation. Now, thanks to Ultimaker 3D printers, a legacy gauge that costs 400 euros may now be produced internally for 10 euros. For a liftgate badge, a 35 day lead time for gauges was reduced to four days. For a wheel protection jig, the cost per part of 800 euros was reduced to 21 euros and the time to produce the part decreased from 56 days to 10 days.

The use of 3D printers has provided flexibility in the design and production of gauges. For gauge assemblies, only the worn components need to be replaced which prevents disposal of the entire part. Also, the time from initial idea / concept to end product decreased from over 14 days to 1.5 hours. The open material system of 3D printing allows for the optimal use of materials, decreases material waste and provides flexibility in testing of the end application. Finally, Ultimaker now provides the opportunity to network all 3D printers through Cura Connect. This provides the capability to audit the use of and throughput from 3D printers at the Autoeuropa facility.

Going forward, Volkswagen will continue to explore other opportunities where 3D printing and desktop fabrication may be leveraged to save additional cost and production time. This will herald a major step in transforming Volkswagen into a true Industry 4.0 operation.