I don't think there is anyone out there who doesn't think the words "awesome" or "rad" when they hear the words "combat robot." If there is, and that person happens to be reading this article, they should probably just move on to the next great MatterHackers article, because this section is all about Corey Nason's awesome and rad 3D printed battle bot!

Nason, a neurological and physical rehabilitation nurse from Boston, first saw 3D printing in the movie Small Soldiers, which featured an unrealistic version of an SLA printer that provided the basic concept of the process. In a more pragmatic setting, he really got the first taste in 2013 when he graduated from nursing school, where 3D printing was being used to make prosthetic prototypes for both arms and legs.

A few years later, Nason caught a bit of luck and actually won his first 3D printer, an Anet A8 kit, in a raffle at an engineering event that he attended. "This printer was great because it gave me the chance to construct a 3D printer from the ground up while gaining the knowledge and experience of how the components worked, what each component was and how everything was interconnected," said Nason. "Between my engineering background, attending a technical high school and an engineering college and also a love for tinkering, doing a DIY kit was perfect for me." 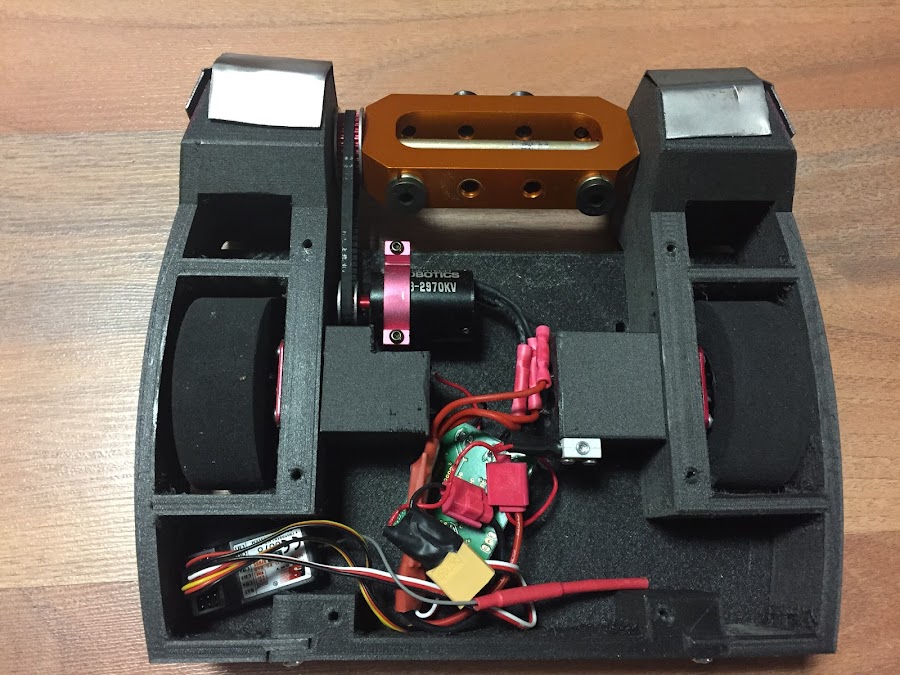 The underside of Nason's combat robot printed in NylonX

Nason acquired his second printer, an earlier Robo3D model, after winning a design contest. "I was so fascinated with the concept of transference of energy and optimizing the use of that power as kinetic energy. I submitted a design that would transfer the power of a spinning mechanism into a vertical throwing power," stated Nason, adding that, "this was just a theoretical idea, but in the end, the design was favored and I won the little contest. The printer came and it was a Robo3d R1+. This is by far my favorite printer, it takes anything I throw at it."

With a growing repertoire of 3D printers, Nason really caught the 3D bug, and his imagination was running like crazy: "After being introduced to affordable 3d printers and seeing what new ideas were taking place, the spark to create came back stronger than ever. I wanted to gain the knowledge of all the new technologies and processes of drafting, designing, and additive manufacturing."

Along with using 3D printers to create assistive devices to help all forms of disabilities, Nason has been using his printers to design and build combat robots. "One of the things I'm focusing on with my prints lately has been designing combat robots of the smaller caliber. Optimizing space occupation while maintaining optimal power put out and remaining within guidelines and regulations is what makes designing so fun. Utilizing the knowledge you have and expanding on the knowledge you could learn was what drove me to push the envelope for the combat robots."

After hacking his Robo to have a hardened steel nozzle and an enclosure, Nason was quickly becoming a master with some specialty materials like nylon and polycarbonate. His all-time favorite material, however, is NylonX: "NylonX is my go-to filament for all my prints that I need to use for high strength and durability while remaining as light weight as possible. In my honest opinion, if someone is looking for a filament that can produce maximum strength and keep its durability, I tell them that NylonX is my go to." 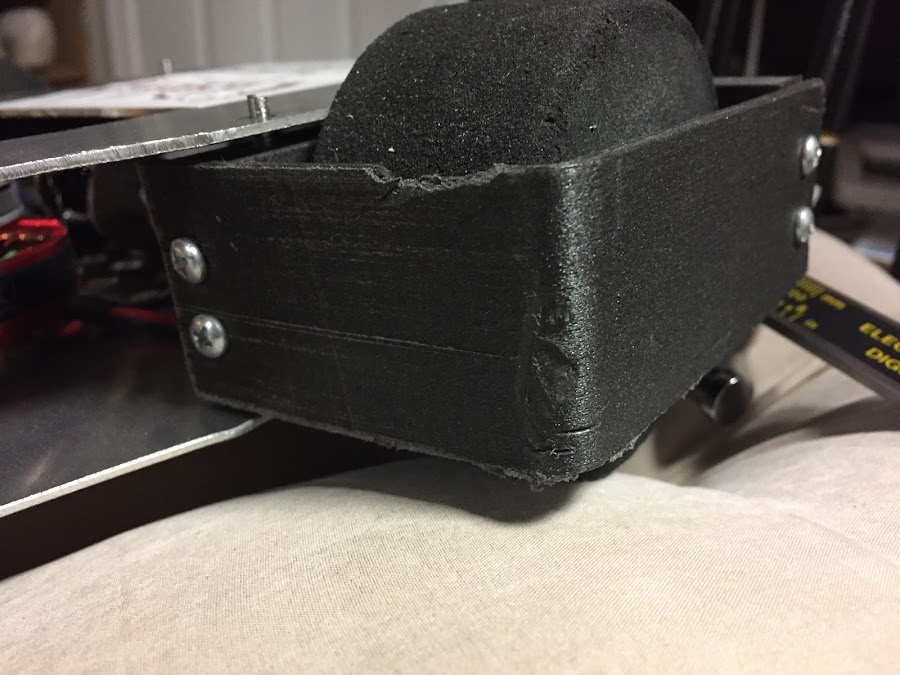 NylonX components stood up to the competition like a champ!

So, with his enhanced 3D printer and a sturdy material to work with, Nason started designing and building his combat robots. "The robot must stay within the weight limit of each class. 3d printing alone has greatly helped out because it allows you to model up your design and be able to physically hold your design and test fit without having to wait a couple days to a couple weeks for the part to be made. 3d printing allows you to have multiple iterations in a short time frame, as well as being not terribly wasteful with a non-fitting part. Adding NylonX to the mix was like having the golden ticket, still maintaining lightweight while adding strength and durability characteristics to plastic that are close to metal. Also, if you have a piece destroyed in combat, you can just go into the printer and send the same STL file and reproduce the part in a timely manner."

So far, Nason has made two combat robots using 3D printing. Here is Nason's description of his battling bots:

"My first robot is called mighty eagle. It is a 3lb horizontal bar spinner. The key feature on the robot is the weapon, a 1lb s7 tool steel 9" sharpened blade that spins around 8500 rpm. The weapon is controlled by the transmitter where I use one of the control sticks and raise the stick from a zero position all the way up towards the front of the controller, 100% of the power, where the blade will spin up quickly to max speed. The weapon is a very effective feature, catching and damaging the opponent to immobilization. The robot's setup is the weapon is placed towards the front of the robot and the 2.75" foam wheels in the rear pushing the weapon around. There are ball bearing casters that take the load off the front and make the movements a lot more fluid. My favorite part about this robot is how powerful the main weapon of the robot is. Aside from the top and bottom rails of the frame being made out of 7075 aluminum, the robot is made out of printed parts of NylonX. This was my first design and one of my favorite combat robots." 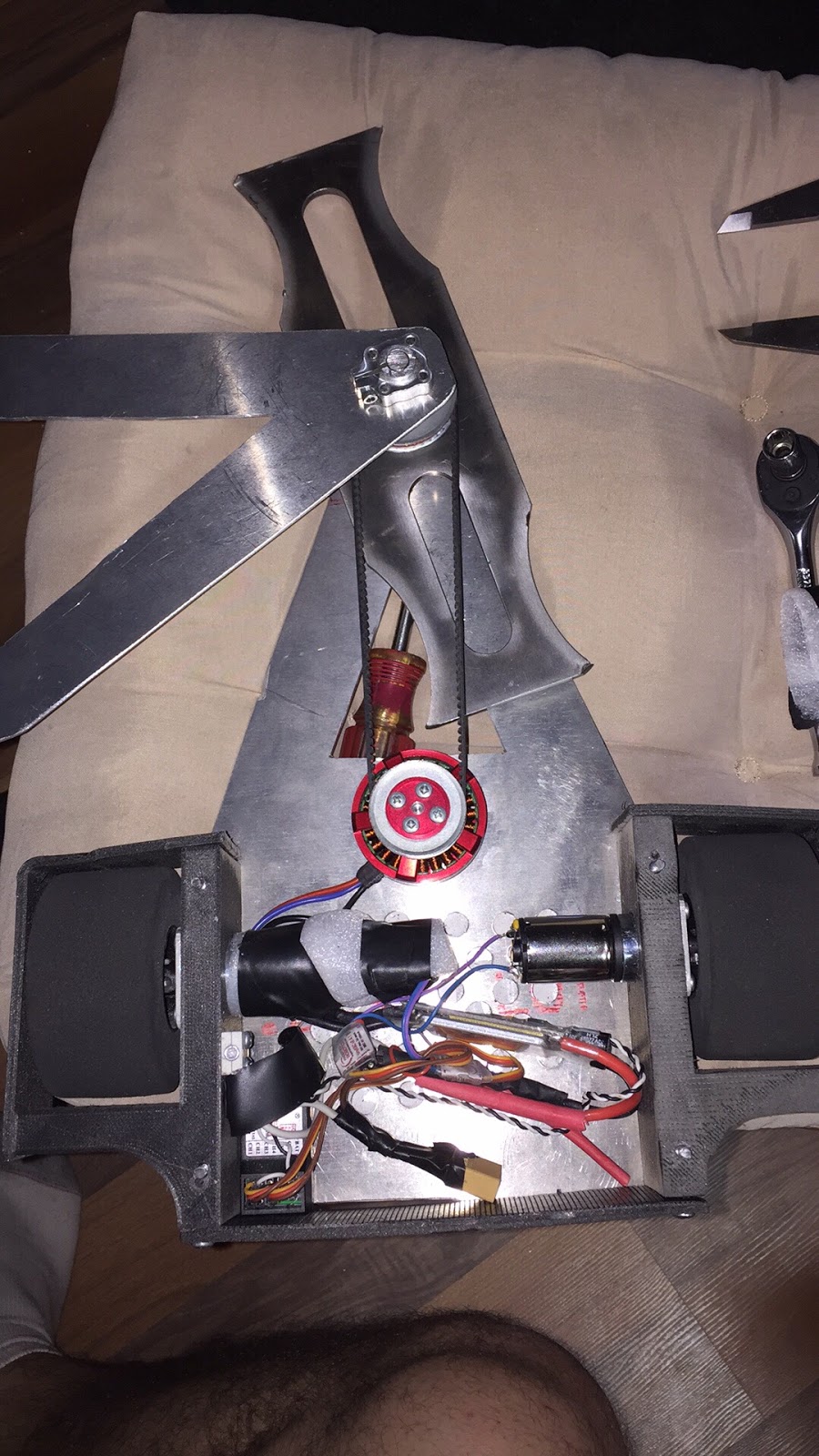 "My second combat robot is named electress. It is a 3lb egg beater/drum bot. The key feature of the robot is the weapon, a 1lb 6061 aluminum rectangular bar with sharpened steel teeth to inflict the most damage possible. The bar spins at around 15,000rpms and has a 1.25" reach. The weapon is controlled the same way as my bar spinner, a control stick raised from 0%-100% power. The weapon spins in an upward motion so when an opponent comes in contact with the bar, not only will it inflict damage to the robot but also give the opponent An upward flight transferring the energy from the bar to the opponent. The robot is controlled by 2 2.75" foam wheels centered on the chassis making the maneuverability superb. My favorite part about the robot is the chassis itself. Being made out of some kind of metal or other plastic, it would weigh too much and not be able to compete. This robot is made entirely out of NylonX material, aside from a titanium kick plate on the front, which keeps the weight down on the robot substantially. The shape of the robot is meant to help keep it always able to drive around as the design is able to drive upside down and the edges are rounded so it could roll onto its base. The NylonX is the material I based my designs on because the tested durability the material has and how your creativity is limitless." 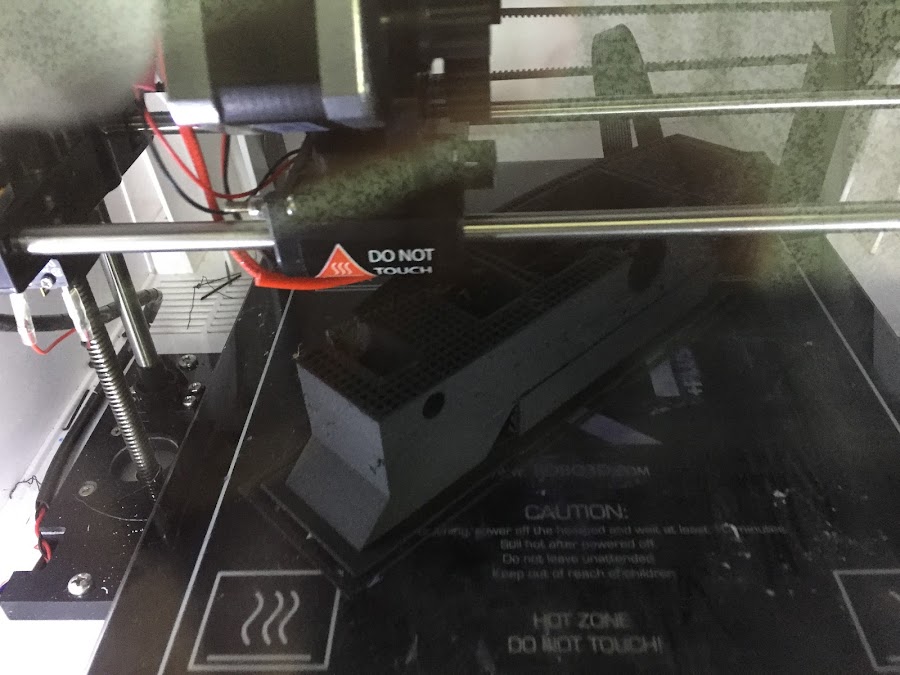 Printing NylonX on the Robo for part of Electress

3D Printing has made Nason's passion for combat robots possible, and it has even helped his daughter find something that she is passionate about as well: "My six-year-old daughter absolutely loves what 3d printers can do and she is learning all about them. The 3d printer brought out a side in my daughter that she never really showed prior.  She wants to start designing different toys and fixtures," said Nason, adding that, "she has also dived into Autodesk Fusion 360 and SketchUp to slowly learn the engineering and design process. Right now she is making all the different models she likes on Thingiverse and minifactory then later she will start to design her own creations and models."

It is always very rewarding for us to learn about how people are using 3D printers to enhance or customize their hobbies. In this case, Nason is able to do just that, and also share 3D printing with another generation of creators. Who knows what his daughter could invent next!