One of the many things that I like to emphasize when people ask me "what can you do with 3D printers" is that they can enhance your hobbies through customization. Mike Skrzypczak, our March Hacker of the Month, is the perfect example of how any interest can be tweaked due to 3D printing to match personal preferences. 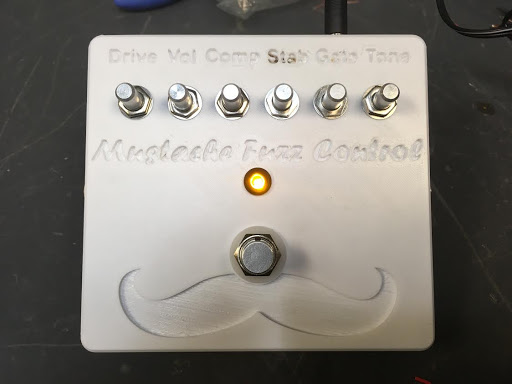 Skrzypczak is a mechanical engineer out of Illinois, and he's been 3D printing for about two years. "I got into 3D printing from work," he explained, "they had a broken down LulzBot and I fixed what needed to be repaired, then started printing tools and prototypes for the office."

While using the LulzBot and other FDM printers through work, Skrzypczak has since purchased a genuine Prusa MK2 to use for personal projects at home. He also started offering printing services through his business Additive Part Design.

One of the more recent personal projects that Skrzypczak worked on was a custom guitar pedal casing. "My inspiration to create the guitar pedal was out of being frugal," he joked. "I saw a pedal I wanted to purchase and it was $200. I thought it couldn't be that complicated of a device so I decided to build my own." With the spirit of a true maker, he set off to research what he needed to create his own 3D printed guitar pedal.

After finding the correct circuit design from DIY Guitar Pedals (the maker movement is everywhere - embrace it!), and a PCB to help make wiring and soldering easier, the total cost of the project was only about $60.

"My design process started with building the circuit," said Skrzypczak, adding that, "once I had an idea of what the size of all the potentiometers and input jacks were, I based my pedal side off of those dimensions and a standard off the shelf pedal enclosure." 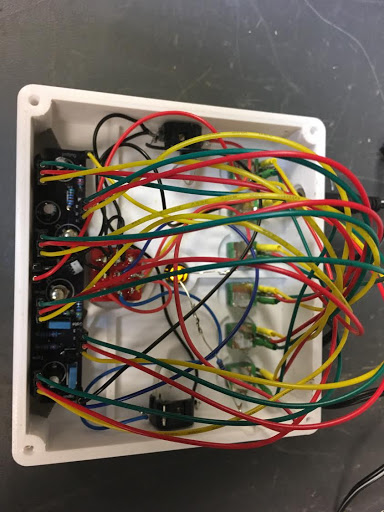 The PCB and wiring of the pedal

Skrzypczak decided to make the pedal about two times the width of a standard pedal, but at the same depth and height. "Because this enclosure was going to be stepped on," he started, "I made sure that all the pressure points were well supported, and it was made out of a suitable material."

He uses mainly ABS filament at work, PLA filament at home, but has also printed in many other 3D materials, such as polycarbonate, PETG, nylon, t-glase, and TPU - it all depends on the situation.

"I chose to use MatterHackers PETG filament and I included lots of support ribs to minimize the pedal flexing while in use," explained Skrzypczak. He explained further that another nice perk to having this part 3D printed was the ability to use thick walls and supports which could become problematic on an injection molded part. 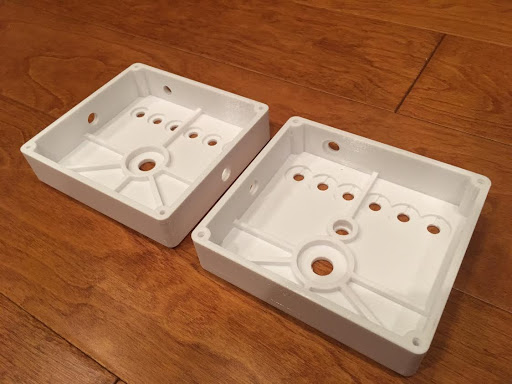 So, now that Skrzypczak had the dimensions of the pedal exactly how he wanted it, it was then time to customize it: "Once I was content with the structural design of the enclosure I wanted to make it my own with some sort of silly name. Since I was making a fuzz pedal, I went with Mustache Fuzz Control and modeled in a mustache where the switch is located where it looks like a nose. Very silly, but pretty tame compared to what else is on the market." 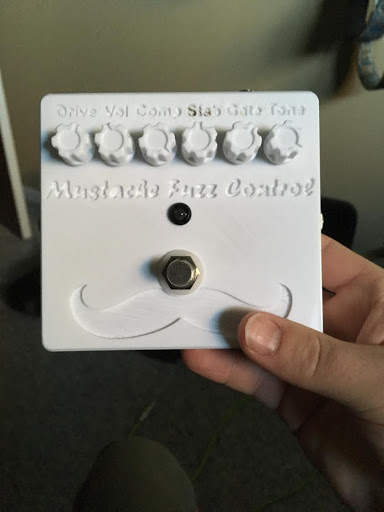 The pedal was assembled by hand, first by inserting the pots and input jacks, then soldering all the connections to the PCB board. The PCB board was secured to the enclosure with some double sided tape. Once everything was in the enclosure, the unit was closed by screwing a back plate on to the device.

"The pedal works great, and it has a lot of tonal options," said Skrzypczak. Here is a sample of him playing using the pedal:

For future prints, Skrzypczak will continue to make functional 3D prints for himself and other people. As for the future of 3D printing: "I see 3D printing becoming less of a hobbyist/engineering tool and more main stream. From the limited time I have been printing, the machines have gotten much better in terms of print quality and ease of use. I think the future will be a 3D printer that is as easy to operate as a normal ink and paper printer. This would be great as it would be nice to get this technology in the hands of those that are not as technically focused or engineers. By making the technology more approachable, I think people will come up with new exciting ways to utilize 3D printing."