Hacker of the Month for December 2018, Preston Tobery, co-created and 3D prints the MegaFeeder3000 to help kittens and puppies with congenital defects.
Mara Hitner
(EDIT)
Add a Comment | View Comments

At MatterHackers, we are constantly searching for inventive and unique ways that 3D printing is being used in the world, and we are always excited to find stories of those who use their talents and skills to help others. In this case, we were lucky enough to learn about Preston Tobery and Hannah Shaw, the minds behind the amazing MegaFeeder3000; a 3D printed feeding platform for cats and dogs that suffer from megaesophagus.

The invention of the MegaFeeder3000 came from a collaboration between this serendipitous duo; Preston Tobery, a Coordinator for Maker Technologies at the University of Maryland Libraries who has a huge passion for 3D printing; and Hannah Shaw aka Kitten Lady - a YouTube personality that educates viewers on cat adoption, especially special needs kittens.

Some of Hannah’s rescues are born with a condition known as Megaesophagus; a congenital defect which makes it tough for cats - and dogs - to eat out of regular bowls on the floor. Their esophagus doesn’t push the food down to the stomach like normal, so eating from a raised bowl sets the esophagus up at an optimal angle for food to pass smoothly through, and allows gravity to just do its thing and get the food where it needs to go.

Enter Preston - after watching a few of Hannah’s videos, he reached out to see if he could help 3D print something for Hannah’s kittens to make it easier for them to eat. To his shock, she replied with a sketch of an idea for a feeding bench, which Preston turned into the MegaFeeder3000! Preston uses primarily MatterHackers PRO Series filament when creating his MegaFeeder3000 units, and he's also considerate in his color choices - many orders get to select the color they want, making the orders even more specialized. 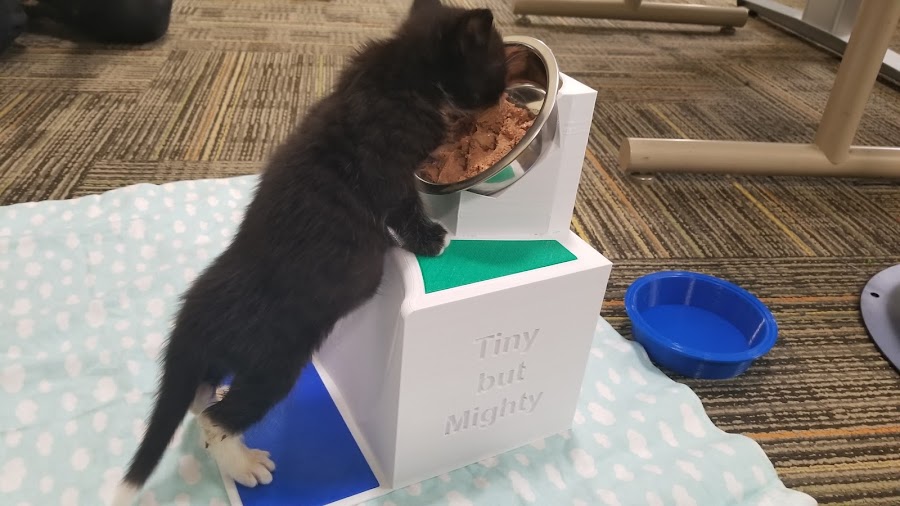 Rescue kitten Badger testing out a beta version of the MegaFeeder3000

It took two weeks of iterations, but once the final product was featured on Hannah’s YouTube channel and other social media, Preston started getting calls to create more. Working under his new company name, Adaptive Tech & Consulting, he is now producing 2-3 feeders per week and looking at other forms of fabrication to keep up with demand. He’s also working on a version for dogs, as Megaesophagus is an even more widespread problem in the canine community. Now MegaEsophagus kittens all over the world - on and off Instagram - are able to eat safely thanks to 3D printing, and Hannah and Preston!

Preston saw his first MakerBot Replicator 2 at Michigan State University’s makerspace years ago, and in his words, it was love at first sight.  When he started working in IT at the University Of Maryland Libraries, he convinced them to purchase a 3D printer. Because Preston is a hands-on learner his first 3D printer was a discovery-in-doing lesson; he completely took it apart and put it back together to learn how it all worked! 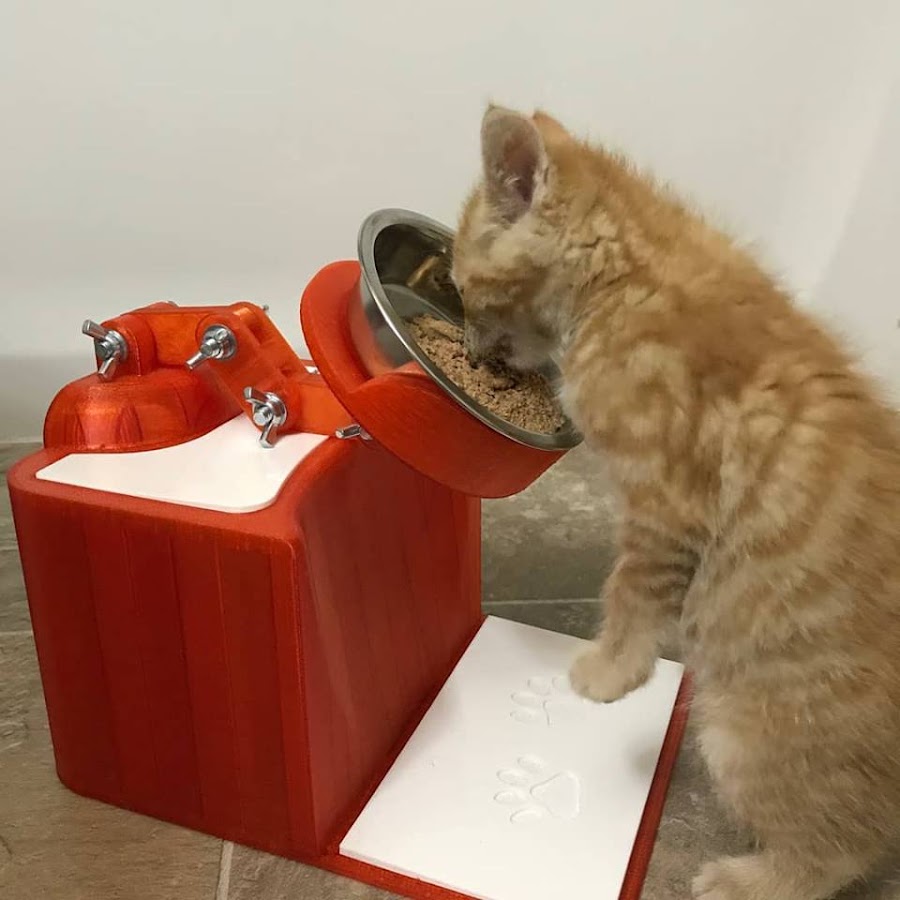 “What really struck me was the fact that this THING was just appearing before my eyes,” explains Tobery.  “It’s still fun to see people gather around and watch the printer go. I compare it to watching fire – it draws you in and you can’t stop staring at it.  Even the noises and crackling remind you of fire.”

The director saw his passion for new technology and they created the Maker Technology Coordinator position specifically for Preston so he could share his passion with students, staff, and faculty.  He now runs a 1000 square foot room full of 3D printers like a CR-10S, a Zortrax M200, a Zortrax M300, a SeeMeCNC Rostock, and a Peopoly Moai put together as a kit. His lab also contains an awesome variety of other Maker tools like a Mosaic pallette, vinyl cutters, scanners, AR/VR units, arduinos, robots, and more.

In addition, Preston has designed and fabricated assistive walking devices and wheelchairs for some kittens and cats as well! 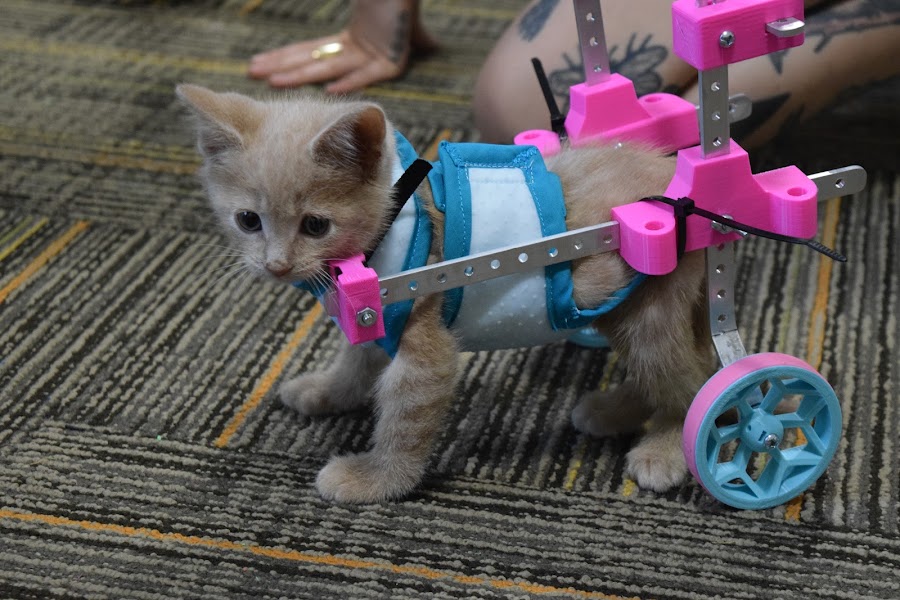 Kitten Chloe getting some wheels!

With the popularity of the MegaFeeder3000, Preston’s business is growing rapidly, and he’ll be getting more large-format 3D printers to keep up with demand for his feeders, as well as other 3D printing and consulting projects for some pretty big companies. His goal in life is to help animals, and because 3D printing is simple enough to do in your own home or office with a sketch, some PLA, and a 3D printer which only costs a few hundred dollars, anyone can now develop themselves as a specialized entrepreneur putting good into the world by helping kittens!

What does Preston have planned for the future? While he is a huge cat lover, he does have an open mind when it comes to helping out other beasts, “I’d love to work with zoos to come up with designs for adaptive technologies for exotic animals,” Preston says. Lions and tigers and bears! We can’t wait to see THAT on Instagram.

If you would like to see Preston and his work with the MegaFeeder3000, visit his Facebook page here:

You can also visit his brand new webpage here:

To check out Hannah Shaw aka Kitten Lady, you can see her YouTube channel here:

Want to be our next Hacker of the Month? Email chris.morgan@matterhackers.com, and tell us about your 3D printed creations - you could be featured in our next newsletter. Hacker of the Month receives 3 free spools of PRO Series or MH Build filament to further their pursuit of 3D printing greatness!