For anyone that follows our Instagram page (@matterhackers in case you’re not!), you’ll recognize the work of Kenny Nevor. His custom-designed brackets fabricated with NylonX and NylonG are a welcome addition to our IG Stories page on an almost daily basis. 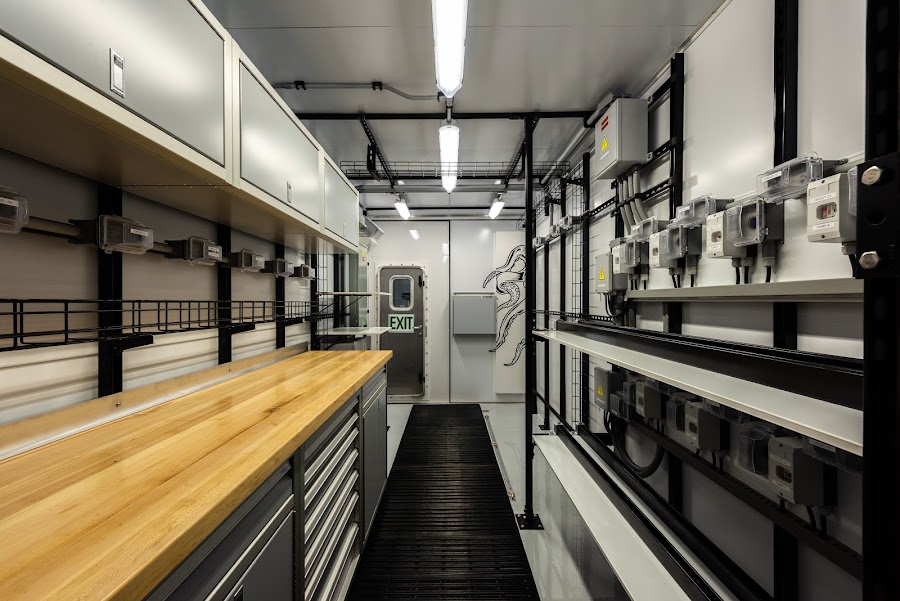 Kenny Nevor began his path to 3D printing on an atypical trajectory when he moved to Rhode Island from New York in his 20’s to pursue a career as a professional yacht racer. He currently works as an independent consultant and divides his time between working on designing functional parts for his own camera and video hardware projects. He also currently designing and fabricating custom brackets and supports for a unique laboratory build in a shipping container for the University of Rhode Island that will be deployed on ocean-going research vessels.

While he started in the yacht racing world, Kenny has learned many skills on the way to his current work. “Most of my life has been spent racing sailboats, but I have a very diverse skill set, as I like being involved in projects where I have several roles; I am not particularly good at just doing one task. I stopped racing a while back and was involved in a startup in the Oil and Gas industry utilizing ROV’s for subsea inspection. After that, I worked on a research vessel.”

“Currently I am involved in several shipping container workshops and laboratory builds, and some work in high-end marine electronics. I do consult and contract work in several fields, and all these projects utilize 3D printed parts. I have also been a photographer for most of my life and my photo/video work is typically integrated into most of the projects I am involved with. I also have my own micro production company, specializing in industrial, marine, and nature videography and photography.”

His education, which was primarily focused on art with an emphasis on science and technology, helped give him the experience he needed for the design to create unique brackets, jigs, and fixtures for a variety of projects.  “Most of the current parts I’m designing are for the electrical installation and end caps for exposed ends on steel unistrut inside the shipping container laboratory. Another recent project I had to replace the buttons on a foiling sailboat, that control hydraulic actuators. They were exposed to saltwater and the electrical connections would always corrode and fail. I quickly designed a two-piece part that would mount and seal the button. Then I was able to fully encapsulate the solder connections with potted epoxy.” 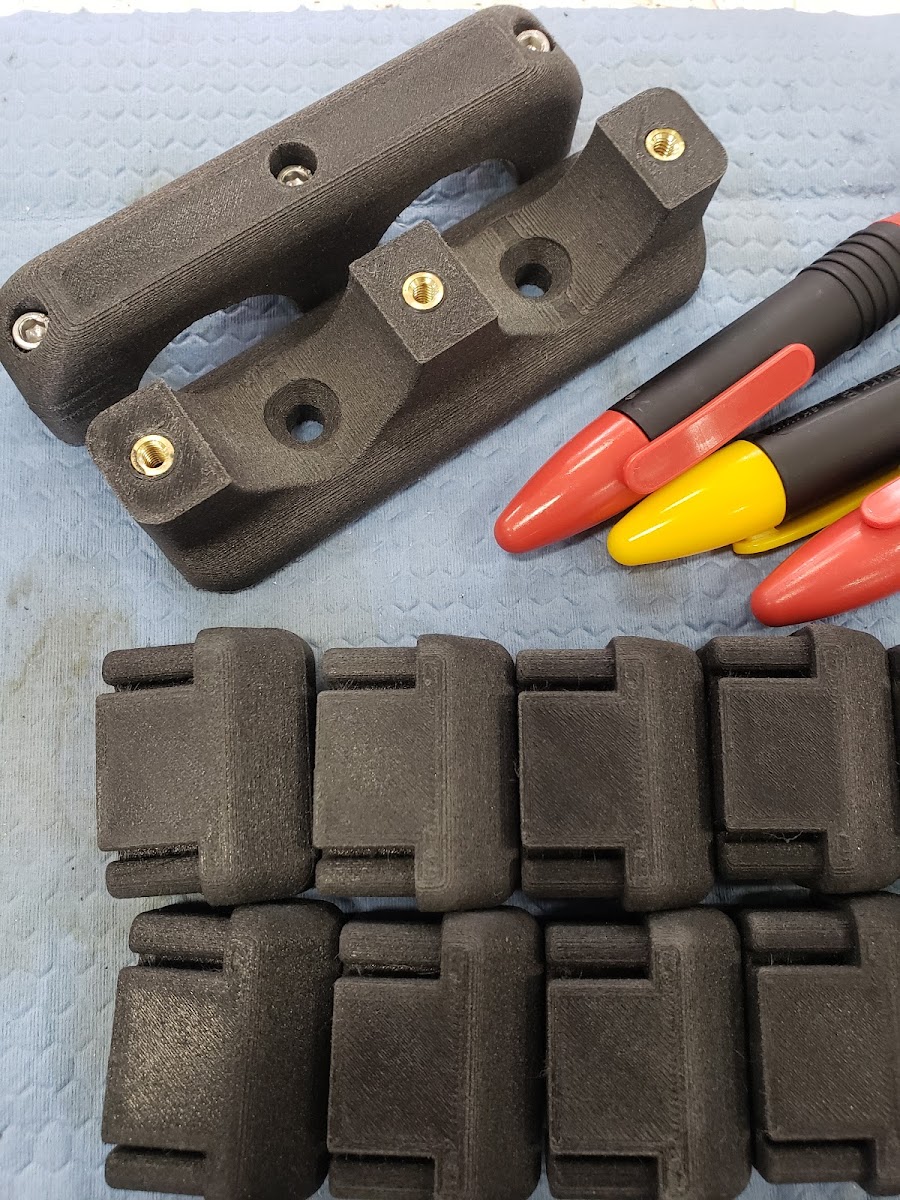 This early experience with personal design led Kenny to develop custom fittings for not only boats, but for his camera equipment, and the large task of creating multiple, unique fittings for the laboratory project. “I have been lucky with this project that we have had a long timeline, which has allowed me to develop several pieces for functional installation.”

“With the laboratory container build, we have the flexibility of time to really create some fine details. I was able to design and prototype parts, and even do a few revisions. The result is an exceptionally clean design and integration with existing parts. I do not have any metrics, but I am continually seeing time and cost savings in pieces that would have to be fabricated out of aluminum, g10, or traditional composite lamination.”

A junction bracket designed and 3D printed for this specific configuration.

Kenny currently uses a Creality CR-10S with a Micro-Swiss All-Metal hotend and a direct-drive, as well as a heated build chamber. “Next mods are Mosquito Hotend with direct drive, an AC Heated bed, and various linear drive component upgrades. I am replacing all the items that are going to fail with the addition of a heated enclosure. I will also be building a Duet3d board at the same time. I still do not know what direction I am going in the future by purchasing a new machine or machines. I would really like to get into high-temperature printing, I just do not have the need yet. I am currently looking at being able to print higher-end carbon-fiber nylons, along with polycarbonate, and possibly polypropylene filament.”

“Even constantly changing the print settings and making hardware changes large and small, I still see a lot of fine-tuning to be made in my prints. Along with designing parts for additives, several of my first parts were built as they were going to be manufactured by traditional machining. Luckily, I figured this out pretty quickly and was able to start thinking about additives in advance.”

Kenny initially began printing with PRO Series PLA, and then quickly moved to PRO Series PETG. “I found PETG easy to print and it was printing very accurately for me. I really like PETG for prototyping and for some lighter use parts. I have an adjustable mount for my laser level made from CF-PETG from 3DXtech. I make most of my marine grade parts out of 3DMAX ASA at the moment along with a few truck parts in development. Right now most of my production prints are in NylonX and NylonG.” Kenny primarily uses Prusa Slicer and Simplify3D for his slicing software, and Fusion360 for design work.

A major advantage of Kenny’s design work in 3D printing is the portability; all of the previous, current, and future projects on the horizon all utilize 3D printing in some way. “I have used many different technologies and manufacturing processes throughout my career to build parts. The parts I have 3D printed for several projects this year would in the past involve a lot more labor being made out of fiberglass or carbon fiber, and/or aluminum and steel. Now I can just design a part, print a prototype, confirm dimensions and make revisions and then print the production part. This is much faster for me and cheaper for the client.”

An interactive 360 degree view inside the Shipping Container Laboratory for University of Rhode Island.

While Kenny is always moving forward with upgrades and new hardware on his own machines, he sees room for improvement on a few other levels in the 3D printing industry. “A five-axis machine would be fantastic. I really like what E3D is doing with their tool changer designs, I think the ability to have multiple tools on one machine is a game-changer. Having subtractive tooling in the same package opens up even more possibilities. I recently watched some videos of the Arevo, a 3D printed bike frame. I really like what they are doing where they are integrating fixtures in the printing process to allow more complex shapes to be printed. I would also really like to see more 3D printing and digital fabrication in early childhood education. Higher quality printers at a lower cost would help as well.”

We are excited to see the result of Kenny’s custom brackets and the finished Laboratory Shipping Container for the University of Rhode Island. In the meantime, you can catch Kenny’s designs and progress on his Instagram page here:

Of course, we will continue to share all of Kenny’s awesome IG Stories on our own page as well!