Using Synergistic Skills and Materials to Innovate and Create

A trained metalsmith who was the first female contestant on Forged in Fire is using metal, 3D printing, and more to create one-of-a-kind pieces of art.
Chris Morgan
(EDIT)
Add a Comment | View Comments

Multimedia making is the name of the game for August’s Hacker of the Month. Kim Stahl has been building and applying her skills in crafting since childhood, growing up on her family farm in Southern Indiana, where her father taught her how to use hand tools like a hand-held planer. Feeling curious and creative, and inspired by the movie, The Natural, she began to carve a bat. She also fed her curiosity by taking apart old phones and radios to investigate what made them work. This curiosity and creativity continued with her into college years later as she graduated from Indiana University, Bloomington, Indiana with a BFA in Jewelry Design and Metalsmithing in 2003 and a minor in Art History. 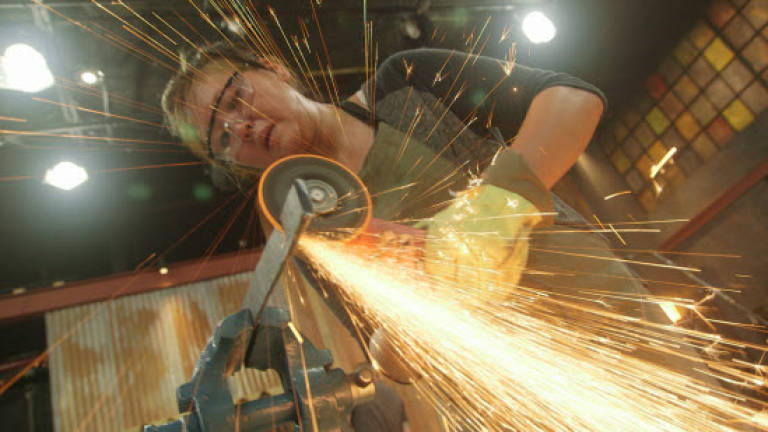 Kim Throwing Sparks on Episode One, Season Two of Forged in Fire

After graduating, she moved to New York City with that same curiosity and was able to adapt and find ways to be creative and artistic in the city.  “I had a very limited amount of tools - I made a desk out of moving boxes - but continued to challenge myself to design jewelry with the bare minimum. I had just graduated with my BFA and at the time planned to go back for my MFA, and I just felt so inspired by everything in the city. I was so in love with working in metals and trying to make as much as I could that I tried to find work that suited a jeweler but only found part-time work in jewelry sales at Vass Ludacer in the West Village.” 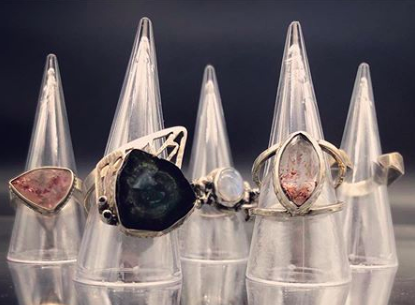 Some of Kim's jewelry creations

“I was able to briefly pursue a jewelry job with a small manufacturing company and worked with Gwen Stefani on her L.A.M.B. line (Love Angel Music Baby). I also had the opportunity to work with Christo and Jeanne-Claude on The Gates installation in Central Park, and I was the team leader of a group that installed 138 gates on the East side of the park.  I annually assisted a Contemporary Jewelry Gallery owner by the name of Charon Kransen at SOFA NY (Sculptural Objects Functional Art Expo) while I continued to make and design jewelry in my bedroom. In 2006 I was asked by a friend of mine to teach a class on wax working and casting of jewelry to her fellow high school art teachers from Connecticut.  It was an extremely successful wax working/casting jewelry class of 5 that met on a few weekends and produced some incredible pieces.”

In 2007 Kim started taking introductory courses in Blacksmithing through the School of Visual Arts in New York City that was held at the She-Weld Blacksmith Studio in Red Hook, Brooklyn. She studied under Artist/Blacksmith Marsha Trattner. There, Kim found a new passion for creating with metal in a forging medium and apprenticed under Marsha for the next five years. 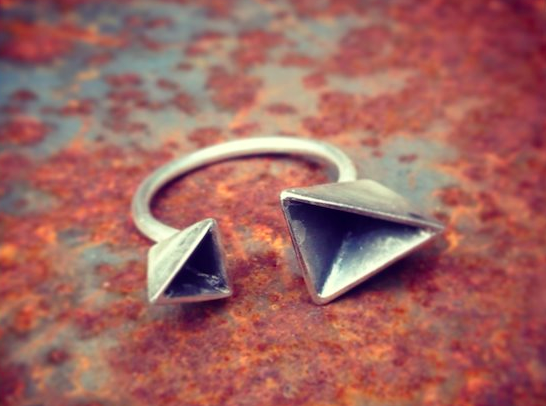 Another ring created by Kim

During this period she lived in a shared artist space affectionately called ‘The Fort’. where there were several artists, sculptors, another jeweler, leatherworker, printmaker, industrial designers, and even a luthier (an artist that crafts guitars).  "It was definitely before the term "makerspace" but that's exactly what it was." Two apartments upstairs shared communal living areas and all the artists shared the workspaces in the pursuit of practicing and living their art.

“That was a pretty awesome time. There was always something going on, and the creativity that I arrived with was deeply changed by living there - it really took my abilities to a whole new level being able to share that space with so many other artists and creative minds.” 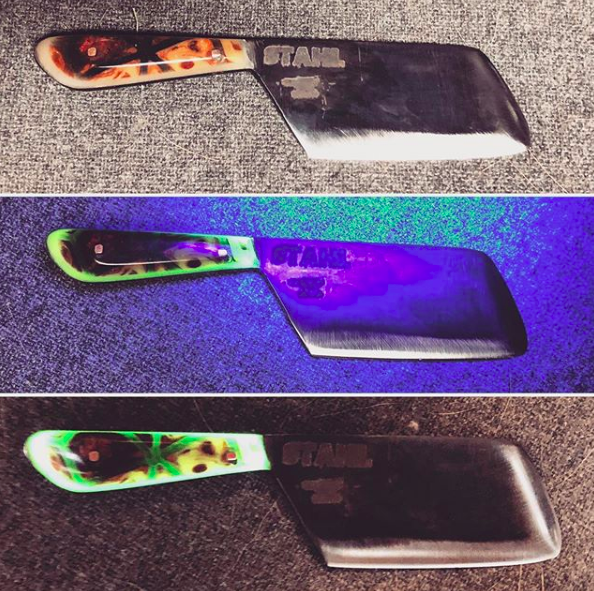 Unfortunately, in 2012, Hurricane Sandy devastated Red Hook, and the She-Weld studio was ruined by high floodwaters. Gratefully, they have since reopened in a new building a mere four blocks from their old location.

In 2014, Kim moved to St. Louis, Missouri where she currently lives and began working for a local knifemaker.  Later that year, she received a call from the History Channel to appear as a contestant on Forged in Fire - a competitive reality show where four contestants are given a blacksmithing challenge to create a hand-held metal weapon from scratch.  Not having much experience with knifemaking under her belt yet, she refreshed her blacksmithing skills and studied up. Soon, she let her curiosity take over once again, and she was the First Female Contestant ever on Forged in Fire Season Two, Episode One, Warhammer. 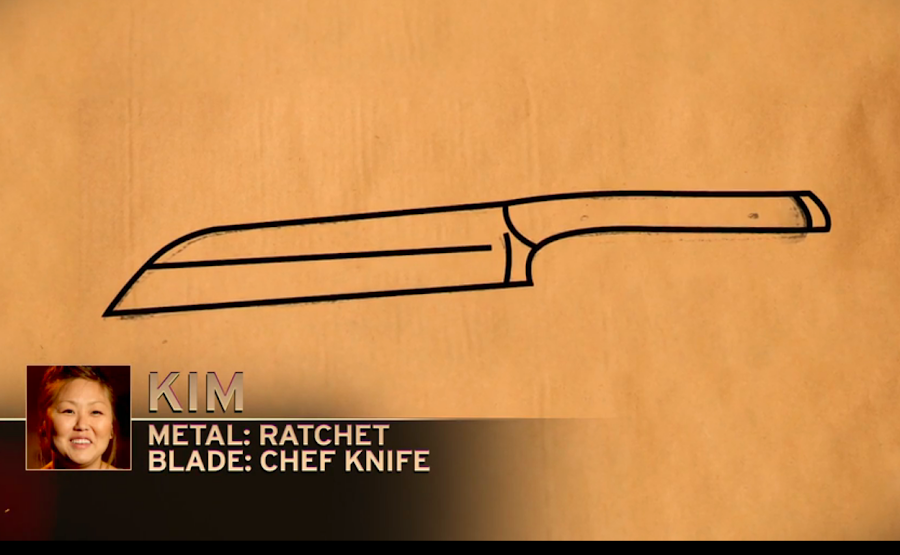 Over the next few years, Kim decided to become a bladesmith, honing her skills every day. She continues to make custom jewelry, as well as practice blacksmithing, and bladesmithing. This helped Kim become more well-known in the crafting and Maker community, and she began to get involved even more in the St. Louis area as an artist and creator.

A men's ring designed and forged by Kim

To bring more attention to the ever-growing Maker Movement, and to work more on her own art and creative processes, Kim joined her local makerspace 2 years ago and has served as the Board of Directors Secretary and currently is the acting Public Relations Director.   Arch Reactor Hackerspace/Makerspace, one of the largest in the US, is St. Louis’ first makerspace which has been open to the community for over eleven years.  There is a massive shared space of 5000 square feet, which includes the ‘reaction chamber’ containing a shop full of equipment, a lab to work on projects, a classroom, and a lounge where members learn, collaborate and bring ideas to life. Members volunteer and collaborate to keep everything running, and the Maker community is always working to improve the space. 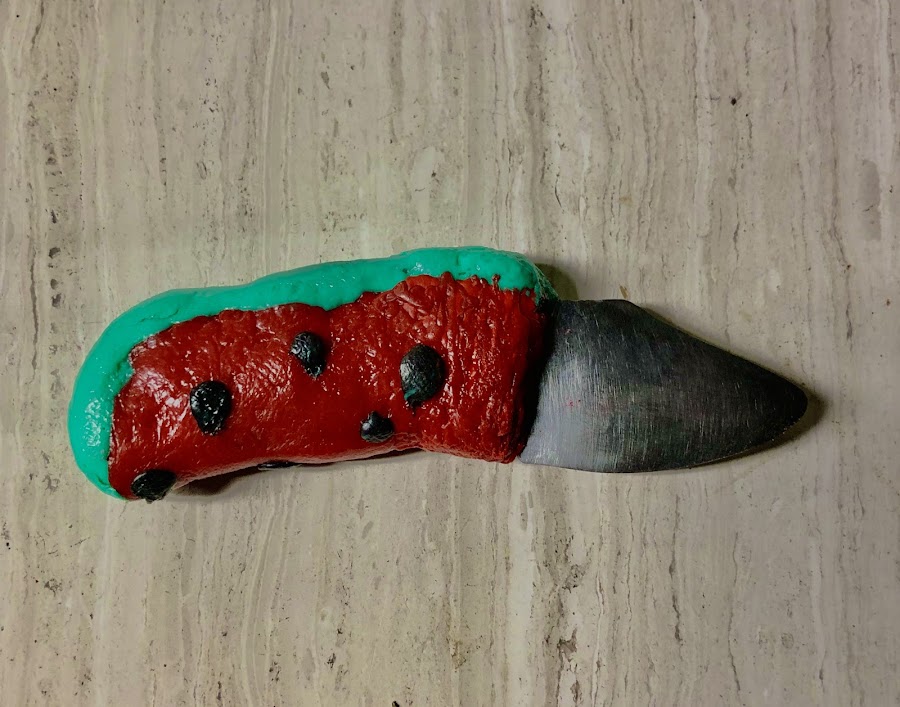 Now, Kim has stepped into the realm of 3D printing with handheld 3D printing pens. She has used the 3D pen for fabricating jewelry, accessories, and even handles for her knives with this versatile tool.

“When I use the 3D Pen it gives me total freedom to design and control what I get from the pen in terms of color, flow, and application. It’s been great for ‘sketching’ ideas as well. I can make a smaller version of something I want to see on a larger scale and then work from there - it’s awesome.”

It’s easy to see the culmination of the many influences of art and methodology on Kim’s artwork. We are extremely excited to see what the future holds for Kim, especially with her new adventures in using 3D printing pens in her jewelry and blacksmithing creations!

To learn more about Arch Reactor, follow this link: