Our August 2019 Hacker of the Month, Chuck Taggart, resides in Southlake, Texas. Chuck began his professional career as a civil engineer, planning, designing and overseeing construction and maintenance of building structures and infrastructure, but moved into insurance about 15 years ago. He currently owns a large health insurance agency, Health Reform Team, based in Grapevine, Texas.

Chuck began his journey into 3D printing after seeing a news segment on 3D printers about five years ago. Soon after, he decided to take the plunge and purchase his first 3D printer, a Zortrax M200. He also decided to get his children involved in 3D printing by having them design projects on their iPads, which he then printed out for them so they could increase their creativity beyond virtual designs.

The filter cleaner Chuck designed and is currently applying for a patent.

Soon after getting started, Chuck realized his designs were a bit bigger than the Zortrax could handle, so he decided to upsize to a Modix 120X for truly huge 3D printing capabilities.

Starting with the Zortrax, Chuck primarily printed with ABS and used alcohol wiping and sanding to get a smoother finish if he needed it. But once he moved up to the Modix, he was able to really start printing with PETG and carbon-fiber infused NylonX. Chuck has used Autodesk123D Design for quite some time, as he likes the convenience of taking his designs on the road and working on them on flights and in his (limited) spare time.

“I also created a neat contraption that will start my Green Egg charcoal smoker remotely from anywhere in the world, so that if I am on my way home and want to start my Green Egg, I can do it from my iPhone.” You can see a short video explanation of the starter box here: https://youtu.be/60zBdc9jnks 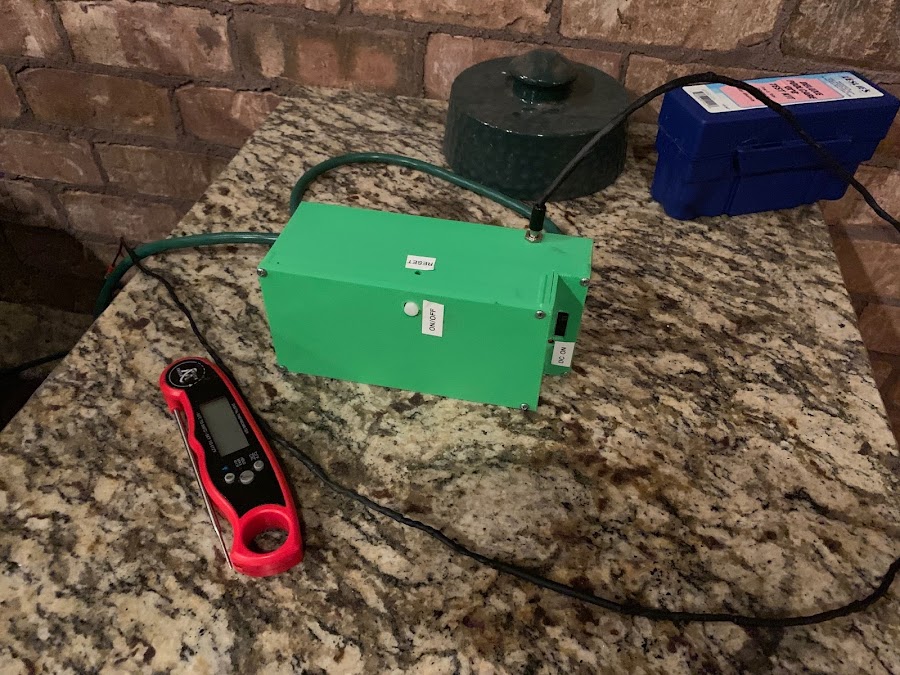 But what is the motivation behind Chuck’s 3D printing? “I just have a head full of ideas and I like to tinker. If I need something to make my life easier, then I think about if I can 3D print it if it does not exist. Or if I need a part that I could just make or that no longer exists it is cool to just make one.”

The main focus of Chuck’s designs center on new creations and recreating parts that no longer exist. “For example, I created and have filed for a patent on a system that cleans pool cartridge filters in a couple of minutes versus the standard way of hand spraying them.”

“ Also, last year the father of a friend of mine that is into ’57 Ford Thunderbirds came to me about a part for a supercharger (a cam ramp) that he says you can’t get anymore. The original stock part was made out of a type of plastic and was not very big, but it was pretty complex. It took a bit of time, but I was able to make this part for him, and then had to make a bunch more for his friends. Now they have all the parts they need.” 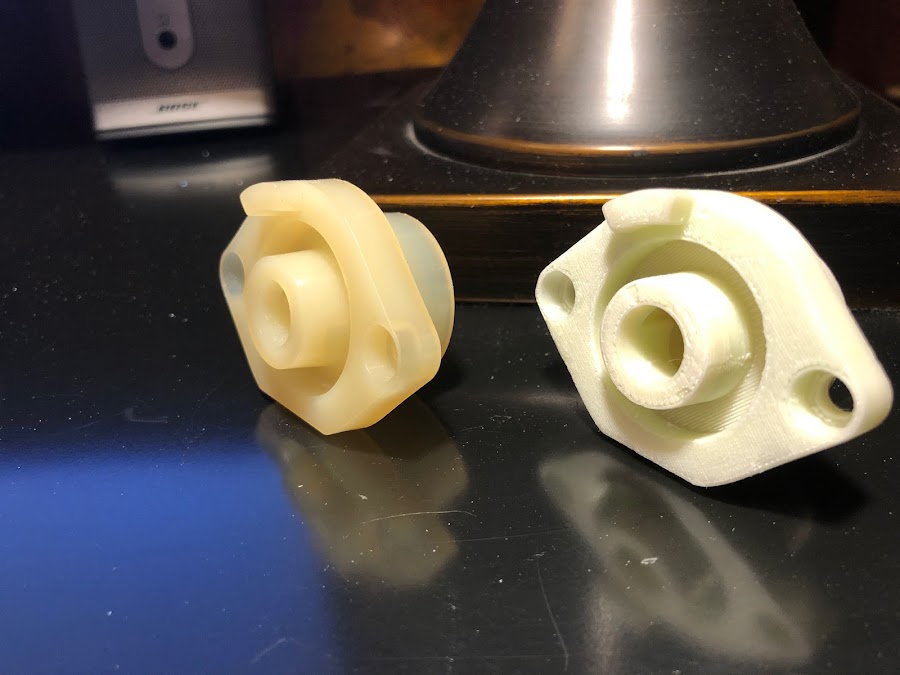 The Cam Ramp for the '57 Ford Thunderbird Chuck designed and 3D printed.

But the most glamorous of all of Chuck’s projects are made from scratch - lower fairings for his 2018 CVO Road Glide Harley Davidson that simply didn’t exist before he came up with the idea to create them.  “These actually help protect me while riding across the country on a motorcycle by keeping rain and rocks off my feet and lower legs.”

Utilizing the Modix 120X, Chuck was able to complete the fairings in one shot using NylonX without having to compromise the integrity of the print by combining smaller parts with glue or screws. (Excluding the clamp assembly to attach it to the frame of course.) The design also incorporates Rockford Fosgate speakers, and they have an amazing finish that makes them look like they came with the bike. The project took over four months to complete, from concept to printing, to finish. 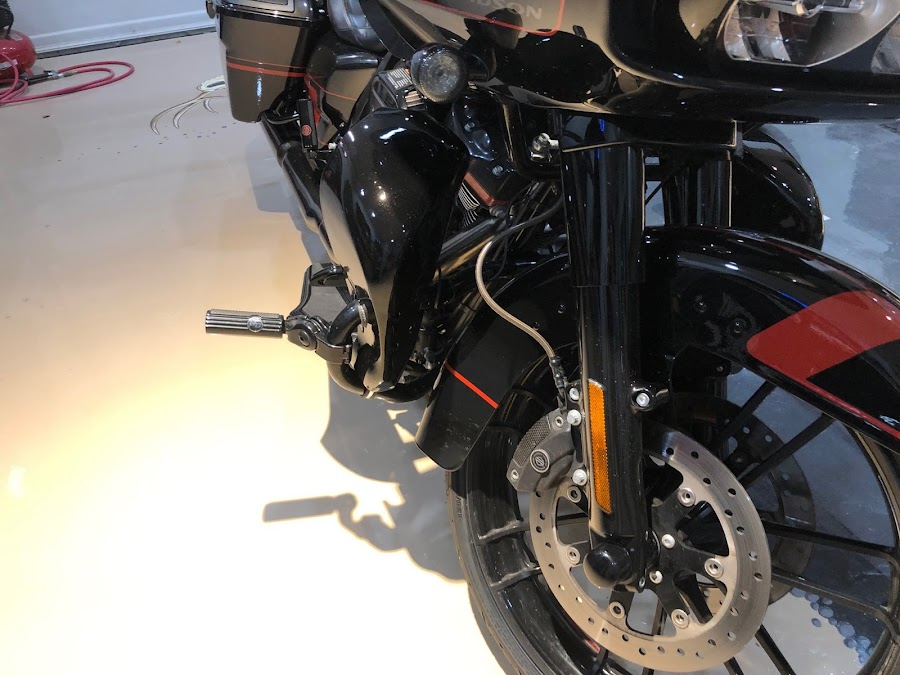 But what is Chuck looking forward to with the future of 3D printing? “I am sure the most common thing people would answer with is speed, but there are a few things I would love. First off would be a significant decrease in cost for real metal printing. I have been following this very closely so when the cost gets down enough, I am ready for a metal printer. Second, would be custom coloring in real-time. For example, just like a color printer runs off of maybe 6 color ink cartridges, it would be great to see a 3D printer do this too.”

Chuck has also done a bike build from scratch - the Daryl Dixon bike from The Walking Dead, which you can see videos of on his YouTube channel here: https://www.youtube.com/user/CLTaggart/videos 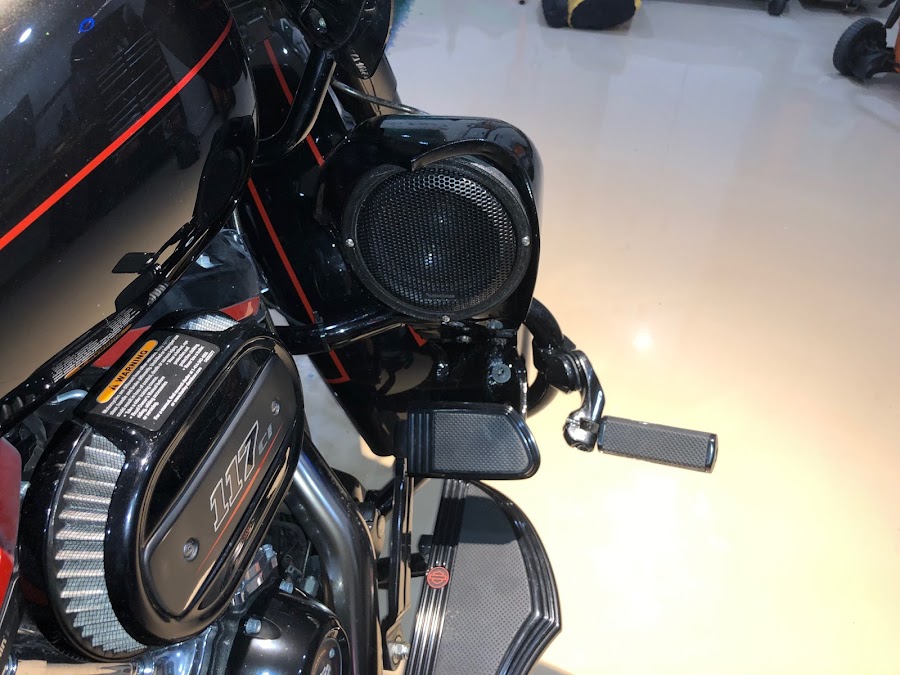 Chuck’s next project is taking big to the next level; “I’m looking to 3D print a convertible top for my Jeep Brute out of (probably) NylonX. I have it planned out and I am in the design stage right now.” We cannot wait to see the finished project! If it looks anything like his Harley Davidson fairings, Chuck may have to quit the insurance business and start going into custom fabrication. We will be sure to share more pictures of Chuck’s progress with all his upcoming projects as soon as there are updates!

Are you a 3D printing Hacker or know someone that is? We would love to share their story with the 3D printing community! Please email chris.morgan@matterhackers.com with information, and you or your friend could be our featured Hacker of the Month.