3D Printing 101: How to Succeed with a Perfect First Layer for Every 3D Print

The first layer of your 3D print is the foundation of everything that comes after, which makes it such an important part of the 3D printing process.

At MatterHackers we want to equip you with the knowledge and confidence to succeed with each and every print. To start - let’s discuss the initial layer that is printed for any part - we refer to it as, not surprisingly, the “First Layer.” Let's dive into the details.

The first layer of any 3D print is the foundation all subsequent layers are built on, which makes it important - it is also critical to remember that bed surface and material compatibility play a role in the outcome of the first layer. There isn't a universal bed surface material that every 3D printing filament will work with; some can handle most filaments, but others are targeted for the success of specific filaments. Take a look at our articles about how to succeed with any 3D printing material to gain the knowledge you need for the 3D printing filament you are struggling with and see a deep dive of the bed surface materials that are compatible.

Once you know that the bed surface material and printing material will work together, you are ready to clean and prepare the bed for maximum adhesion. Generally, a little rub down of the highest strength isoproyl alcohol (99% is best) will help remove any old residue or oils left by your fingers that would hinder the ability of the freshly laid filament from sticking to the bed. Some bed surfaces can get more extreme and require you to scuff it with sandpaper or more lightly with steel wool. Be sure to follow the recommendations for each material because you wouldn't want to use sandpaper on a glass bed, but it is recommended to use 220 grit on a LayerLock Garolite bed.

Depending on the surface, you may even need to use an adhesive as well in order to get the 3D print to stick. Printing PETG and its derivatives on LayerLock Powder-coated PEI doesn't require any adhesive, but printing PLA will necessitate a thin layer of PVA glue stick to keep everything locked down. Don't apply the adhesive too thick! On any surface you want just enough to keep your 3D prints in place and not so much that it adds considerable thickness or that it's nearly impossible to remove a 3D print, completed or otherwise.

What is a Z-Offset?

In the far off year of 2016, 3D printers didn't really use Z-offsets. The print job was started, the printer was homed (send to the minimum or maximum of each axis), and then got to printing the supplied gcode. Overall the 3D printing user experience, along with the technology, has made major improvements. Now, when you start your 3D print, you will often have the ability to "baby-step" the first layer, that is "adjust the first layer, during a running print job, to bring the nozzle as close or as far from the bed as necessary."

Originally, when your 3D printer would "home" it would move to Z0, the theoretical height that the printer's bed is at. You would then adjust the bed (usually with wingnuts or thumbscrews below each of the four corners) to raise or lower the bed so it is uniformly the same distance from the nozzle everywhere across the build plate. After that if you started your print and it was too far or even too close, you would have to adjust each of those screws to bring your bed into alignment. If you got good at it you could adjust it while the printer is busy printing the skirt, but often it meant canceling the print, making adjustments, and trying again.

Now, with Z-offset functionalities like baby-stepping you are essentially telling the 3D printer to add "0.05mm" to where it thinks Z0, instantly adjusting the print head to bring it closer or further from the print bed for a better first layer.

What Makes a Perfect First Layer

Now that you have an understanding about how you can affect your first layer it's time to take a look at what makes it perfect. We’ve compiled some examples of a small square at various Z offsets to show you the right way to adjust your printer settings to achieve a perfect first layer for your parts every time.

The perfect Z-offset will have a first layer with a top surface that looks like the top surface of a finished 3D print; neatly laid out extrusions that overlap each other without pushing up previous extrusions or bunching up at the edges. Underneath, its bottom surface has a clean and uniform pattern. If you were to print a cube with this setting, you wouldn’t see any flare out or tapered in at the base from the Z-offset being too far or too close, respectively. 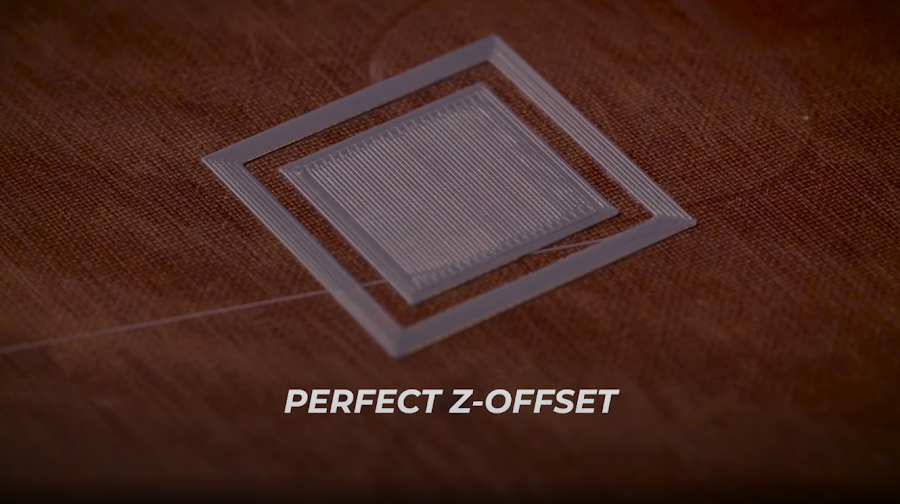 A calibration 3D print with the Z-Offset set perfectly.

Below, you can see the “0.1mm too close” print has ripples along the top where each pass of solid infill slightly pushes up the previous pass of solid infill. On the bottom, it is clean and smooth but has a cell-like pattern to it. While it looks fine, this will cause the bottom face of the 3D print to flare out, which means if it needs to fit in another part it will need to be trimmed back in order to fit, and the ripples from above can eventually catch on the nozzle and peel up the entire first layer. 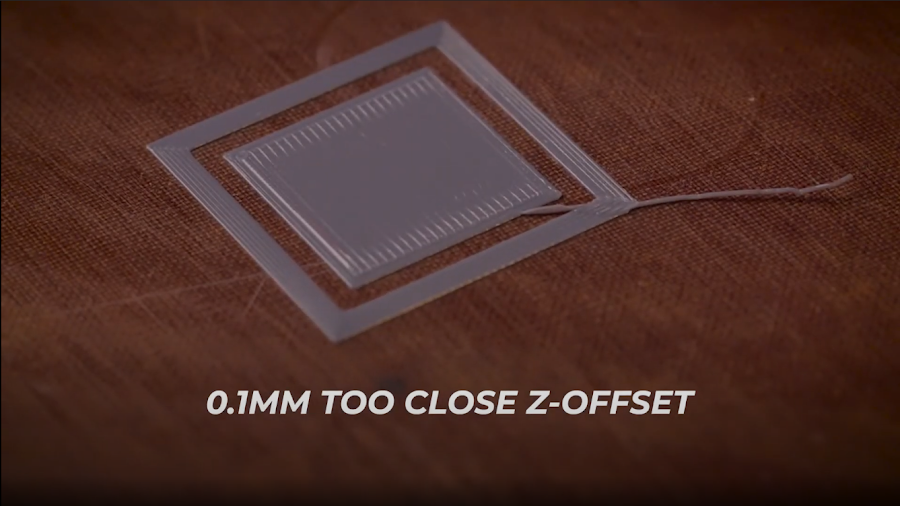 A calibration 3D print with the Z-Offset set approximately 0.1mm too close.

A first layer that is “0.05mm too close” is almost perfect. This sort of first layer is acceptable and isn’t likely to lead to complications, other than creating a tight fit if it needs to fit in a different part. There is some bunching up of filament near the edges, but not enough to cause any major issues. 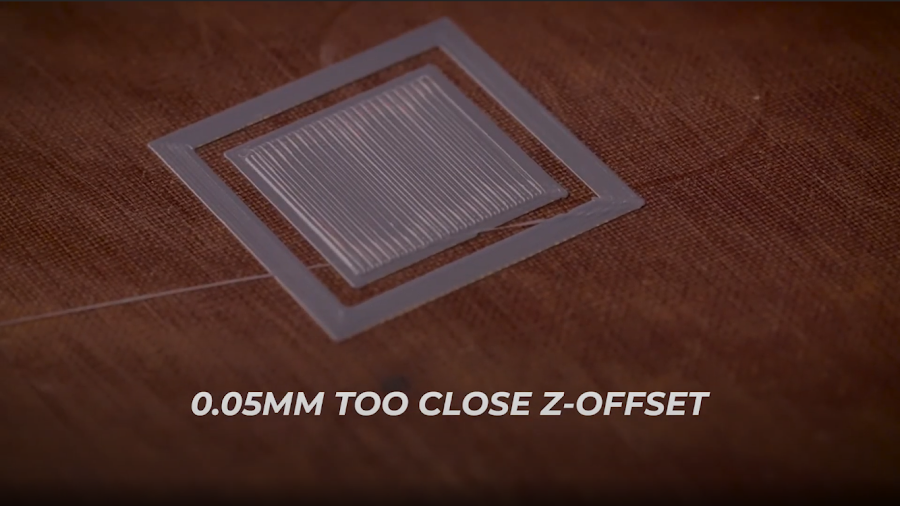 A calibration 3D print with the Z-Offset set approximately 0.05mm too close.

“0.05mm too far” and you start to see between the infill as the solid infill is only slightly squished into each other. You may not be able to see through the gaps in this layer, but with this offset you are beginning to lose surface area touching the build plate, and therefore bed adhesion. 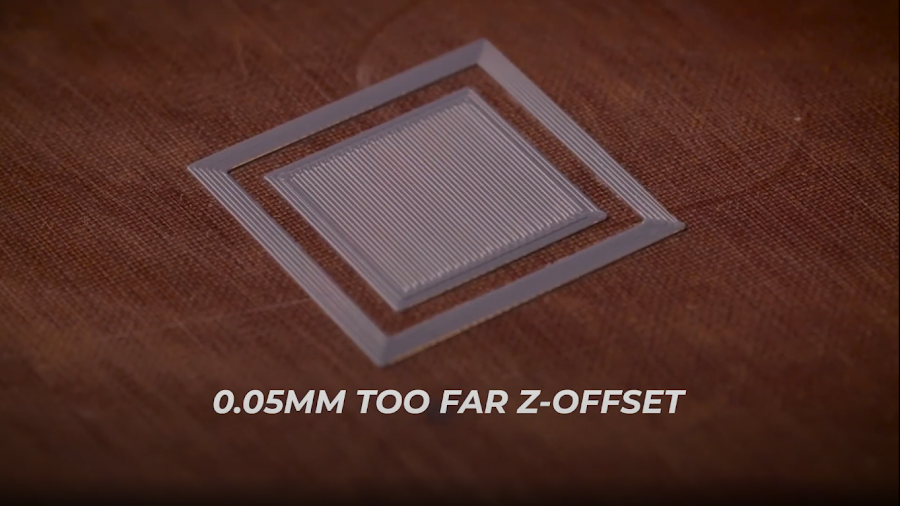 A calibration 3D print with the Z-Offset set approximately 0.05mm too far.

At “0.1mm too far”, you will begin to experience lifting, maybe at the corners or at thin features. At this point, the infill lines are easily seen without fully adhering to each other and are able to be split apart from the perimeters or even each other. If you're lucky your part stays adhered to the bed throughout the print. Even so, that print may be slightly too tall as the first layer wasn't squished down enough. It may only be 0.1mm too tall, but that may be enough to provide complications for joinery that doesn't have that sort of wiggle room. 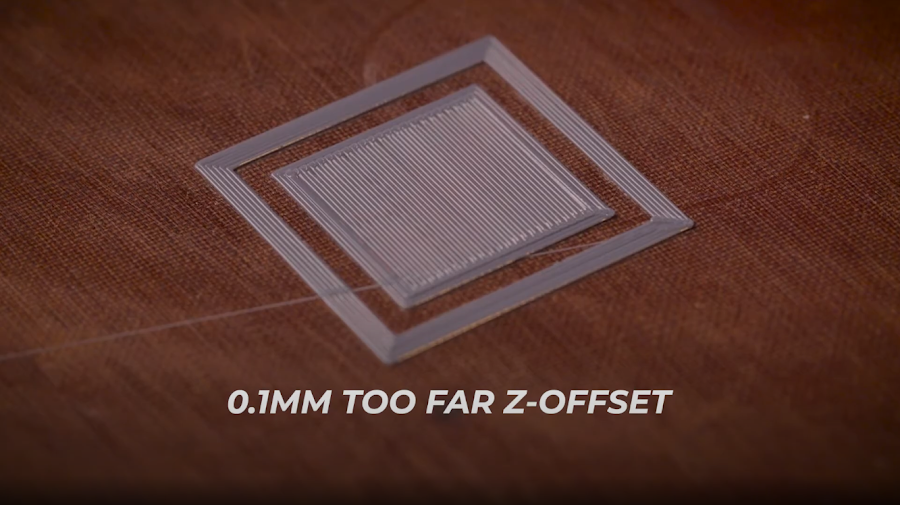 A calibration 3D print with the Z-Offset set approximately 0.1mm too far.

Your printer either has manual or automatic bed leveling hardware capabilities, and it may also have some helpful wizards and features to make it easier to set your first layer, while others often lack those features and require a more attentive touch. Even if your printer doesn’t have an automatic bed leveling sensor doesn’t mean it can’t be upgraded. The BL-Touch is one of the most commonly chosen bed leveling sensors for upgrades as it works on nearly every bed surface and is easy to install and test.

What is a Wizard?

Just like computers and other electronic devices, 3D printers often have built-in wizards to help guide someone with any level of 3D printing knowledge - even those that are brand new to 3D printing. These wizards will usually take the form of a guided walkthrough of the different steps you will need to take to make a change, like prompting you to adjust some thumbscrew for the heated bed or moving some sensor out of the way. Not every printer has one, but in general these are used on printers that have the room on their screens for a verbose and coherent explanation of what you need to do. 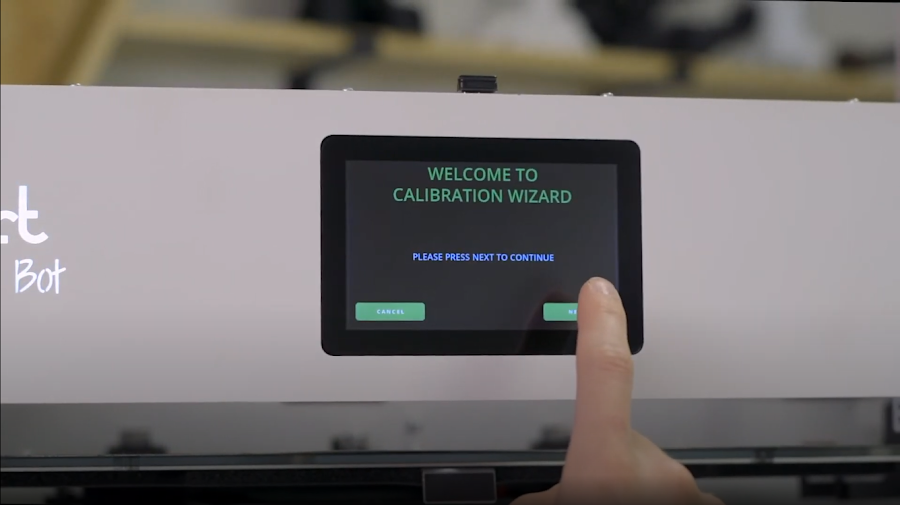 A Calibration Wizard on the Craftbot FLOW IDEX XL that walks the user through setting a perfect first layer.

What is an Automatic Bed Leveling Sensor?

Automatic Bed Leveling sensors (ABLs) are used in the place of setting the first layer by a user’s sense of touch and calibrating by eye and instead calibrate the first layer consistently with some electronic sensor. They come in many different forms with some better at detecting materials than others, like inductive probes being able to consistently detect metallic objects from nearly the same distance every time, but they are not able to detect anything non-metallic whatsoever. Or there are IR sensors that don’t require touching the bed surface to detect the bed, but have a tough time registering bed materials that are too reflective. Because there is so much variety in how they work, installing them differs for every form factor if you are choosing to upgrade a printer.

While most 3D printers that include a bed leveling sensor will also feature some code in the firmware to make it easier to use, in the form of a wizard, not all 3D printers will have additional aids. Some home built 3D printers may have a sensor but no wizards to back them up, which requires a hands-on approach to successfully adjust the first layer Z-Offset. It’s not often that users will need to consider this approach, but if you’d like to learn more about how this process differs, you can read more about it here.

Without any additional features to make setting your first layer easier, you will have to  recalibrate your level bed. A bed that is perfectly leveled but is 1mm too far away from the nozzle at the start of a print is as good as a bed that starts 100mm away, so you need to know how to level your bed properly, and for that it’s important to watch our bed leveling guide here.

The Craftbot Plus Pro features a guided leveling procedure, moving the print head over the bed leveling screws as you manually turn the thumbscrews to adjust the bed. Some printers can get complex with their wizards and take even more of the guesswork out of first layer calibrations. The BCN3D Epsilon W27’s wizard will print multiple lines side by side and ask you which one looks best, then remember the Z-Offset used to produce that result and apply that to the firmware, saving the offset for all Gcodes printed on that specific machine. 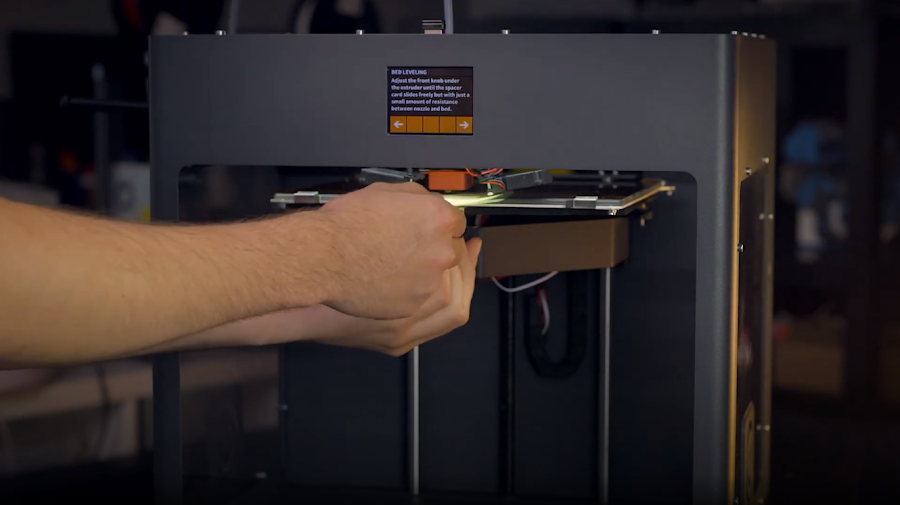 The Craftbot Plus Pro being levelled utilizing a guided manual bed levelling process.

This is one of the most hands-off processes that you can have for your first layer. The sensor will detect the relative mesh of the bed using the probe, then apply the currently saved Z-offset before running through a test print that you can adjust with babystepping to create a clean first layer. It’s really that easy. 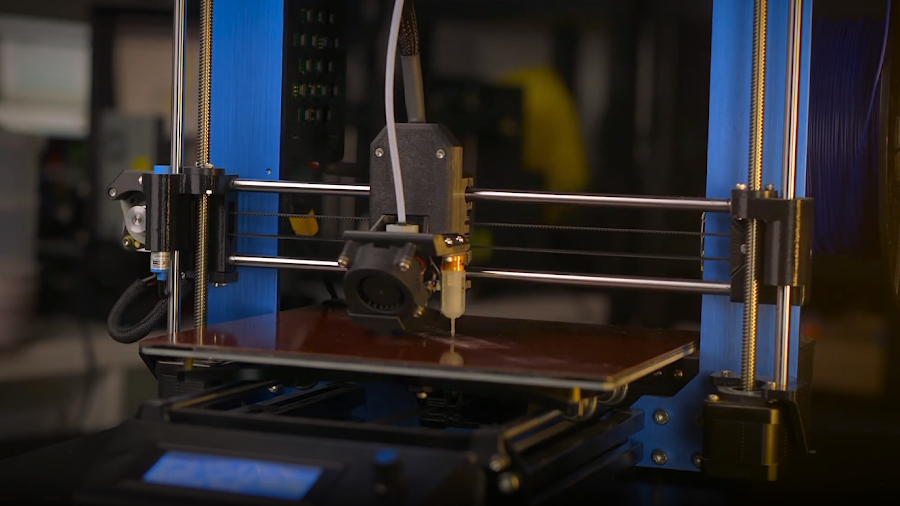 After a few runs it will be easy to identify a  perfect first layer, but this guide should offer guidance to point you in the right direction to become an expert in troubleshooting your 3D prints and calibrating your 3D printers in no time. If this guide has proven helpful to you and gives you a better understanding of what to look out for in a first layer and how to diagnose whether or not you need to make adjustments to your 3D prints, be sure to check out some of our other 3D Printing Essentials tutorials to help you develop your 3D printing skillset.