Desk organization can be tricky when things get busy - print out some key parts and reclaim some lost space and create new space at the same time.
Alec Richter
(EDIT)
Add a Comment | View Comments

With the many projects I am juggling at once, it’s really easy for my desk to get cluttered. Either I’m planning out the next Weekend Build or putting together the current one and 3D prints tend to pile up. A couple coworkers built themselves desk risers to combat their clutter, so I set out to do the same for the Creative Team.

Each of the desk risers needed to accomplish a couple things: 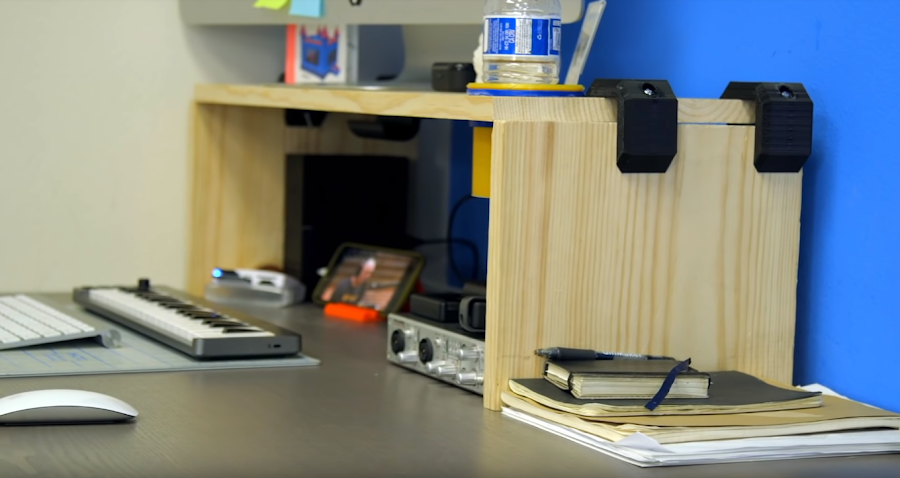 I knew I was going to need a lot of parts printed fairly quickly, so I set up a miniature print farm, like someone might if they intended to make desk riser “kits” using the various printed parts that make up this project. For my print farm I relied on three of Creality’s latest printers: the CR-20 Pro, CR-10S Pro, and the Ender 3 Pro. I also went with MH Build PLA filament since it’s reliable, easy to print, and I have an array of colors to choose from which would check the “semi-customizable” box off my list. 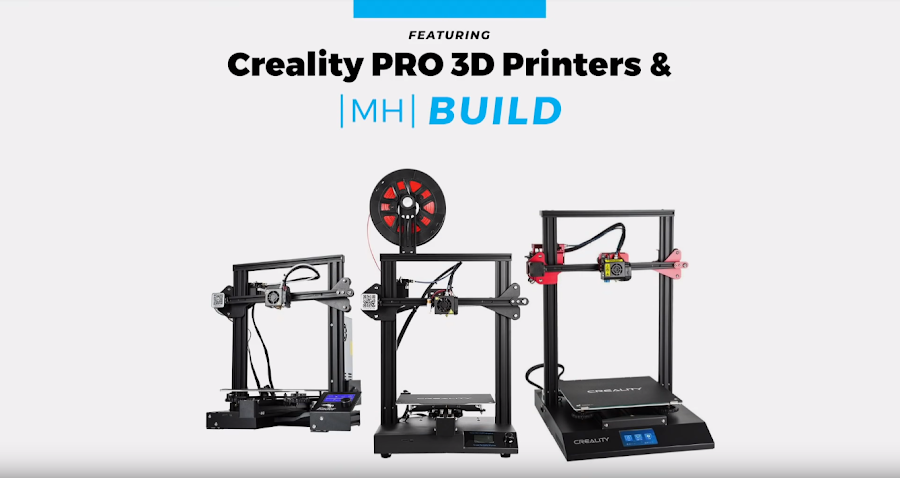 This project was made possible using some of the newest 3D printers from Creality and MH Build PLA.

Designing and Printing the Desk Risers

I recently purchased some corner clamps for a personal project - they’re clamps designed to hold two pieces together at ninety degree angle so you can glue and screw them together. That seemed like a great concept to start with, so I set about modeling some corner clamps that could hold two pieces of wood together and use as few pieces of hardware as possible. One half of my clamp would serve as the brace, it would be what holds the two pieces square with each other. The other piece would be the clamp - tightening it down would squeeze the two boards together to keep them aligned against the brace. To give myself room, I based the designs around 1” thick boards, so if I used anything smaller it would still fit. I added some chamfers here and there for some basic style and started printing them out.

Printing these I went with a 0.3mm layer height for speed, 20% infill, and 3 perimeters so the pressure of the clamp didn’t crack the parts. For each desk I chose a separate color: MH Build PLA in black, grey, and white, and I batch printed them on the CR-10S Pro. 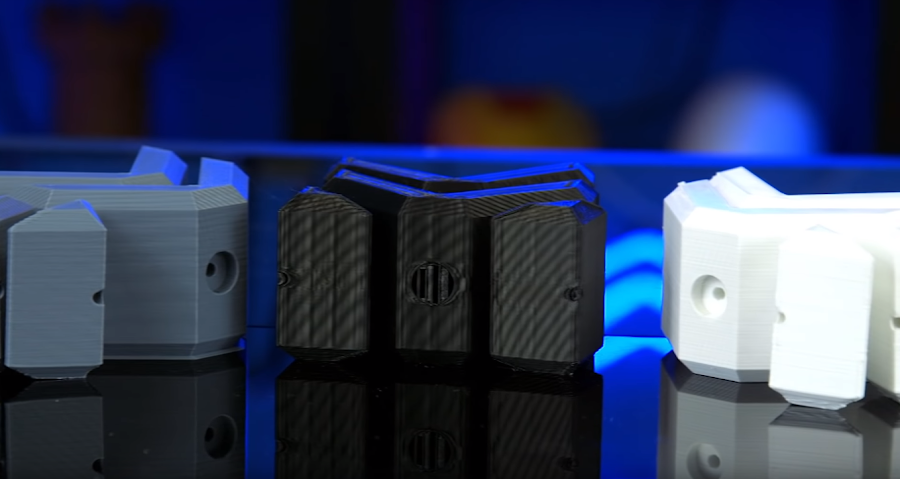 The finished clamps printed in a variety of MH Build colors.

Whenever I’m working on a project that utilizes wires of any sort (setting up a new computer station, building a 3D printer, wiring up a project) I am always anxious to get started with tidying up the wiring rather than leaving it where it works but is messy. I wanted to create a couple different things that would help these risers look a lot tidier; a cable grommet in the top of the riser and a wire run on the bottom. These two were fairly simple to make since the grommet could be reverse engineered from another coworker’s desk that came with one and the wire run would just be a simple hook that was stretched out. For the grommet lid, I wanted to rely on the natural snap-fit you can get using the layer lines of the 3D print to keep the lid on, since gluing it would mean breaking it apart to get cables out and screws seemed excessive for a simple grommet. I experimented with what the printer I was working with could achieve the right fit, and found that a 0.25mm gap between the cap and the base was just the right fit to let it snap in.

I was able to print two sets at a time on the Ender 3 Pro’s magnetic flexible bed, which made part removal really easy and I could quickly move on from one batch to the next, and I used MH Build PLA Brown. To match the experiments I ran for press fitting, I printed each piece at 0.3mm layers, and since these wouldn’t face a lot of wear, I went for a 10% infill and 2 perimeters. 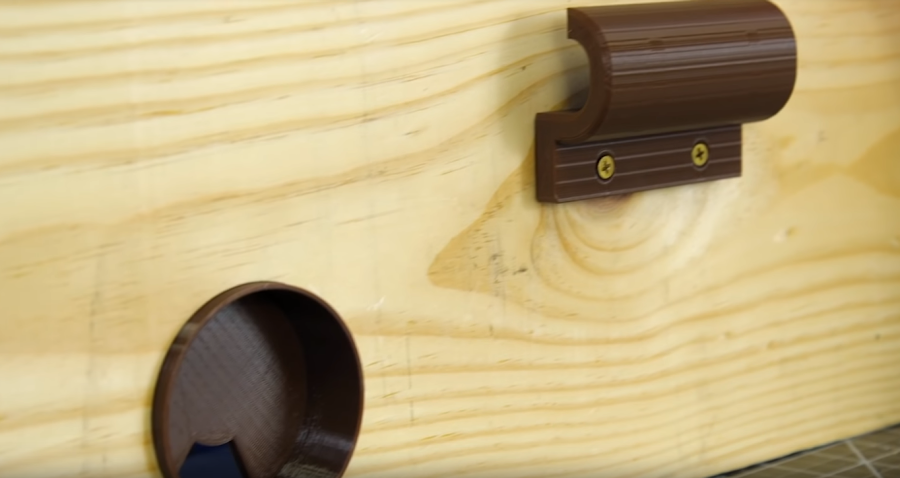 Ready for some cable organization using the new grommet and hook.

Designing and Printing a Catch All

To continue on with the theme of customizability, I wanted to create something that could act as a base for future ideas, so we wouldn’t be locked in with what I could first come up with. Something like the grommet where it’s a hole through the top of the riser, but keeping the freedom to swap it out later. It’s basically a cup holder, but I made a couple different versions: one with some holes in the base for condensation or one with a solid bottom to use as a pencil holder instead. Later I could even come back and decide I want some dividers in it so I have a small tray in one half and pens and pencils in the other. In designing this, I was specific in the contours of it to make it printable without any support, and I did this by adding chamfers to overhangs and mating faces so they would slot together.

The flexible magnetic build plate and automatic bed leveling of the CR-20 Pro made it really easy to print a couple of these at a time and quickly batched through them. I asked the rest of the team what color and version they wanted their set in and printed them in MH Build PLA orange, grey, blue, and gold. 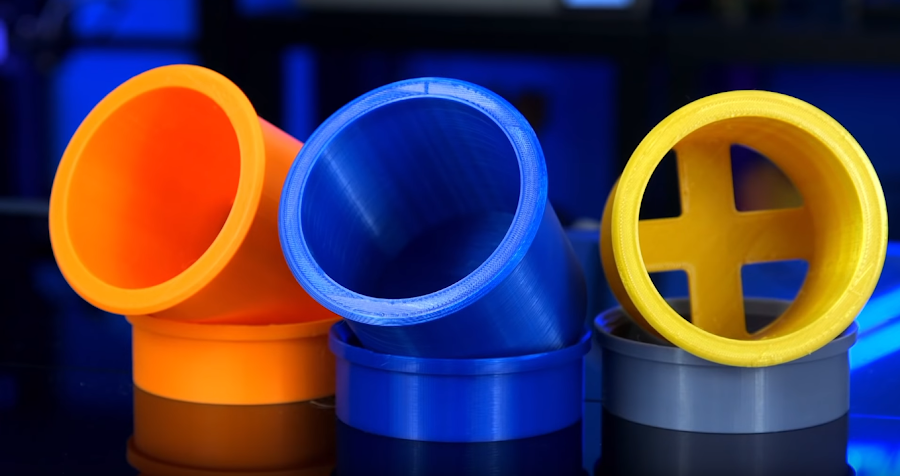 The Catch All makes for easy customization and swapping between a pencil holder or cup holder.

At this point, all the printing was done and I had to get to assembly. We got some 4’ x 1’ x ½” boards from the hardware store and chopped 9” off the end to make up the legs. I did this using a table saw, since that’s the tool we had, but you could just as easily use a circular saw, jigsaw, or even a hand saw for it. Mounting the corner brackets was super simple; just four bolts and nuts per riser, screwed them together and made sure everything was aligned before tightening them down.

The grommet and catch all needed holes cut out for them, and while I would have preferred using plain old power tools, we actually didn’t have any on hand to get the job done, so I had to set up a CNC 3D Carver to cut out these two holes. If we had the tools, I would have drilled a hole out big enough to fit a jigsaw blade, and closely matched a tracing of the hole size I would need. To install the printed parts, I just used a little super glue on the areas that would contact the wood, sprayed a little accelerator, and spun it in place to smear all the glue across the surfaces. Then I can snap on and drop in the attachments. 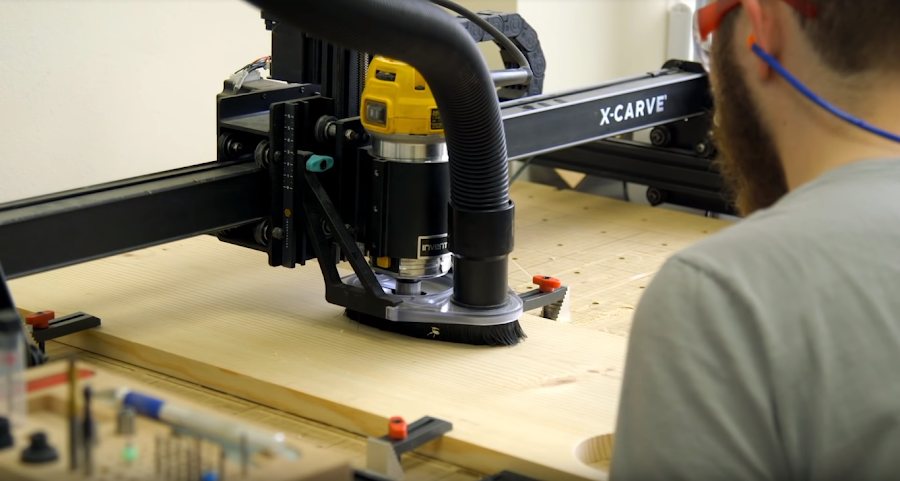 Cutting holes can be done a variety of ways, but the easiest way for me was using a CNC 3D carver.

As we continue on with our new desks and see where we need to develop our reorganization we can always go back and reprint some new additions. And if by popular demand other coworkers in the office want desk risers of their own, it would be really easy to get everyone outfitted and set up now that we there is a print farm with all the files ready to go (which you can also download from the Design Store here) and a process nailed down. Do you utilize an array of printers for batch printing? I’d love to hear about what you’re creating!
Happy printing! 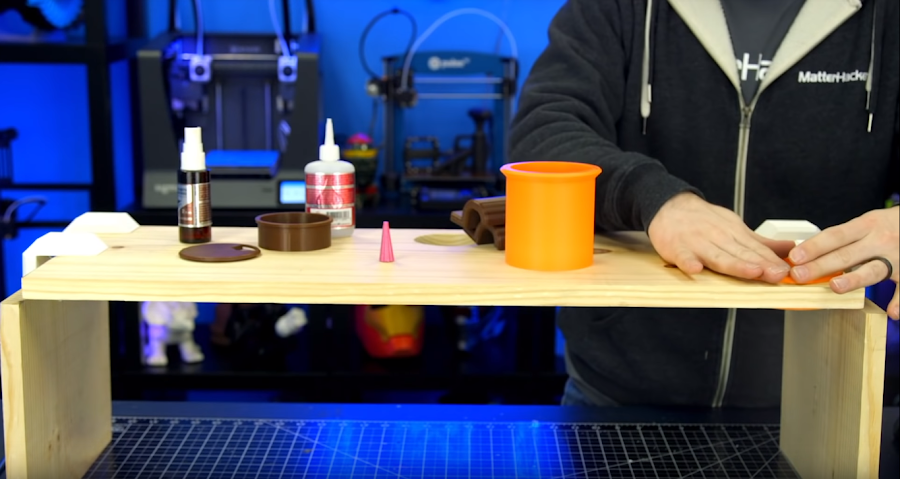