With over a dozen 3D printer models, it can be challenging to discern which Creality 3D printer is right for you, fortunately this guide will walk you through their features.

Finding the right 3D printer for you and your projects can be a challenging task if you don’t know what features to keep an eye out for. When Creality offers over a dozen 3D printers with similar names and profiles, it can be difficult to determine what makes each one shine. Let’s take a look at some of Creality’s most popular 3D printers (the Ender 3, Ender 3 V2, CR-10 S5, Ender 5 Pro, and Ender 5 Plus) and see how they stack up with each other.

Let's jump into it-

Creality 3D Printers at a Glance

With Creality 3D printers, there are clearly two size classes for their machines: standard and large format. The Ender 3, Ender 3 V2, and Ender 5 Pro have the same usable build plate size of 220mm by 220mm, but the Ender 5 Pro eeks out an extra 50mm in the Z axis making its 300mm build height an attractive alternative to the 250mm build height of the Ender 3 and Ender 3 V2. In comparison the Ender 5 Plus is a considerable upgrade in size and by moving the bed along Z instead of along Y like the Ender 3s or CR-10 S5, it has a much smaller footprint despite its 250mm by 350mm by 400mm build volume. That being said it still doesn’t have the largest build volume of them all, as the reigning champion among all Creality printers is the CR-10 S5 with its gargantuan 500mm by 500mm by 500mm build volume. This does significantly affect its printing speed as you have a lot of mass moving forward and back, but that’s the tradeoff for having such a large build volume. 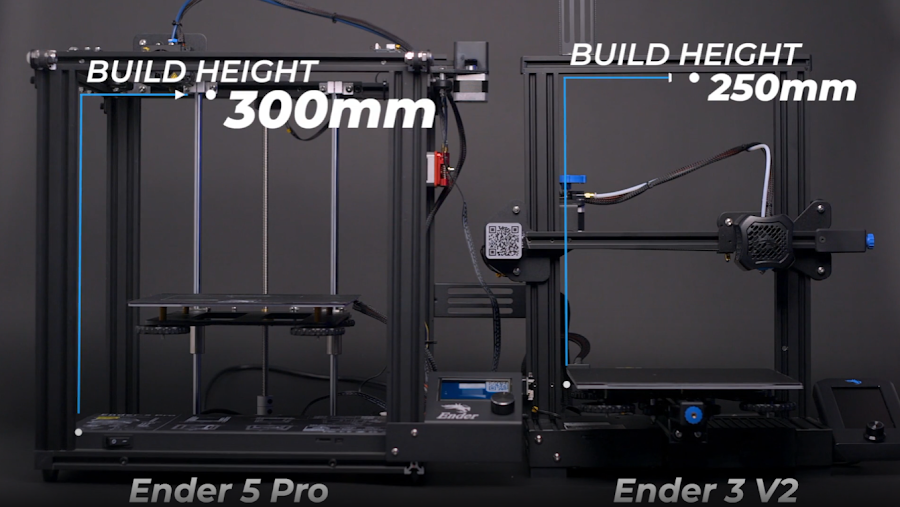 The Ender 5 Pro and Ender 3 V2 are almost the same height, yet because of how the Ender 5 Pro is constructed it has nearly 100mm more build height.

Depending on where you intend to keep your Creality 3D printer, the volume of it may be a factor you want to consider; you may want a quiet 3D printer if it is going to be set up next to you on your desk, but if it’s part of a print farm in its own room then volume probably won’t matter. The Ender 3 V2 and Ender 5 Pro both feature motherboards utilizing TMC stepper drivers picked for their quiet and reliable operation. With TMC drivers your first layer will be virtually silent, but once the layer cooling fan starts up it will reach a noticeable, but consistent volume. On the other hand, the Ender 5 Plus CR-10 S5, and Ender 3 all feature stepper drivers that, while reliable, don’t make any effort to suppress their volume and make considerable noise during motion. 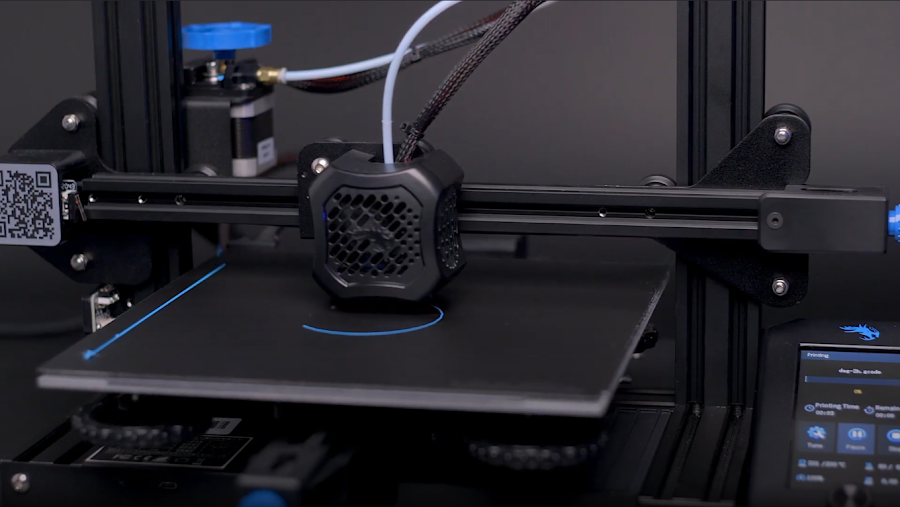 On the Ender 3 V2 the layer cooling and heatsink cooling fans are the loudest part of the system; motion is whisper quiet.

For the most part, Creality 3D printers are known for being bowden extruder setups, where the motor pushing filament is mounted to the frame rather than the print head, and these 5 models are no exception. In their efforts to keep costs low, Creality utilizes a consistent extruder setup across most of their 3D printers. All but the Ender 5 Pro use an injection molded extruder housing with an idler under spring tension. Some like the Ender 5 Plus and CR-10S5 use a runout sensor to automatically pause the 3D print once it detects that filament has completely passed through it. The Ender 3 V2 has an injection molded knob on the drive gear to make loading, unloading, and manual jogging an easy task (a feature absent on the Ender 3). Unlike the rest, the Ender 5 Pro uses an all-metal extruder housing for long-term durability and upgrades the bowden tube from regular PTFE tubing to Capricorn PTFE tubing that was designed specifically for 3D printing and even has a slightly smaller internal diameter to further constrain filament as it is guided to the nozzle. 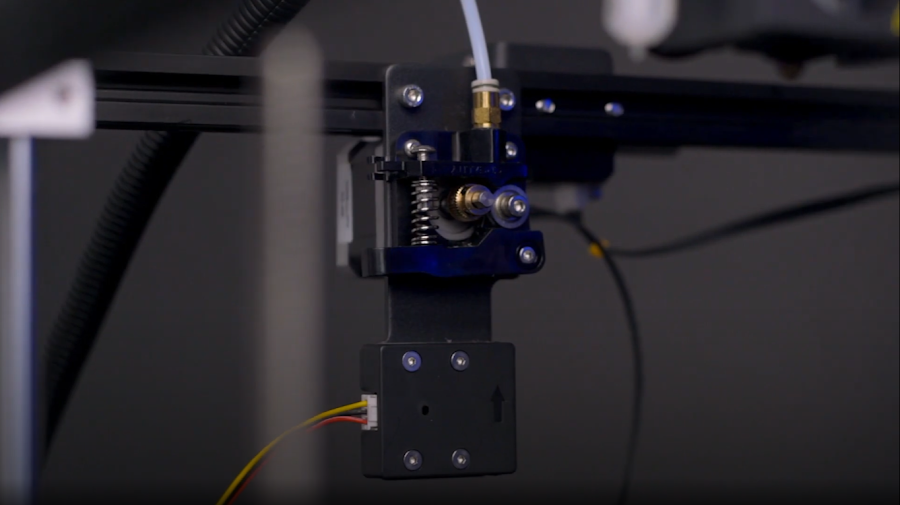 A filament runout sensor on the Ender 5 Plus prevents your print jobs from failing because you ran out of filament before the job ended.

Nearly every Creality 3D printer uses knobs and springs below each corner of the bed to adjust the plane that it rides in. Every printer in this list features these knobs in some way, although the CR-10 S5 uses a smaller knob style than the easily adjustable knobs of the rest. However, once you have the bed set, the Ender 5 Plus does have a genuine BL-Touch to compensate for any deviations of the bed and ensure that the nozzle is always the same distance from the bed for proper bed adhesion. 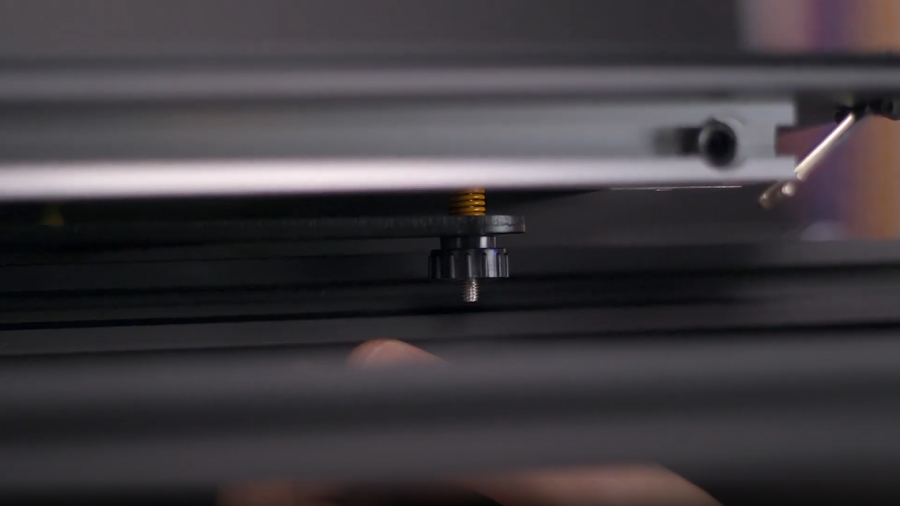 As Creality designs their own hotends to match their machines, they all have relatively the same heating capabilities (with maybe a few degrees difference here or there). The CR-10 S5 has the lowest hotend temperature overall at 240°C, with the Ender 3 V2 at 255°C, and the Ender 3, Ender 5 Pro, and Ender 5 Plus all at 260°C. Just as you might expect on such a large bed, keeping it heated can be challenging which once again means the CR-10 S5 has the lowest capabilities at 80°C, followed by the Ender 3 V2 at 100°C, the Ender 3 and Ender 5 Plus at 110°C, and the Ender 5 Pro surpassing them all at 135°C. In practical terms, this means that you can print with most materials available on each machine, but certain materials’ ideal printing temperatures are right on the threshold of the maximum nozzle temperatures, like PETG or nylon, and some brands may not print well. The low bed temperature of the CR-10 S5 will make printing with notoriously warpy materials challenging if not downright impossible, like ABS, and with an ideal nozzle temperature around 300°C Polycarbonate is actually impossible on all Creality machines. 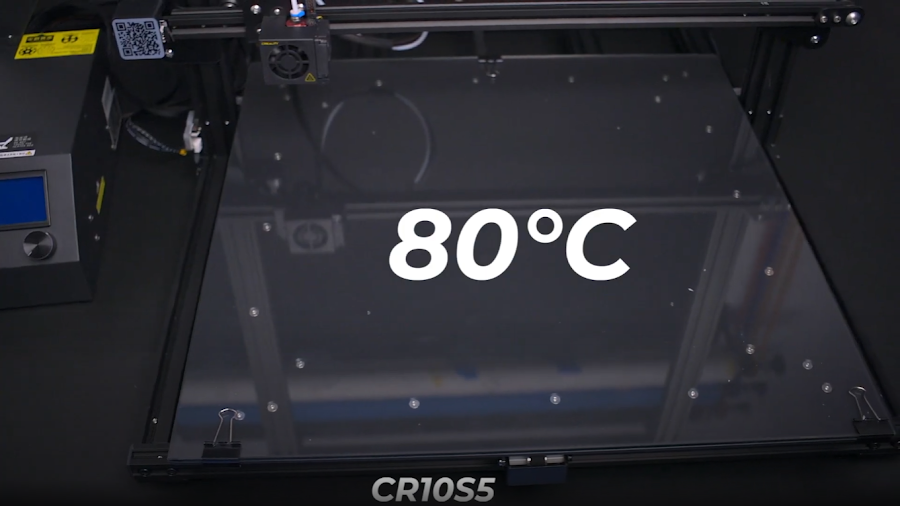 With such a large bed the CR-10 S5 struggles to reach temperatures any higher than 80C, effectively making its maximum build plate temperature limited by its size rather than the hardware.

In most cases you will find Creality 3D printers have one of two types of beds: glass, or an adhesive sheet. Some of them have the added advantage of a magnetic backing for the adhesive sheet so you can completely remove the bed, flex it, and peel off the 3D print without having to wait for the bed to completely cool down or involve sharp scrapers. You can find these magnetic beds on the Ender 3 or the Ender 5 Pro. For the Ender 5 Plus and Ender 3 V2, a “carborundum” coated glass bed gives you a very flat surface to work with and a coating that helps your prints stick without any additional adhesive, but you will have to wait for the bed to cool down to remove your 3D prints. Included with the Ender 3 V2 Maker Bundle is a full BuildTak Flexplate System upgrade so you can bring the magnetized bed functionality to your Ender 3 V2. The CR-10 S5, however, just has a simple glass bed without any coatings for the primary goal of being as flat as possible across such a large area, a job it does fairly well. 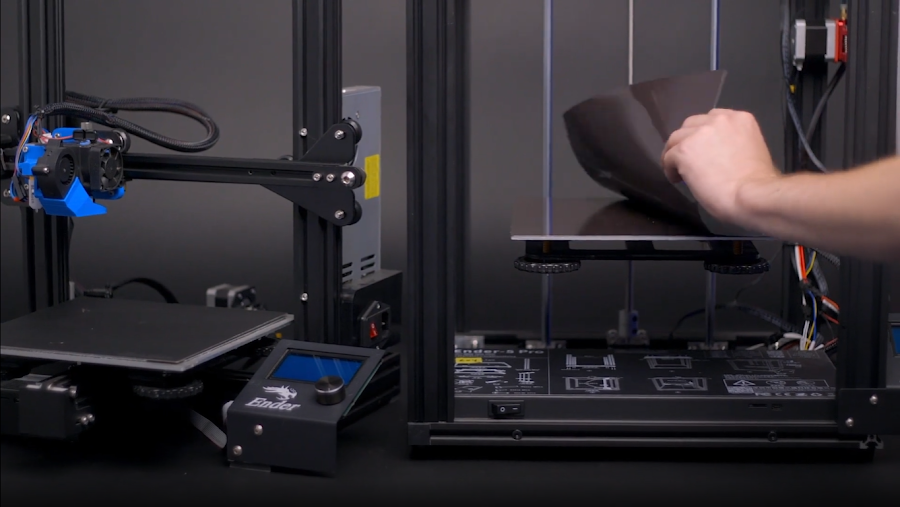 Creality has positioned themselves as the affordable, hobbyist 3D printer brand, and as such their printers are well below the $1,000 price tag. With how modular and incremental each version of their printers are, you will find that the base models are minimal in features (basically just enough that’s needed to print well and reliably) with a price point to match, and later models with slightly more features will still only cost slightly more. Think about the Ender 3 as the no bells, no whistles 3D printer, but it’s less than $200. If you want something a little quieter, a better screen, and some tune ups here and there, then you go with the Ender 3 V2 Maker Bundle. 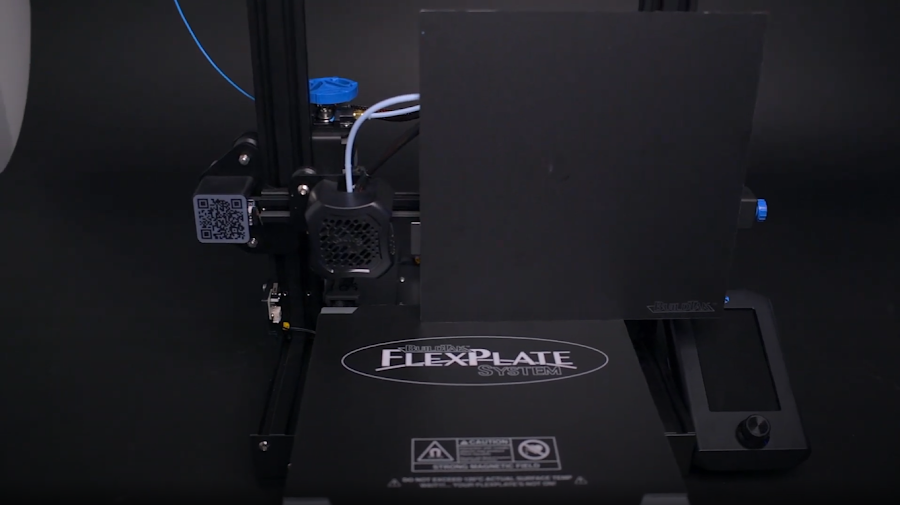 The Ender 3 V2 Maker Bundle is an all-inclusive package that brings all you features you want to the Ender 3 V2.

In part because of the low prices of every Creality 3D printer, huge communities exist to modify and customize these machines to suit every unique need. Some upgrade the extruders with drop-in replacements like Bondtech’s DDX or MicroSwiss’s all-metal direct conversion kits. Others choose to swap out the build plate for a magnetic flexible system or 3D print custom mounts to incorporate other more complex hotend components like the E3D Hemera. Where you save money on having 3D printers that work great out of the box but don’t have the features of high-end 3D printers, you gain the ability to pick and choose the exact configuration that you want and be able to buy those upgrades over time instead of biting it off in one purchase. 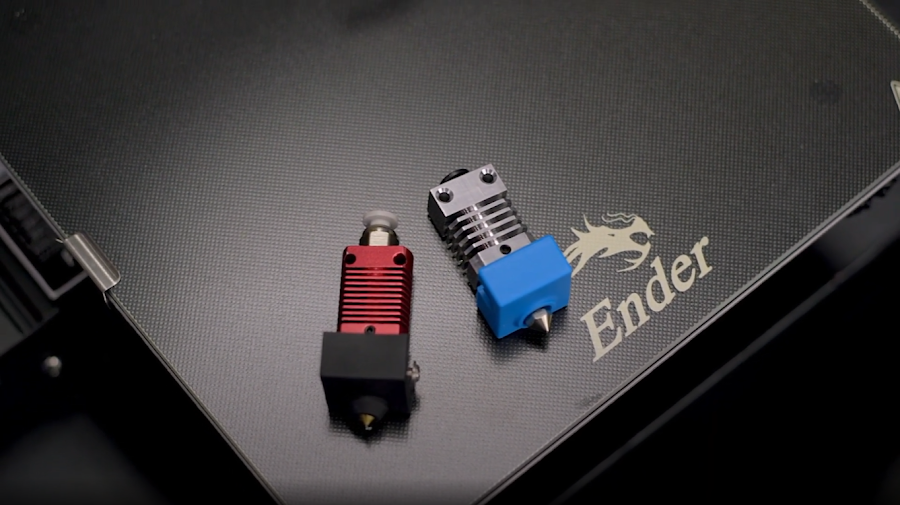 Whether it's a drop-in replacement from MicroSwiss or a custom designed and mounted E3D Hemera, Creality 3D printers are incredibly customizable.

Affordability is the name of the game with Creality, so you can dip your toes into the 3D printing waters or quickly build an entire print farm without breaking the bank. Hopefully you have a much better understanding of the differences between some of Creality’s most interesting machines and can make an educated decision when choosing yours. To learn more and order your affordable Creality 3D printer today, check out the collection here.